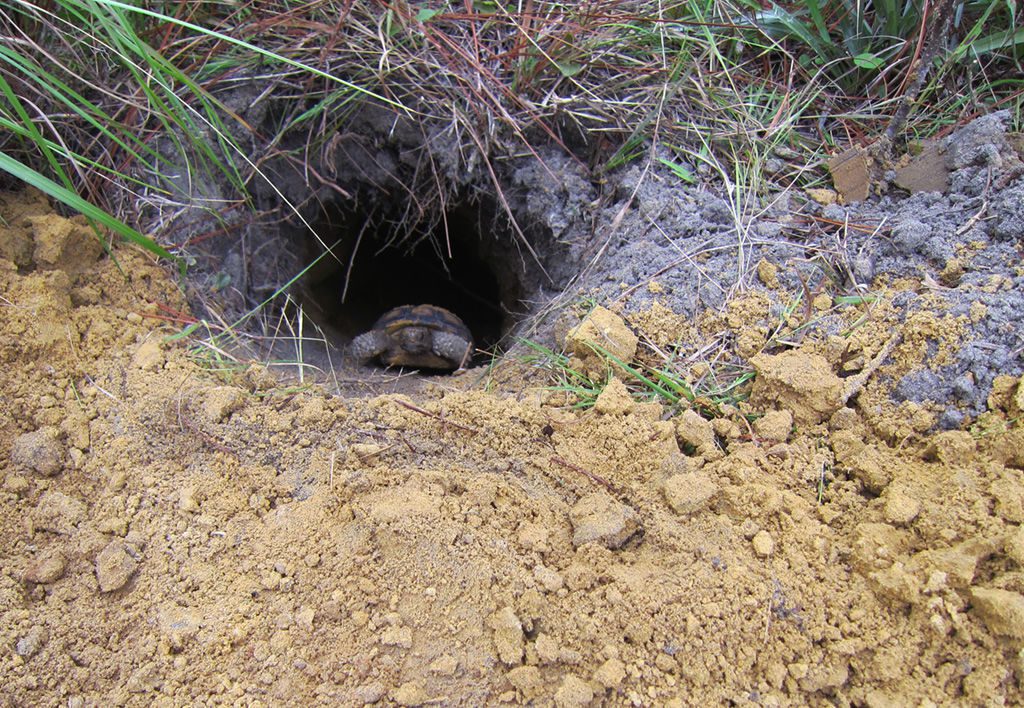 Why care about gophers?

Fred and Suze Peace live on Orange Camp Road on DeLand’s south side, surrounded on all sides by new development. They’ve been tireless in their efforts to subdue the subdividing and to create environmental awareness. Before developer D.R. Horton cleared land for Huntington Downs, west of the couple’s property, Suze Peace identified and marked only four gopher tortoise burrows on the site. When backhoe operators arrived, they told her they were waiting for biologists to assist with the tortoise removals. The heavily wooded parcel, with few sunny patches, was not ideal tortoise habitat, explaining why so few were found, she said. When Peace discovered that one of the burrows remained, she contacted Chris Wren, forward planning manager with D.R. Horton, who arranged for the tortoise’s removal and relocation. Her follow-up included calling Horton’s environmental-consultant firm, BioTech, and being told that all of the tortoises had been taken to certified relocation land in northwest Florida. Suze Peace also is concerned about the Sherman’s fox squirrel. She fears more clearing for the Victoria Hills expansion, along with chemicals sprayed on the golf course at the treed edges where the animal used to live have decreased or destroyed the squirrel population. —Erika Webb

In 2007, the Florida Fish and Wildlife Conservation Commission stopped issuing incidental take permits, which allowed the killing of gopher tortoises during development.

But some long-held permits are still valid. One belongs to Victoria Park developer The Kolter Group.

The permit’s broad parameters give developers the choice to relocate the reptiles, which are classified as threatened by the state, or “take” them.

“Take” is not as benign as it sounds.

“It means buried alive,” said Steve Tonjes, a retired Florida Department Of Transportation biologist and current chairman of the DeLand Planning Board.

In exchange, the developer set aside wetlands and uplands for wildlife habitat.

In 1991, when incidental take permits were first issued for gopher tortoises, biologists for the Florida Fish and Wildlife Conservation Commission feared that relocating tortoises (as opposed to killing them) could spread to healthy tortoise colonies a flu-like disease the animals are subject to. Further research indicated the disease wasn’t that serious. Incidental take permits were discontinued due to increased biological knowledge of disease pathogens, and public and stakeholders urging FWC to end the entombment of gopher tortoises, Samantha Dupree, an FWC gopher-tortoise biologist, said.

FWC acknowledged 1,034 acres of gopher tortoise habitat would be affected by the development, among Victoria Park’s nearly 2,000 acres. The agency OK’d the bulldozing of burrows — which kills the tortoises and destroys their eggs — during site preparation for construction of 4,000 homes.

The permit has no expiration date.

The developer may take the burrows and tortoises or relocate the reptiles to approved conservation areas on the Victoria Park acreage, according to Samantha Dupree, an FWC gopher-tortoise biologist.

The permit may be amended to allow relocation off-site to agency-approved areas.

Kolter’s permit requires protection of at least 110.7 acres of tortoise habitat within Victoria’s identified tortoise-preserve areas, and grants a perpetual conservation easement on that land to the FWC.

Another 246 acres of preserve habitat and other open-space areas also are off limits to taking.

The permit also prohibits destruction of scrub jays or their habitat, and the developer is required to consult with the U.S. Fish and Wildlife Service if the federally protected birds are present.

As clear-cutting continues on large tracts of land there, area residents, concerned about the gopher tortoise and other wildlife, show up at Planning Board and City Commission meetings to protest.

In November, at one such meeting, D.R. Horton attorney Tara Tedrow tried to reassure DeLand Planning Board members and residents who attended.

Tedrow said only 31 gopher-tortoise burrows had been identified on 74 acres earmarked for the first of several phases of the new Victoria Oaks subdivision along Blue Lake Avenue and Taylor Road. Ultimately, Victoria Oaks will be 171 acres.

Most of the tortoises in the area are established and safe, along the protected utility easements cut through the acreage, Tedrow said.

The remainder, she promised, will be relocated.

DeLand-based Camelot Custom Construction owner Tanya Ebersole builds single-family homes on small lots and multi-acre parcels. She’s a stickler for knowing and following the rules laid out by Volusia County and state environmental agencies. When preparing a small lot for construction, Ebersole identifies gopher tortoise burrows and marks them. Volusia County’s environmental specialists typically do not examine larger, wooded parcels, she explained. They require the builder to hire a certified biologist. County staff and the Florida Department of Environmental Protection guide Ebersole through the process. If the lot is large and they recommend a biologist do the survey, it can get very expensive. To save my customers money, I survey the lot myself first, and mark all turtle burrows with a stake and ribbon, and then confer with my customers to see if we can change the location of their home, driveway, well or septic so that the turtles can stay on their property, Ebersole said.

“The builder is not allowed to use any machinery to clear or mow the land before performing a gopher-tortoise survey. So it is a slow process to do it on my own,” Ebersole said. “But it’s worth it. I’ve never had to relocate a gopher turtle yet, have protected many on my building sites, and my customers like having them around once they are aware of them and the reasons they are protected.”

Burrows discovered a certain distance from construction activities are surrounded by a protective barrier, Ebersole said.

Sandwiched between the Horton developments, but not part of Victoria Park, is Sawyer’s Landing, where Maronda Homes is building.

Last summer, Carissa Kent, founder of Saving Florida’s Gopher Tortoises, was involved in a volunteer effort to excavate and relocate tortoises there.

“We’d had a lot of rain, and it was very wet in there, not ideal for gophers,” Kent said.

Nine were found and taken to a certified relocation site.

Kent left her job at the Seminole County Sheriff’s Office and started the nonprofit rescue group in 2006. Her efforts have saved more than 5,000 gopher tortoises, she said, in collaboration with The Humane Society of the United States and working closely with FWC, developers, environmental consultants, other nonprofits and residents. The work involves outreach, permitting, field operations, rescue, transport, data collection and gopher-tortoise release.

But, Kent said, with thousands of incidental take permits still valid across Florida, exponentially more of the reptiles die each year.

Retired biologist and Victoria Gardens resident John Serrao regularly leads nature walks through the preserves at Victoria Park. Serrao said he is satisfied that many species in the area are faring well, including gopher tortoises and scrub jays, as well as bobcats, deer, bears, bald eagles, hawks, river otters and more. He’s concerned, however, about the Eastern indigo snake and the Sherman’s fox squirrel, which, he said, seem to have disappeared. If you want to see how Kolter Homes makes the land ready for its homes, just take a quick drive into Victoria Hills right now, Serrao advised.

He described the area south of the golf course, visible from State Road 472. “At the end of that road, you can see where Kolter completely removed what was once a beautiful forest of big old oaks,” Serrao said. “The area is clear-cut and bulldozed, with trees just piled up off to the side and the entire area desolate. This is near where I used to see fox squirrels.”

Serrao has not seen an Eastern indigo snake since 2013, right about the time post-recession construction started in Victoria Park. Unlike the Eastern diamondback, the indigo has a very fast metabolism and requires a very large area to live and feed, Serrao said.

She said she has worked with D.R. Horton to rescue the reptiles before site development, but has not been contacted by Kolter to assist in Victoria Park — possibly because tortoise relocations there are done on-site.

“The impression I got was that Kolter is very tortoise-friendly,” Kent said.

Two components ensure success: a very good backhoe operator, and a good place to relocate the animals, he said.

Because of the permit, relocation isn’t required in Victoria Park. Whether it’s being done, however, isn’t easy to determine. Kolter did not respond to calls and emails seeking comment.

In 2016, when Kolter cleared land for model homes near the Orange Camp Road entrance to Victoria Gardens, Victoria Gardens resident and retired biologist John Serrao said he witnessed individuals relocating about a half-dozen gopher tortoises to the preserve area.

He questions whether that is taking place elsewhere in Victoria Park.

Barbette Lerro has lived in Victoria Hills for seven years. A narrow treed buffer separates her property from a cow pasture to the south.

Lerro sees turkeys, sandhill cranes and some other feathered frequenters but nothing unusual such as deer, bears or gopher tortoises, she said.

Kolter’s recent clear-cutting to State Road 472 for the expansion of her community took Lerro aback.

“Where are the animals supposed to go?” she said. “I’m for progress, but we can’t leave them with no place to go.”