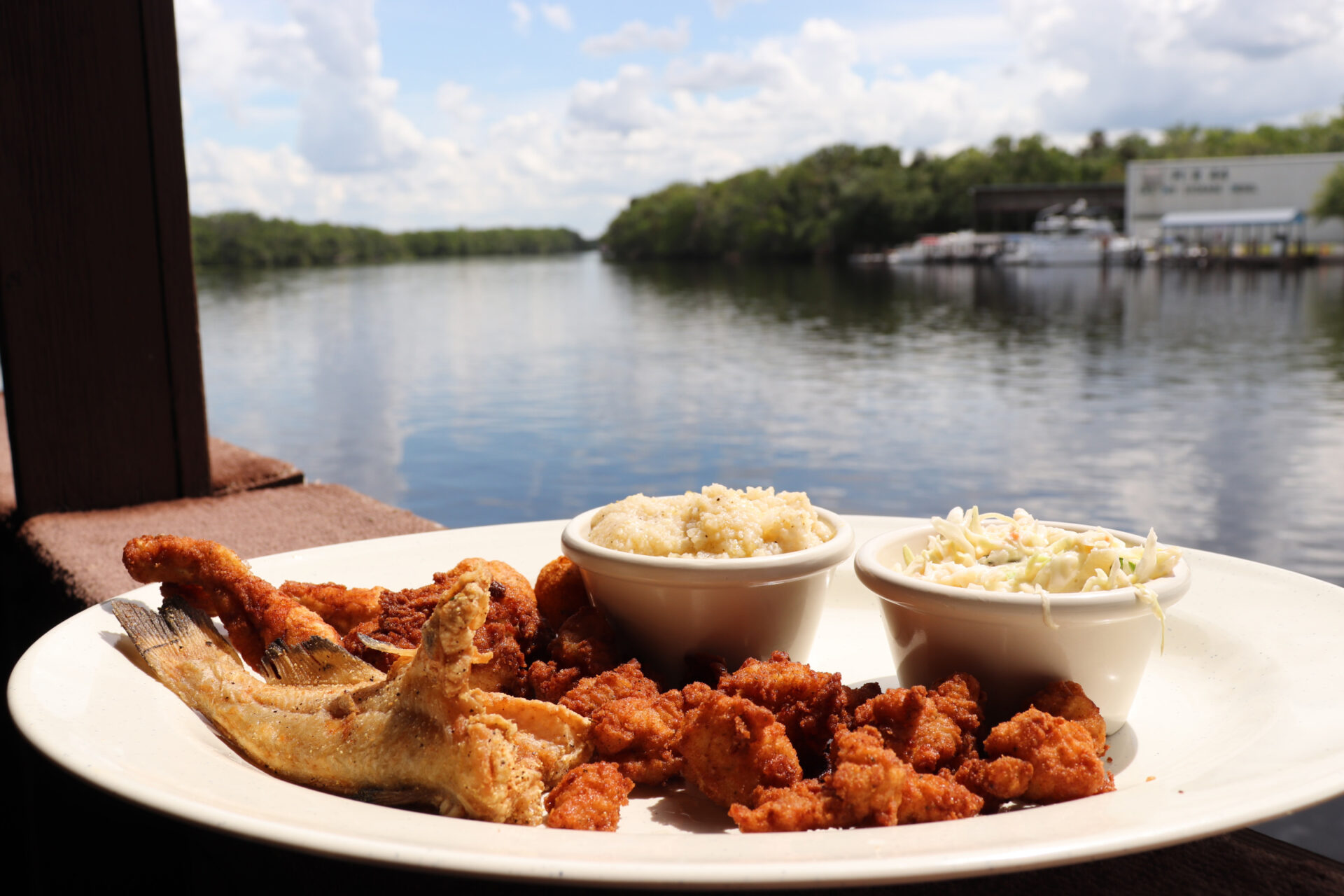 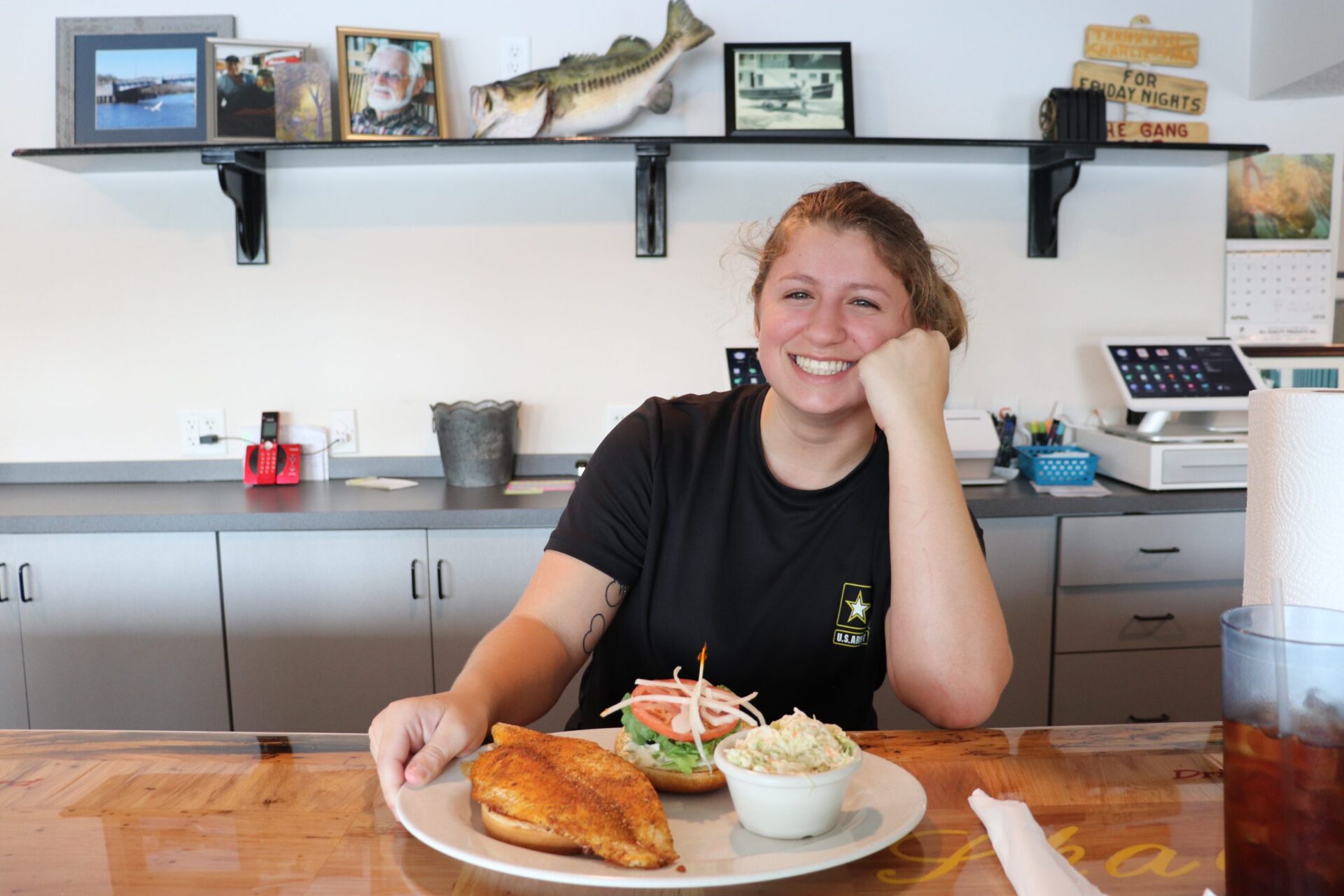 On Feb. 17, owners Tiena and Charles Gall reopened the popular eatery after a full restoration.

The rustic restaurant sits at the river’s edge at 2984 W. New York Ave. in DeLand, on the eastern shore of the St. Johns. Shady Oak offers a view of the Francis P. Whitehair Bridge, which carries State Road 44 over the river. You can also see the boats that travel up and down the St. Johns.

On the re-done walls inside the restaurant, you’ll find a mounted largemouth bass and comforting quotes such as “Enter as strangers, leave as friends.”

Outside is a small covered patio with tables and a dock, where travelers can tie up their boats and dine while enjoying the picturesque views.

Next door to the restaurant, Shady Oak has a bait-and-tackle shop for those wanting to purchase bait or rent a boat for the day to cruise the river.

I sat at the bar and looked over the restaurant’s menu, which features such local fare as catfish, frog legs and gator tail.

“We obtain our local fare from Sanders Fish House in DeLand, delivering our guests the fresh-caught catfish right from our own backyard,” Tiena Gall said.

In addition to seafood, Shady Oak has American classics such as burgers, chicken wings, soups, salads, and a large selection of sandwiches.

Before she and her husband became Shady Oak’s owners, Tiena Gall worked as a prep cook in the kitchen, then transitioned to a waitress for about 10 years. Charles Gall was a customer before they purchased the establishment in 2012.

I ordered the Shady Oak sampler, where you can pick three or four options from a selection of choices. I chose frog legs, catfish fingerlings and gator bites (and my favorite house sauce in which to dip the bites), accompanied by the homemade coleslaw and grits.

The fried frog legs were large and juicy, made from an original recipe dating back to the days when Shady Oak was owned by Otis and Myrtle Sloan. Some locals and regulars still respectfully refer to the restaurant as Sloan’s.

In the back corner of the restaurant is the tiny kitchen, so small that it does take a while to get your food when the place is busy. Shady Oak’s food and atmosphere get great reviews on Facebook, but there are complaints about the wait time for food.

However, the atmosphere is conducive to hanging out and enjoying the river.

“We are not a fast-food restaurant; I think we have the world’s smallest kitchen,” Tiena said.

Established in 1954, Shady Oak has been a popular spot since the beginning. In the early days, it was a hangout for Stetson University students, many of whom still celebrate a yearly reunion at the eatery.

On Friday afternoons, regulars and locals gather out front and enjoy some cold beers as the week comes to an end.

Shady Oak Restaurant currently opens at 10:30 a.m. for lunch and stays open till 9 at night. The Galls plan to open for breakfast in the near future.