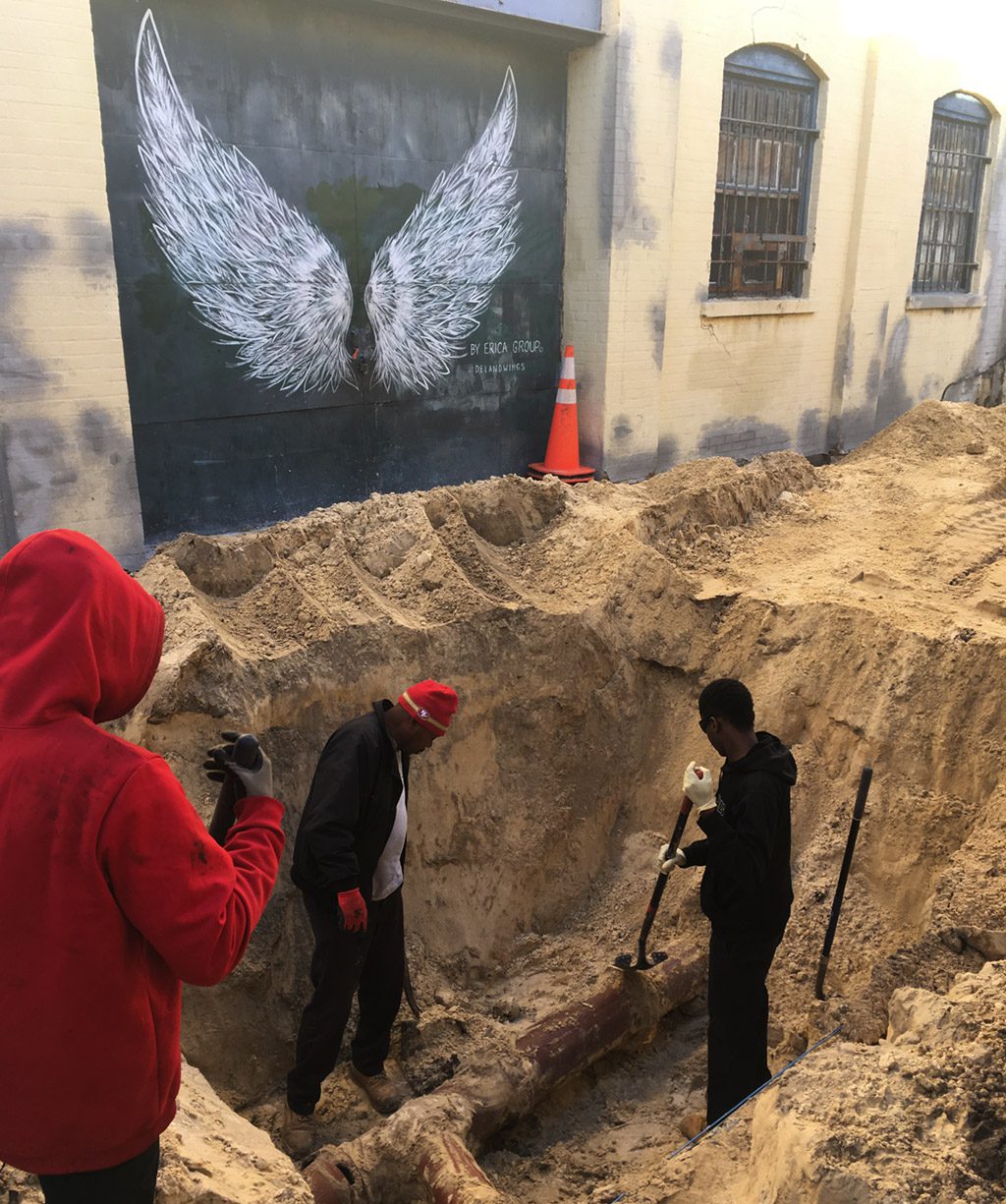 It’s unusual for an alley to be the subject of lengthy debate; Pill Alley was the exception. After vigorous discussion at the April 16 City Commission meeting, the alley that is home to the DeLand Wings mural has a new name: Persimmon Lane.

The diminutive strip of pavement connects West New York and West Georgia avenues, running behind the 100-120 S. Woodland Blvd. block of buildings and along the east side of the Conrad Realty Co. complex that houses The Beacon’s offices.

Largely due to the DeLand Wings mural, the alley has become a popular destination and photo spot for visitors and residents. The alley is also heavily used by pedestrians to get to and from the businesses in the SoNY (South of New York) District.

After much debate among business owners in the district, DeLand city officials shortlisted four possible names for the alley: Wings Way (or Alley), Persimmon Lane (or Alley), Woodland Alley and Georgia Alley.

The City Commission took up the naming near the end of its April 16 meeting.

The issue generated more discussion than any of the other dozen-or-so items on the night’s agenda.

The discussion kicked off with Beacon publisher and Conrad Realty Co. proprietor Barb Shepherd and some historical context.

“You’ll notice that it’s just called ‘Alley,’” she said, pointing out the alley on a 1920s-era plat book.

Shepherd also showed plans for the interior and exterior of Touchton’s Drug Store at 100 S. Woodland Blvd. — the origin of the name Pill Alley.

Ella Ran, owner of Outsiders, a business with a storefront on the alley, spoke in favor of the name Persimmon Lane. She explained how she did some canvassing of nearby business owners, and found that many of them also liked the name.

“I took those four names, I sent them via email to all the interested parties, and also took a paper ballot and walked it around to the merchants in the area,” she said.

Ran said she got about 24 votes from business owners.

“Overwhelmingly, the choice was for Persimmon Lane or Persimmon Alley,” she said. “ … It has historical context, in that DeLand used to be called Persimmon Hollow.”

The name could also make it easier to direct people to the DeLand Wings mural, and to Persimmon Hollow Brewing Co., located at the southern end of the alley.

“I personally like the alliteration of Artisan Alley, and Persimmon something-with-a-P … but I certainly favor the name Persimmon because of the historical context of Persimmon Hollow, not the brewery,” DeLand Mayor Bob Apgar said.

“The two I saw were Persimmon Promenade and Path,” said Apgar. “But yours are not bad, either.”

Cafe DaVinci co-owner Melisa Reed expressed concern that the survey had not reached a wide enough audience to be representative of the community.

“I would ask the city and the commissioners to give it a little more thought and consideration of taking a little bit more of a historical approach,” she said.

Reed favored a name incorporating something that tied in more heavily to the historical landmarks of the alley, like a reference to the old Touchton’s Drug Store.

Apgar pushed back, saying the Alley name would mainly affect businesses in the area, and getting their buy-in was most important, rather than polling the whole community.

Shepherd got up to speak again.

“We’re already calling it alley, whether we’re calling it Wings Alley or Pill Alley,” she said. “Maybe that’s the compromise — just to call it Persimmon Alley.”

Compromise or not, the City Commission was no closer to a name.

“Somebody make a motion, please,” said a slightly exasperated Apgar.

Jessica Davis moved to dub the 300-foot-long stretch of pavement Persimmon Alley. The motion failed for lack of a second.

“If you look at the business owners, and I know they call it the alley, but do you want two alleys?” asked Vice Mayor Leigh Matusick. “You have Artisan Alley. Don’t you want that to be maybe something else?”

Matusick moved to dub the alley Persimmon Lane, which was fortunately — if reluctantly — seconded by Cloudman.

Local contractor Ken Goldberg rose to speak, and questioned the need to rename the alley at all, referring to the rich history behind the name Pill Alley.

He also wondered if having the alley share a name with a particular business would prove controversial.

Apgar pointed out that in the current context, Pill Alley might sound to those unfamiliar with the history like a place for illicit drug dealing.

Finally, the commission voted on Matusick’s motion. By a unanimous vote, the alley was dubbed Persimmon Lane.

However, another opportunity for a lively naming debate is on the horizon.

Apgar cautioned his fellow commissioners about the possible perils of wrongly naming the facility.

“If we come up with a very DeLand-centric name, some of the funding partners might say, ‘Well, I thought it was for all of West Volusia. Why are you calling it Persimmon Recovery Center?’”