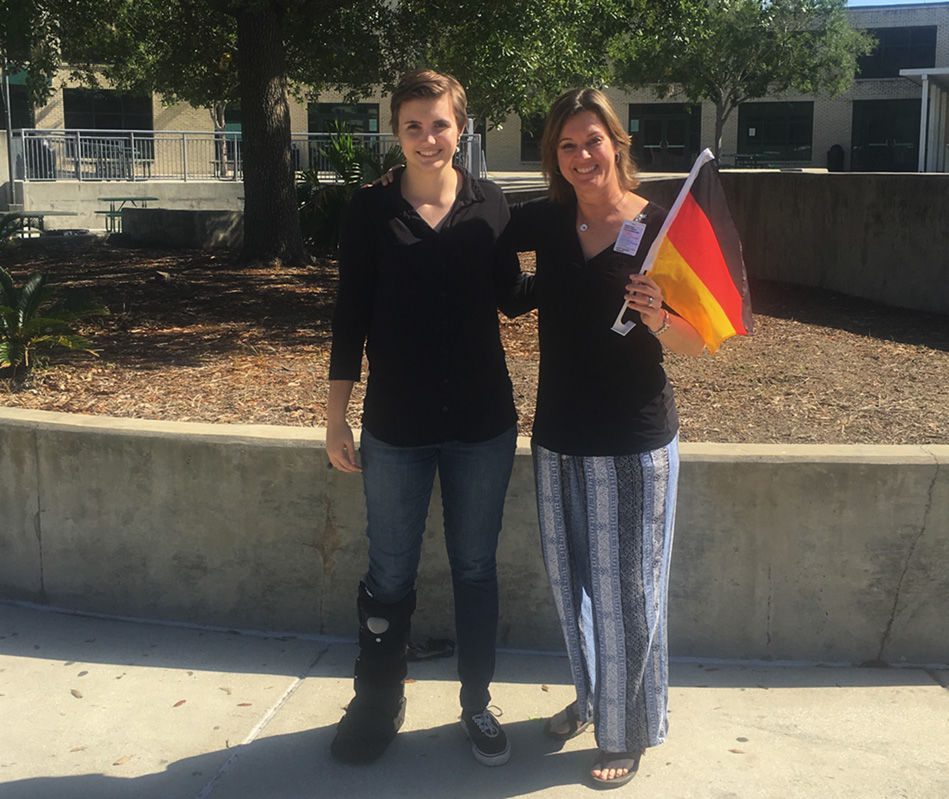 For one DeLand High School senior, an adventure awaits after graduation, thanks to her remarkable skill in the German language.

Eighteen-year-old Sarah Gaudreault will embark on a long plane ride out of the United States and live as a German student for a little more than two weeks this summer.

After a rigorous exam and interview process, Gaudreault was awarded an all-expenses-paid trip to live with a German host family and attend a German high school.

She was selected as a national winner in German language after scoring in the 96th percentile on the Level 4 National German Exam for High School Students. The American Association of Teachers of German sponsors the scholarship and exam.

While more than 20,000 students across the U.S. participated in the program, only 44 were selected to receive the merit-based full scholarship.

“It’s so exciting to be able to have this chance,” Gaudreault said. “You know you see pictures of Germany and other places, but most of the time you really don’t get to experience it. I am excited to have the opportunity to be totally immersed in the language and culture and become better at speaking German, but I am really excited to experience firsthand what Germany is like.”

The study-abroad trip includes round-trip air transportation to Germany from New York, a home stay with a host family, and excursions to places in Germany that have historical and cultural significance.

“This year’s prize winners are some of the finest students in the U.S.,” Keith Cothrun, executive director of the AATG, said in a press release.

The DeLand native is also the first in the Volusia County region to receive this award for her excellence in German studies.

Gaudreault is a highly involved student with a hand in multiple organizations at DeLand High School, including several extracurricular activities, as well as the International Baccalaureate program.

As part of the IB program, students take four years of a language.

German is Gaudreault’s fourth language. Her family is Canadian and speaks French. She also took Spanish during middle school.

“They say that it is easier to learn a third language if you have already learned one before, so, I think German came kind of naturally to me,” Gaudreault said. “But I also feel that German has many English cognates and Anglicized words that helped to make it easier to comprehend.”

“She has been a very hardworking student,” Sibio said. “We definitely have several students here at DeLand High School who are here to learn as much as they possibly can and really push themselves, and she is one of those students who have excelled in all of her studies, including German.”

Sibio and Gaudreault’s mother both encouraged her to try the American Association of Teachers of German program and apply for the scholarship.

The classes Gaudreault and the other 43 U.S. students will take in Germany include language courses that are tailored to meet the student’s needs. They will also have regular German school classes with their host brother or sister during the day.

To be eligible to apply for the program students must score in the 90th percentile or higher on the National German Exam, have a minimum of a B average, and be at least 15 years old.

Students who wish to apply also cannot live in a household where German is regularly spoken and cannot have visited a German-speaking country for more than two consecutive weeks since the age of 6.

Although Gaudreault has never been to Germany, she feels that being from a Canadian family whose members speak French to each other gave her an advantage in learning a new language.

After Gaudreault graduates from DeLand High School in May, she will attend Stetson University, where she hopes to study to be a marine biologist.

“I have thought about continuing my German-language studies as a minor, but I am not sure yet if I will. I think it will give me more diversity and a connection to German-speaking scientists in general, and a minor may help, but I have yet to decide what I will do,” she said.

Both Gaudreault and her teacher hope recognition of the program and the chance to study abroad will give other students incentive to take the German-language courses at DeLand High School.