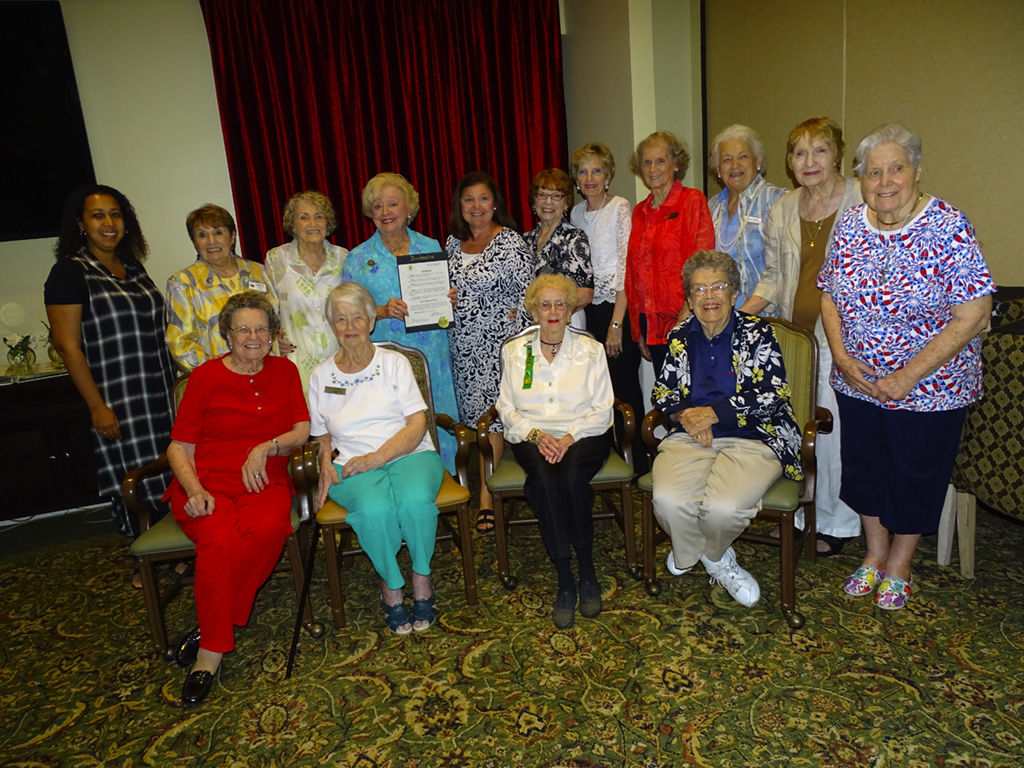 After more than a century of service, the Woman’s Club of DeLand is no more. Seventeen members distributed the club’s remaining funds to charities and said goodbye at a May 8 luncheon full of memories.

The can-do club that helped create a charity wing at DeLand’s hospital, varnished schoolroom floors and landscaped schools because no one else would, lobbied DeLand city government for municipal garbage pickup, wrapped bandages for soldiers and raised thousands of dollars for scholarships finally could not carry on, defeated by a changing society and a shrinking membership.

DeLand’s Woman’s Club got its start at a meeting of 30 women on the Stetson University campus in March 1906. It was formed as a branch of the national organization that had been founded in Boston in 1871 by a newspaper woman after she was denied entrance to an all-male Press Club event.

DeLand Mayor Bob Apgar spoke at the luncheon. He called the 112-year-old club “a shining example of leadership” and said the DeLand Woman’s Club’s accomplishments have had immeasurable positive effects on the community.

In 1988, in its 82nd year, the Woman’s Club of DeLand was 158 members strong. That year, the club received 23 awards from the national Woman’s Club for projects that included the Special Olympics, Evergreen Day School, The Neighborhood Center of West Volusia and Friends of the DeLand Library.

The busy and active club began making contributions to Hacienda Girls Ranch in Melbourne and supplied judges for the Volusia County Spelling Bee and Science Fair.

But with more and more civic clubs going coed, and most women working outside the home, membership began declining.

In 2011, the Woman’s Club donated the clubhouse at 128 W. Michigan Ave. that it had built in the 1920s to Florida United Methodist Children’s Home.

The Children’s Home sold the building in 2014. It now has been fully restored as a residence and is currently occupied by its second private owner.

Despite losing the building, the Woman’s Club soldiered on. Luncheon meetings of the aging membership continued — held at nursing homes and assisted-living communities.

Still, fundraising fashion shows provided money for an annual scholarship to be given to a graduating senior, a member of the Woman’s Club-sponsored Juniorettes at DeLand High School.

But, finally, with a limited number of active members to engage in projects and provide funds to support General Federation of Woman’s Club projects, a tough decision had to be made.

“This decision closes the long and illustrious history of an organization whose sole purpose was to promote the social, cultural and spiritual life of its members while lending support to all civic efforts for the betterment of the community,” longtime club member Jeanette Basile read from a history of the club presented at the luncheon.

“This was not a decision we took lightly, to end the club, and in fact, it’s painful,” the club’s final president, Carolyn Morrison, said. “But the members of many years, in their wisdom, realized there was no way to continue and voted to come to an end. Then, as of April 30, the end of our fiscal year, we closed.”