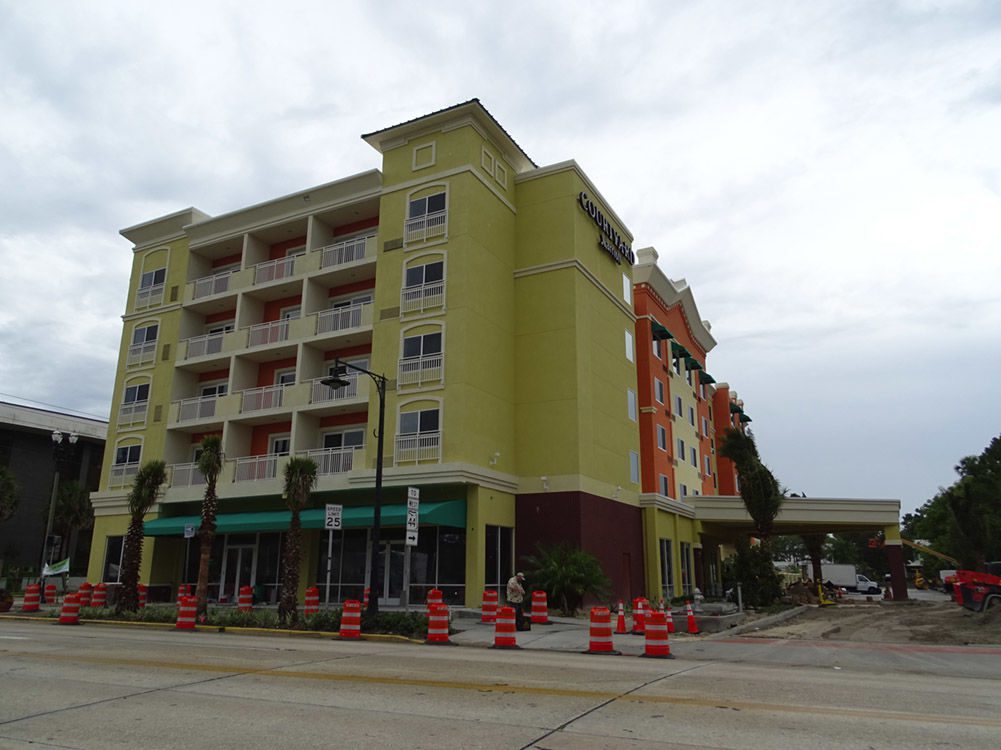 Completion of DeLand’s newest hotel continues to be waylaid by weather, but the Courtyard by Marriott should open by mid-July.

The much-anticipated hotel was slated to open in the fall of 2017, but Hurricanes Matthew and Irma, followed by a lot more rain, prolonged work on the five-story building, and the tentative opening was moved to April 2018, according to Ajit Nana, a senior vice president for the developer, Avista Properties.

Two months after the second planned completion date, Nana said, weather continues to be an obstacle.

“We are getting close,” Nana wrote The Beacon in an email June 4. “The continuous rain the past two weeks has delayed us.”

While workers installed the awning June 4, Nana said in a phone interview, much more remains unfinished.

“The parking lot has to be completed and striped, signs — and the monument sign — have to be installed,” he said. “The technology side of things … internet, telephone, integration with the Marriott systems.”

The hotel’s 104 rooms are furnished, but the fitness center awaits equipment and the lobby remains bare, he said.

After filling those gaps, workers will deep-clean the entire building, and building officials will perform final inspections before the City of DeLand issues a certificate of occupancy, Nana said.

“Once we get the CO, it takes another three weeks before we can open the doors to the public,” he said. “We have to get the staff fully trained on the Marriott system. It all has to happen in kind of a sequence.”

Construction on the building at 308 N. Woodland Blvd. started in the spring of 2016.