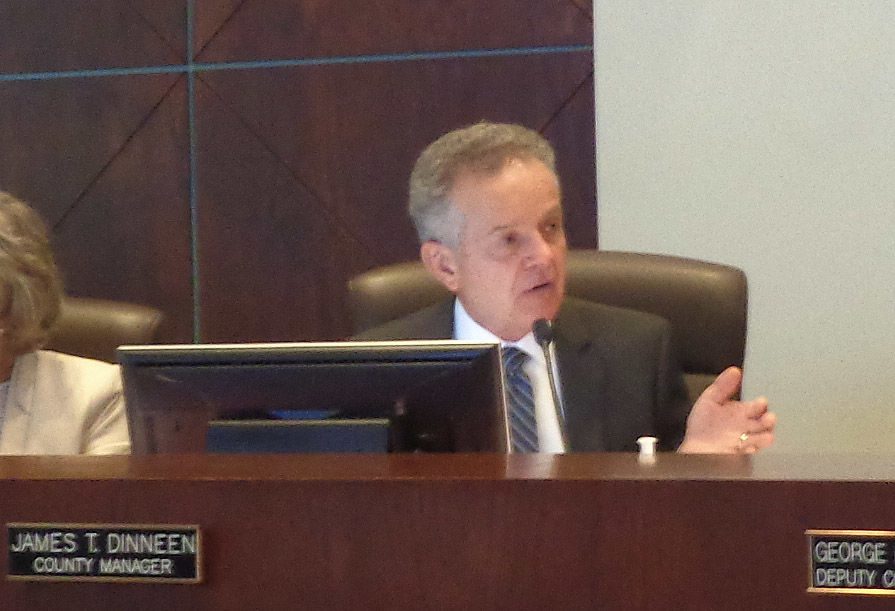 After 12 years of serving as chief operating officer of the enterprise known as the Volusia County government, Jim Dinneen is preparing to exit.

News of Dinneen’s pending departure comes in his resignation letter addressed to County Council members. The resignation becomes effective Jan. 11, 2019. Dinneen has so far not responded to The Beacon’s request for an interview.

“They say time flies when you’re having fun. If so, then that explains why the last 12 ½ years in Volusia County have been fabulous and fleeting,” he wrote in the June 13 letter, adding he has been supported in his work by “an evolving cadre of professional staff second to none anywhere in the public sector.”

Dinneen said his remaining time as manager will be quite busy.

“We will muster through a budget season, hurricane season, and election year together, allowing the Council ample time to follow whatever manager selection process it chooses and leaving a little time at the end of the year for relocation by the new leader, if necessary,” he wrote.

Dinneen’s decision to step down was not as sudden or surprising as it may seem to people on the outside of the organization, according to County Chair Ed Kelley.

“Shocked, a little bit,” replied Kelley, when asked for his reaction to Dinneen’s resignation.

Kelley added he had learned of Dinneen’s intentions to leave during a one-on-one meeting June 7, as the two were preparing the agenda for the upcoming June 19 County Council meeting.

“He said, ‘I think I may be due for a change,”’ Kelley recalled. “He said he’d been thinking about it since the first of the year. I said, ‘Think about it.’”

Kelley added that Dinneen had told him he had received offers of opportunities from local governments elsewhere across the country, and “even from the private sector.”

“I have always wanted to embark upon at least one, if not two more career opportunities after my stint as Volusia County Manager,” he wrote, noting later that he is leaving “with some semblance of youth on my side of the balance sheet.”

“He’s been here 12 years, and in the term of managers, that’s a long time,” Kelley said, noting Dinneen’s thoughts about leaving came about over time. “Last March or April, he said he did not know how much longer he was going to be working. He said, ‘I’ve been doing this for 40 years.’ He also said his wife wants to spend more time in the Chicago area.”

“He’s been there a long time,” Lowry told The Beacon. “I’ve always enjoyed working with him. He’s very professional and well-organized.”

“I thought he might stay on another year or two,” Lowry added.

Lowry dismissed suggestions about the County Council’s rather spirited June 5 debate about the uncertainty in the Medical Examiner’s Office — with the resignation of a newly appointed forensic physician and her complaints about conditions in the county morgue and staffing — as a factor in making Dinneen feel no longer welcome.

“It’s something we really don’t have any control over. It’s a state mandate,” Lowry said, regarding the agency and the manager’s decision to hire an interim medical examiner, Dr. Jon Thogmartin, to restore confidence in that office.

As for finding Dinneen’s successor, Lowry declined to predict how he and his colleagues may go about a search.

“I don’t know what kind of process they will want. I want to sit back and hear what everybody else says,” he said.

Dinneen came to Volusia County in 2006, having served as city manager of Dayton, Ohio. His annual salary as county manager is $249,046.

“It’s been great working with him. I hate to see him go,” Lowry concluded.