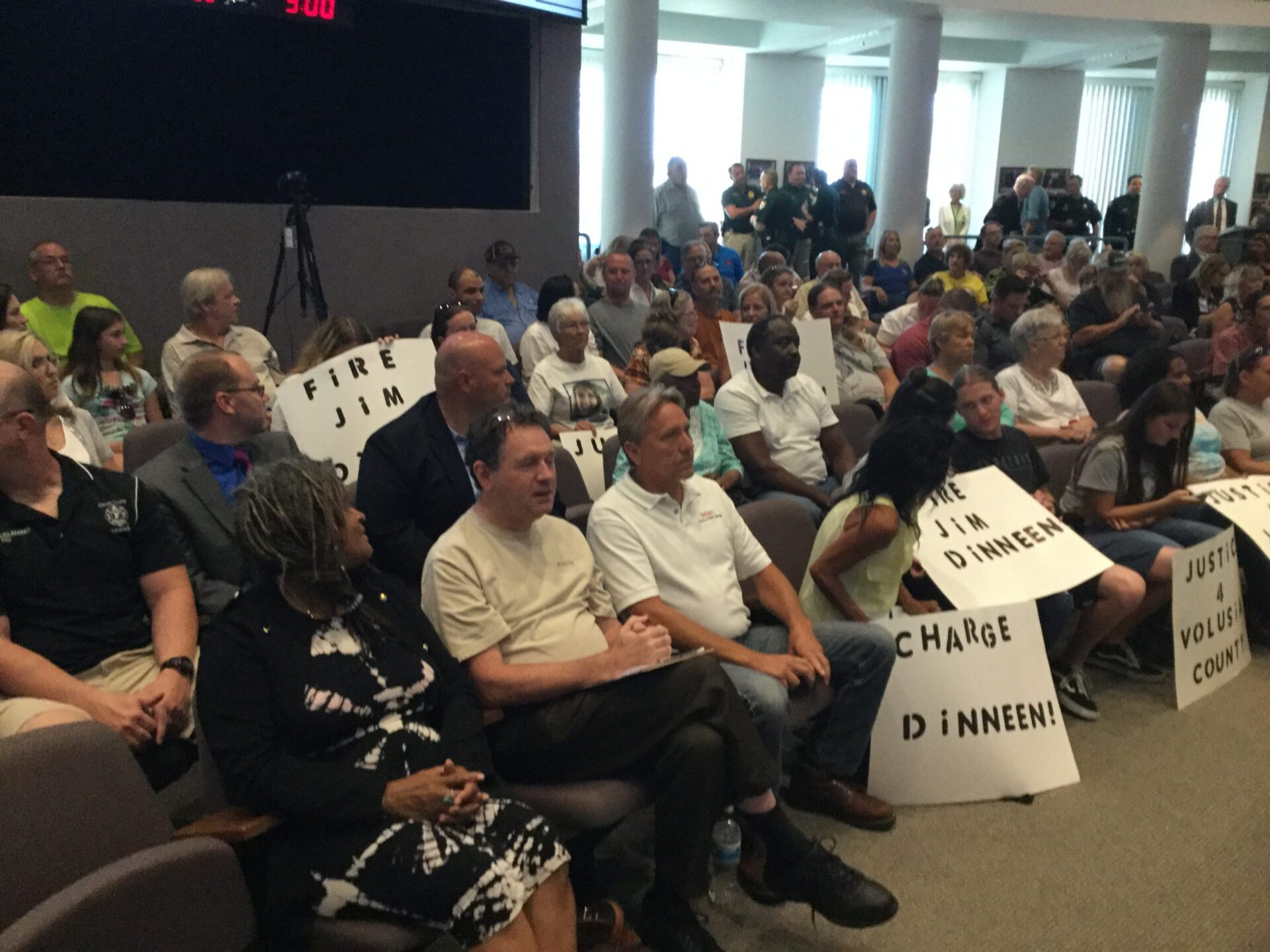 It was certain County Manager Jim Dinneen would leave, but when he would go was not clear until the County Council voted June 19.

With a standing-room-only crowd in the meeting room — some carrying signs that said “Fire Jim Dinneen” — council members decided Dinneen would leave Friday, June 22, instead of in January, as his June 13 resignation letter had outlined.

The county manager will sail out on a golden parachute. His contract gives him a year’s salary if he resigns. That’s $249,047.28 per year.

Dinneen’s contract also called for him to work a six-month transition period after quitting, but the County Council voted to waive that requirement.

They did not, however, vote to fire Dinneen, as some in the audience had hoped.

The crowd was sometimes raucous and rowdy. The cheers, jeers and smears tried the patience of County Chair Ed Kelley, who warned he would order deputies to remove the rambunctious, if they persisted.

Calls for the council to fire Dinneen had escalated in recent days, in the wake of allegations of improprieties in the Medical Examiner’s Office and understaffing in emergency services.

Brower said Dinneen should not be paid “$250,000 of our grocery money,” by allowing him to retire.

Sheriff Mike Chitwood — who has tangled with Dinneen over control of the Sheriff’s Office budget and other matters — took the floor to call for the manager’s immediate termination. He also accused Dinneen of lying about public-safety needs.

“He can’t help it; it’s in his DNA,” Chitwood said, drawing hearty applause from the audience.

Council Member Heather Post was also ready to dismiss Dinneen “with just cause,” but County Attorney Dan Eckert advised the County Council he could not find “just cause” under the manager’s contract.

The council became involved in a parliamentary quagmire, as members wrangled over a motion to allow the manager to leave June 22, and to name Deputy County Manager George Recktenwald as interim manager for 90 days. Ultimately, the motion passed on a 6-1 vote, with Post dissenting.

Some catcalls provided a soundtrack for the official proceedings.

“The next one that does that is out of here,” Kelley admonished.

After the vote, the crowd quickly thinned, but passions continued to affect the long meeting.

For his part, Dinneen expressed relief after the County Council’s action to shorten his stay.

“It’s been a wonderful experience. I love this county,” he told members of the news media who surrounded him after the vote.

Controversy over conditions in the Medical Examiner’s Office, the public feuding between Chitwood and Dinneen, and published reports about an impact-fee study the County Council was apparently not told about caused Council Member Fred Lowry to worry about the county’s ability to replace Dinneen.

“It has poisoned the well so that we won’t be able to get Barney Fife in here as county manager,” Lowry said, referring to the deputy on the old Andy Griffith Show. “It’s going to be tough to get anybody with quality.”

After hours of policy discourse on matters such as the 2018-19 budget and an ordinance allowing residents to keep more than one chicken in some residential zones in unincorporated areas, the County Council once again turned to the matter of its county manager.

“His language is not appropriate,” Mortimer told the council. “I feel a citizens committee should monitor deputies. … Professional courtesy is an issue that needs to be addressed.”

Council Member Billie Wheeler used her closing comments to sound off about the effort to push Dinneen out ahead of his previously set retirement date.

“What has happened in the last three weeks has been appalling,” she said.

Wheeler referred to “a social-media circus” and “a verbal garbage display.”

“My Dinneen, what has happened the last two weeks has been embarrassing to this county,” Wheeler concluded. “I thank you for being the mentor that you have been.”

“He is an elected official. If he has to throw everyone under the bus, shame on him,” she said. “You’ve left this county in pretty good shape, Mr. Dinneen. … I’m mighty proud to have had the opportunity to work with you.”

“Nobody’s perfect. I’m not perfect,” Council Vice Chair Deborah Denys said. She predicted the next manager will not “walk on water.”

Council Member Post, Dinneen’s critic on the council, said the county does not “want to advertise the negativity” as it launches a search for a new permanent manager.

“I am looking forward to moving ahead,” she added.

Kelley, too, decried the attacks on Dinneen in social media as “cyberbullying.”

Kelley said he and his colleagues will decide at their July 10 meeting what process will be used to search for Dinneen’s permanent successor, including perhaps hiring “a professional headhunter.”

Recktenwald, according to Kelley, does not wish to apply for the permanent post.