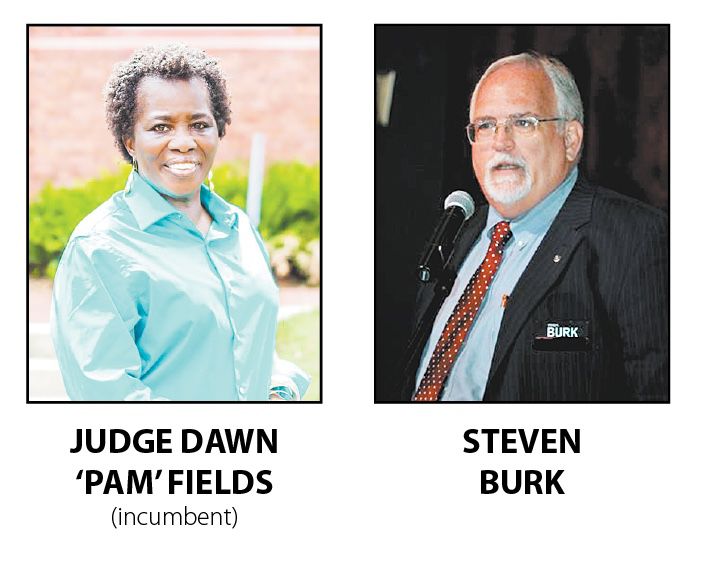 While four Volusia County judges were scheduled for retention votes this year, only one — Judge Dawn “Pam” Fields — drew opposition.

Voters will determine Aug. 28 whether Fields or her challenger, Steven R. Burk, will take the bench for the next six years.

Fields has been a county judge for a dozen years, first winning the seat in 2006 and re-elected without opposition in 2012.

Before that, Fields was an assistant state attorney.

In 2012, Burk lost to Christopher Kelly in a five-way race, winning just 16.7 percent of the vote.

In addition to a 35-year career as an attorney handling a variety of cases, Burk is a past-president of the DeLand Rotary and volunteers in DeLand-area elementary schools.

According to the Volusia County Supervisor of Elections website, as of the most recent campaign financial reporting deadline of July 20, Fields has gotten $40,170 in financial donations and $135 in in-kind contributions, while spending a total of $18,696.60.

Her cash contributions included $20,800 from attorneys or law firms, and a $125 in-kind donation from an attorney.

None of his contributions were from the legal field.

One twist in this race is that Burk is being sued by several related law firms, which have accused him of defamation for a comment he made regarding law firms’ campaign contributions to Fields.

Attorney Kimberly Simoes, along with the law firms of Simoes Davila, PLLC; Simoes Law Group, P.A.; and Simoes Davila & Partners, PLLC, filed suit April 23, claiming in part that Burk made “false and defamatory statements” about their campaign contributions being made “in order to curry decisions in their favor.”

Simoes and one of the firms gave Fields a total of $2,000 early in her campaign, according to financial reports filed with the Supervisor of Elections.

Burk told The Beacon in May he has concerns about campaign contributions made to Fields.

Burk wasn’t accusing Fields of doing anything illegal, but he thought it looked improper for a law firm with a large number of cases before her to make such contributions, especially, Burk said, because those cases sometimes involve the court awarding thousands of dollars in legal fees to the law firms in cases where the claims are for less than $100.

“There is nothing that’s been done illegally — nothing that I know of yet,” Burk told The Beacon. “It just looks bad.”

The Simoes firms also contributed to the campaigns of Judges Kelly and Feigenbaum, as well as to candidates in other races.

A hearing in the case is scheduled for Aug. 15 — less than two weeks before voters go to the polls to decide between Fields and Burk.

Biographical information on the website for Burk’s law firm states Burk was born and raised in the Midwest, graduated from the University of Iowa in 1976, and attended law school at the University of Baltimore while clerking at the Public Defender’s Office.

Burk took a job with a private law firm in Fort Lauderdale in 1983, then opened his own office two years later. He moved his practice to DeLand 13 years ago and has amassed 35 years’ experience as a trial attorney, in both felony and misdemeanor courts, on a wide range of cases from small claims court to first-degree murder.

Burk believes that now, more than ever, public officials need to be aware of even the appearance of undue influence. He criticizes Fields for accepting campaign donations from attorneys and law firms that have cases before her, and he is determined to end that practice.

Burk is also a former teacher, in his case teaching English at high schools in Iowa and Baltimore after graduating from college. At various points in his life, he also has been an ironworker, truck driver, heavy-equipment operator, Cub Scout leader, and volunteer mentor.

At 64 years of age, Burk is a father and grandfather who doesn’t claim to be perfect. His life experiences, he said, include a serious accident that left him hospitalized and wheelchair-bound for extended periods, as well as struggling to support his family.

“The older I get, the more I realize we all go through struggles, heartbreak, challenges, battles and victories, and we all have more in common than we have differences,” Burk told The Beacon.

“I would like to offer my experience, knowledge of the law, and the ability and willingness to make the hard call in service to the people as a Volusia County Court Judge,” he wrote, in part, in a statement on the Department of Elections website.

The 60-year-old Fields is a graduate of Father Lopez High School.

She is a former prosecutor in Volusia County, with 13 years of trial experience, and earned supervisory and management experience while leading a staff of 18.

Outside of court, Fields said, she is a frequent lecturer, volunteer and motivational speaker at several Volusia County schools.

No surprise, given that she is a former math teacher in Volusia County high schools, with eight years of classroom experience.

Fields points to an incident that happened to her almost 30 years ago with heightening her awareness about what things “look like.”

In 1989, she said, she was stopped in a store and asked to leave and not return because of what it “looked like” she was doing.

The store didn’t accuse her of doing anything illegal, improper or immoral, she said; employees just asked her to leave.

That incident, coupled with her opponent’s comments about what her campaign contributions “look like,” makes her determined to make judicial decisions based on research, common sense, experience, acceptable standards and the law, she said, not how things appear at first blush.

“Choosing the right candidate for judge is a vital task for the voters of Volusia County,” Fields says on her campaign website. “My exceptional qualifications are the reasons I remain the most suitable candidate for this seat, therefore, I humbly ask for your vote on August 28th, 2018.”