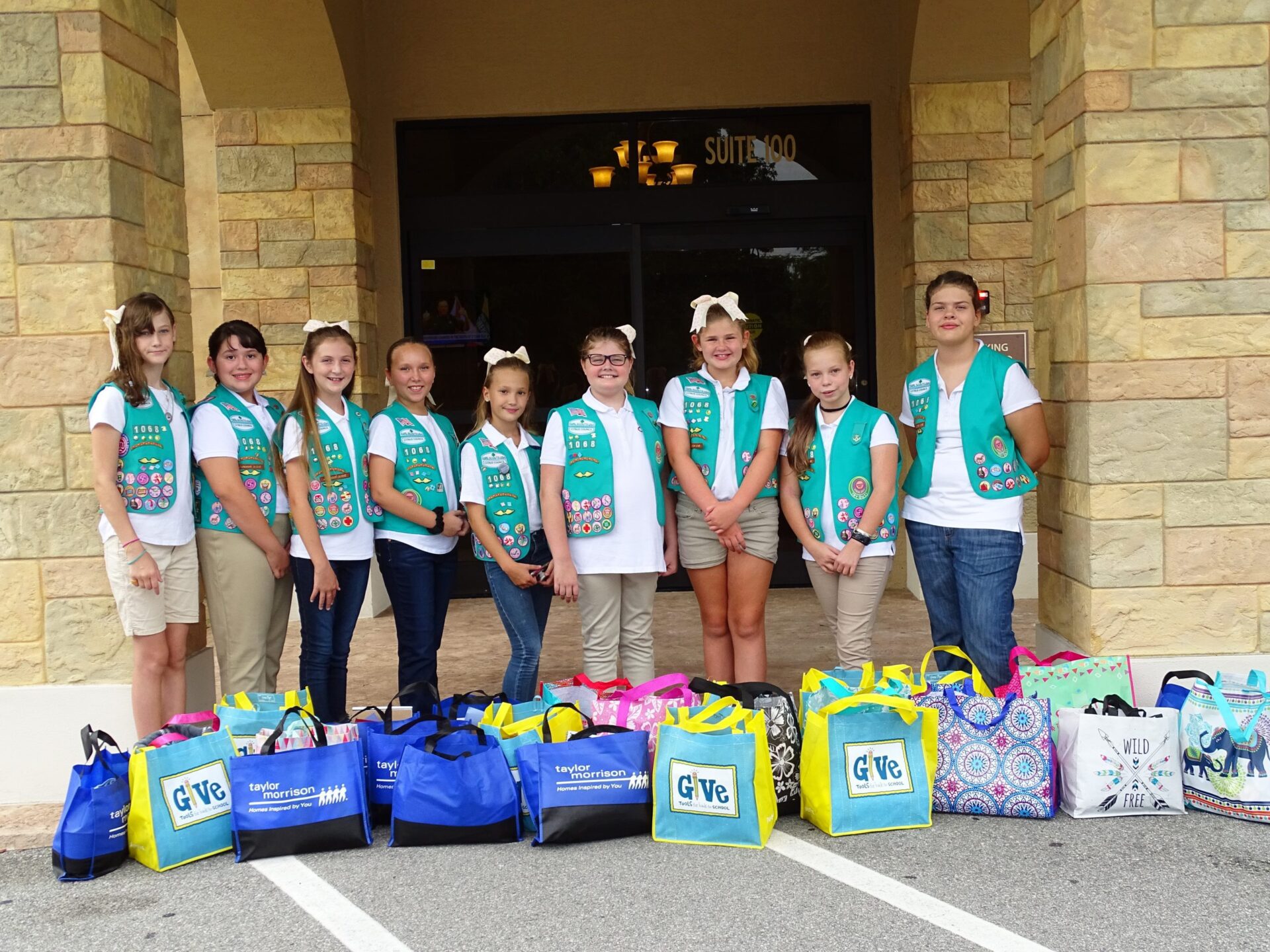 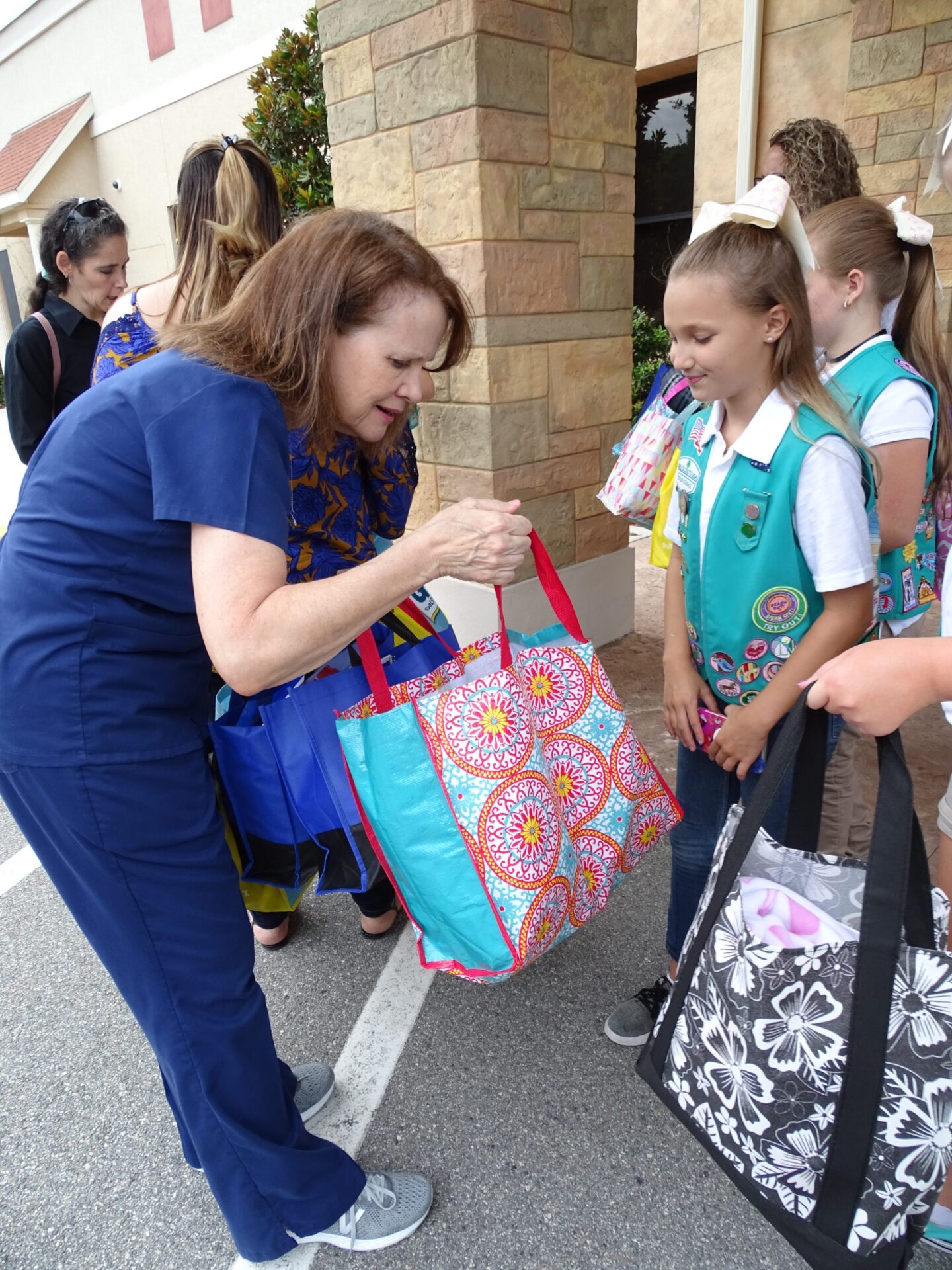 A Scout troop’s hard work over the summer paid off in bags of comfort for cancer patients undergoing treatment in Orange City recently.

Early last week, Troop 1068 finished a project that will earn members their Bronze Service Award — the highest honor a Girl Scout Junior can achieve, according to the organization’s website — and provided comfort to 25 people battling cancer.

The do-gooders descended on Mid-Florida Hematology and Oncology Center on Enterprise Road in Orange City late in the afternoon Aug. 3, toting bags of supplies and heartfelt wishes.

“These girls chose a project that hit close to home,” said Susan Gahring of Orange City, who said tears flowed from every direction at the cancer treatment facility as the Scouts delivered the gifts.

Her granddaughter, Ashlynn Robinson, 11, is a hardworking member of the troop who strives annually to exceed her previous record in cookie sales. This year, she sold a whopping $5,585 worth of cookies.

“One troop member’s grandma was diagnosed with breast cancer and went through treatment,” Gahring said. “Some of the troop’s family members [have been diagnosed], as well, so it was a no-brainer. They wanted to do this project.”

Gahring said the girls worked through the summer to collect donations to pay for tote bags and useful products to fill them.

“They did an awesome job to bring a little bit of joy to those going through chemo treatments, and hopefully to take their minds off of what they are going through while sitting through hours of chemo,” she said. “I could not be any prouder of this group of girls.”

Because the intent of these awards — bronze, silver, gold — is to foster certain life skills, the young participants had to navigate a number of steps to reach the goal.

The six steps are: building a Girl Scout Junior team; exploring the community; choosing a Bronze Award project; making a plan; setting the plan in motion and spreading the word.

In a phone interview the day before the girls distributed the brimming bags, Ashlynn explained the process. In the beginning, she said, it was a challenge to decide which project to do, because the group members had a lot of good ideas.

“But a lot of people have been hit by cancer, so we decided to do this,” Ashlynn said.

One of those people is a troop member’s grandmother, who gave the girls ideas for tote fillers: throw blankets for warmth; adult coloring and puzzle books; notebooks; colored pencils and pens for pleasant distraction; and handmade get-well cards for encouragement.

“Our group was the whole troop,” Ashlynn said. “We actually called people, friends, and called stores for donations. We paid for the blankets and other items with the money they donated.”

Through the process, the young girls gained an understanding of what people undergoing cancer treatment endure. They met that understanding head-on, and provided things to ease the challenges their recipients face.

“They always have to wait in the lobby or [exam] room,” Ashlynn said. “So, if they’re cold, the blankets will warm them. We got them word-search books, drawing stuff and sudoku to give them something to do and relax them, so there’s nothing to worry about.”

Also included were some wise words.

“We wrote them letters saying ‘You can do this; you’re strong,’” Ashlynn said. “I think all the girls will say everybody’s strong, and they can do it.”

Though she and the troop members have not personally experienced cancer and chemotherapy, they were able to feel empathy for those battling the disease.

“It’s like there’s pain in it, and everybody gets pain,” Ashlynn said.

By learning about the treatment process, side effects and feelings from the grandmother who’s going through it, the girls were able to discuss and agree on how to navigate the project steps, and wound up looking forward more to the outcome for others than to the Bronze Medal for themselves.

After leaving the bags with a Mid-Florida Hematology and Oncology staff member, the project was complete.

“I actually did have a little [bit of] tears,” Ashlynn said. “It was happy tears, because it was good for the people.”