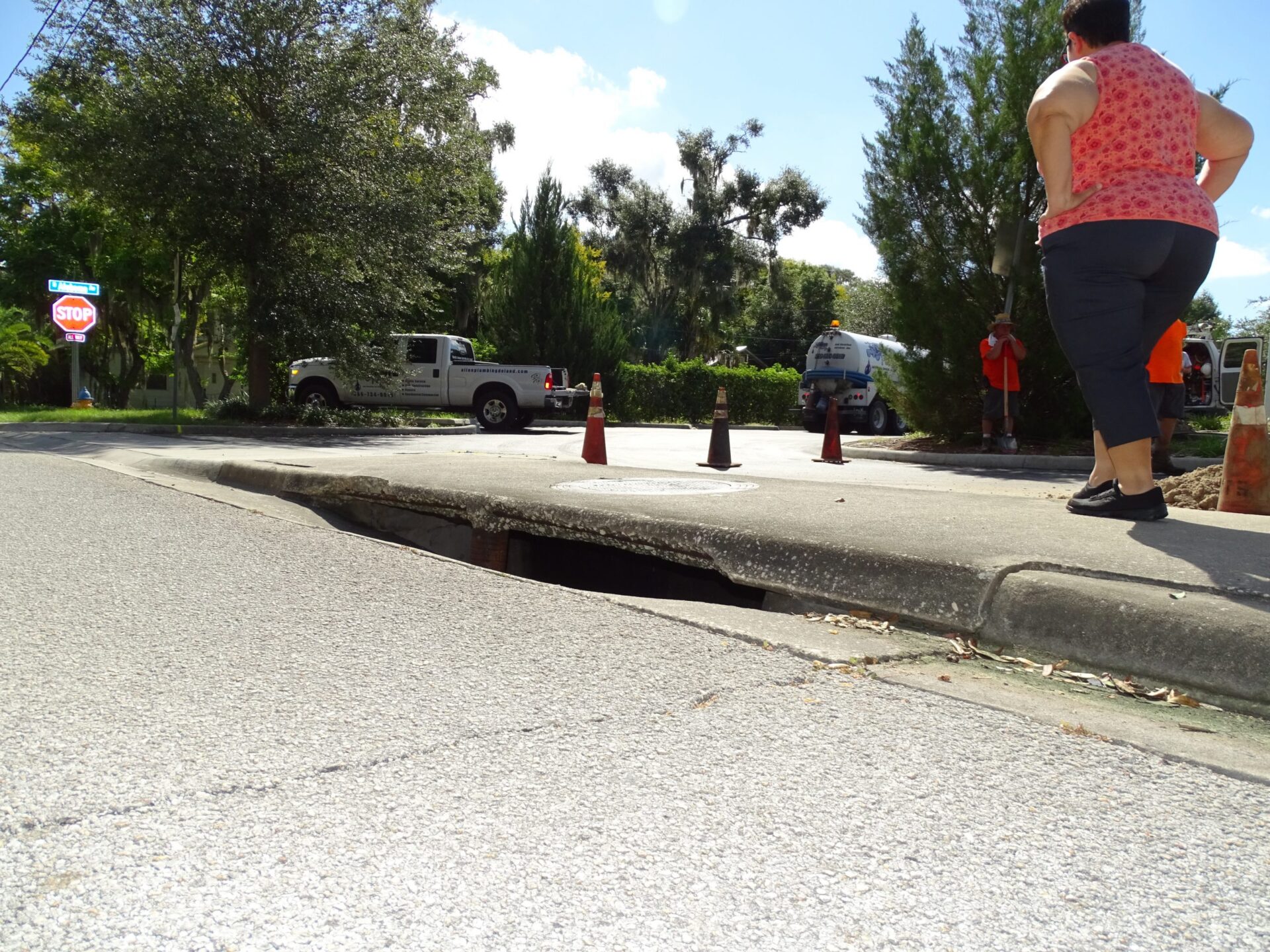 A clogged pipe in a DeLand business plaza has been spewing sewage onto nearby Woodmont Road for at least a week, according to neighborhood residents and employees at Moe’s Southwest Grill.

The plaza at the northeast corner of Woodland Boulevard and Plymouth Avenue is home to Moe’s Southwest Grill, as well as a Save-a-Lot grocery, Big Lots, a CVS pharmacy and DeLand Natural Market.

When The Beacon visited Sept. 26, the sewage spill was being controlled by pumping into a tanker truck. Residents said the sewage had at times flowed down Alabama Avenue behind the stores.

The general manager of Moe’s, Jason Moore, said he has been aware of the problem, but repairs have been delayed by negotiations about who would pay.

“The landlord of the plaza says it’s in the Moe’s contract,” Moore said, “but we’re not too sure about that.”

If it’s not fixed soon, Moe’s could lose its water service, according to City of DeLand Public Services Director Keith Riger.

Riger said Moe’s uses a private sewage station on the property. He said the problem originates in a clogged force-main pipe that runs from the Moe’s pump station eastward through the parking lot and past Save-a-Lot, to the city’s sewer line on Alabama Avenue.

Force-main is terminology for a pipe that requires a force other than gravity to flow, such as a pump station.

“At first, we didn’t know what it was flowing down the street; we just knew it stank to high heaven,” nearby resident Jo Ann Nahirny said, “and when it rained, it washed it all away. But the past week, it didn’t rain much at all.”

Nahirny said the problem continued for more than a week. She complained to the city Sept. 21, she said.

“I mean, kids walk this way from George Marks [Elementary School], and there’s sewage on the ground,” Nahirny said.

By Sept. 24, city officials were involved and Moe’s was pumping the sewage into waste trucks while a plumbing company was preparing to dig up parts of the lot.

“We’re trying to let them stay in business until they can get the force main fixed,” said Riger, who was at the site Sept. 25.

However, the city won’t tolerate raw sewage flowing on the ground.

“If it happens again, we’re shutting the water off to Moe’s,” Riger said.

In the meantime, he advised anyone in the area to stay out of any liquid on the ground.

Moe’s manager Moore identified Thomas R. Andrews of Ponte Vedra Beach as the landlord. At press time, Andrews had not responded to a message left on his telephone by The Beacon.