Volusia County residents casting votes in the Tuesday, Nov. 6, election might be surprised to learn that their paper ballots won’t be counted.

Volusia County’s electronic-voting system doesn’t tabulate your vote directly from the ballot you feed into the reader at the polling place. Instead, much like an ATM reads a check, the vote-tabulator takes a picture of the ballot, and counts your vote from the digital image.

In a system that, by design, has backups every step of the way, creating an image of each ballot generates a backup.

At least it would, if the 63 counties in Florida that use electronic vote-tabulation had hit the “save” option.

Volusia County just began saving all of its ballot images, beginning with the August primary.

“Our opinion is that the ballot image is part of the chain of custody of the vote,” said Susan Pynchon, director of the nonprofit Florida Fair Elections Coalition.

She urged Volusia County Supervisor of Elections Lisa Lewis to begin saving the images, to enhance the ability to audit elections.

“It probably wasn’t truly thought of before,” Lewis said.

Lewis said under the original setup of the system, only images of write-in ballots were saved.

“The picture is the source document,” Pynchon said. “But it appears that many, if not most, of the Florida counties that use this software are deleting the images.”

Pynchon has sent public-records requests for the ballot images to the counties that use same or similar software, in an attempt to encourage more elections supervisors to hit that “save” button.

“It’s an amazing auditing tool,” Pynchon said. “I’m more excited about this than almost anything.”

Because the machines create corresponding random serial numbers on the digital image and on the paper ballot, Pynchon said, they can be compared side-by-side.

There are other benefits.

According to Lewis, before the images were saved, when a public-records request was made for ballots, an elections official had to pull the actual paper ballots and stay with the requester while the ballots were examined.

Now, PDF images of the ballots can be burned to a CD or sent by email. The elections office in Madison, Wisconsin, is even posting the ballot images on the internet, Pynchon said.

“We’re hoping all of them will be doing it,” she said.

Also, in the case of a catastrophic event — a hurricane, for example — the digital ballots would be safe.

“If there was a fire or flooding, the paper ballots could possibly be gone,” Lewis said. “I think it’s a good backup.”

Will voting someday be entirely computerized?

Write-ins challenge both humans and the robot overlord vote-tabulators.

On some races, voters find a bubble on the left on the ballot, with a blank where a candidate’s name can be written.

There are write-in blanks this year, for example, in the races for U.S. senator, governor and chief financial officer.

Two important rules, though: Handwritten votes count only if the name you write is the name of a qualified write-in candidate. Also, be sure to fill in the write-in bubble.

The seven votes for ever-popular Mickey Mouse in the 2018 primary for Volusia County council member at-large were always doomed to fail.

Likewise, the 100-plus voters who filled in the oval for a write-in vote but didn’t write in a name had little effect.

Ben Franklin and Evel Knievel never had a chance in that primary, not least because they are dead.

“Republican” and “At Large” would be odd names for actual humans.

There was a legitimate write-in candidate in the County Council at-large primary, who registered as a candidate before the election: John Casaburro.

A total of 143 voters — among the 104,604 who cast ballots in the at-large race, including 616 write-ins — managed to write in Casaburro’s name and spell it close enough to correctly for their votes to count.

“The most I’ve ever seen for a write-in candidate in Volusia,” Lewis said.

But Lewis has seen plenty of write-in voting creativity.

For example, the dozen or so votes in the at-large race went to Volusia County Sheriff Michael Chitwood, an actual live human in the county, who is not actually a candidate for County Council at-large.

Spelling counts, and the Canvassing Board decides how close voters have to be.

Those would be unlikely to be misspelled, considering the name is printed just a line or two above.

But write-ins like these must be manually checked by elections officials who are likely to have better things to do.

So if you write in a candidate, try to get it right. A vote is still a vote, even if it is for Peter Rabbit. The difference is whether your vote will have a real effect.

On the other side of this are real people and real consequences. Write-ins, along with over-votes (marking more than one candidate in a race) and under-votes (not marking anyone at all), accounted for some 7,882 votes in the County Council at-large race.

Anybody who lived in Volusia County during the 2000 presidential election should know the difference thousands of votes can make. 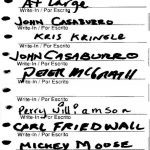