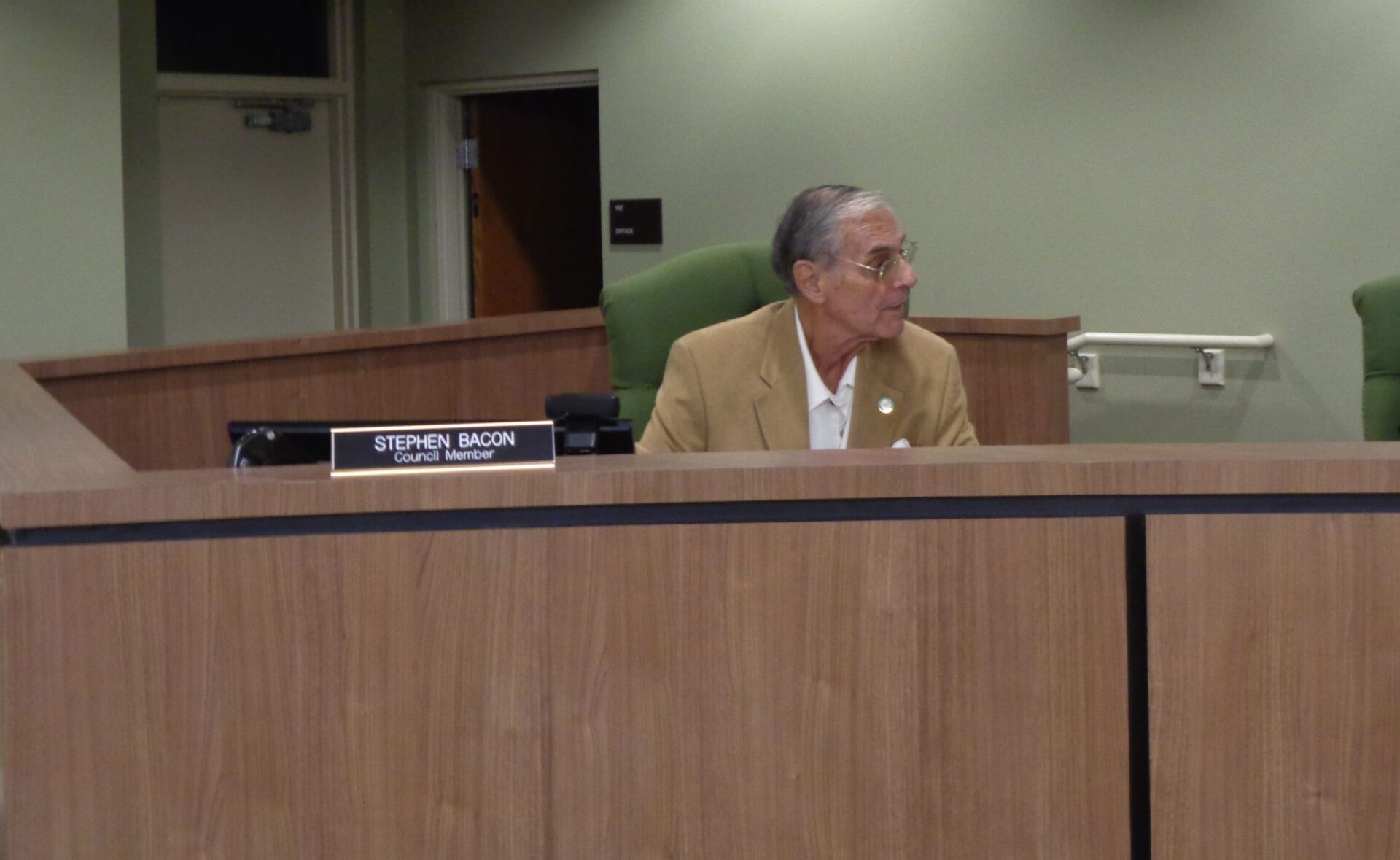 Bacon, according to city documents, improperly engaged with DeBary employees, chatting with one female employee about how women in Saudi Arabia become sex slaves, and asking another employee to fix his personal computer.

“The City of DeBary needs to be an employer where employees feel safe,” Mayor Karen Chasez said at the City Council’s Jan. 9 meeting, adding “Council Member Bacon’s interactions were inappropriate.”

With a unanimous vote, the council adopted a resolution finding Bacon had been involved in several incidents that prompted city employees “to complain or raise concerns with the city manager.”

Chasez added, “That action could be something as severe as removal from office.”

Chasez is the city’s first female mayor. Four of five members on the City Council are women; Bacon is the only man.

How did it begin?

The story began almost two years ago. Bacon, according to city records, went to Finance Director Elizabeth Bauer’s office in CIty Hall on Feb. 27, 2017, and talked about a recent audit.

According to Bauer’s written statement about the encounter: “Then he proceeded to tell me the Koran says that in Saudi Arabia, if you are a married woman walking down the street with your children and you get kidnapped — you become the property of the person that kidnapped you — even if you are married. Then the kidnapper makes you their sex slave. Then he asked what I thought about that. I didn’t answer. Then he asked me again. I said I don’t talk about religion. He said he was not talking about religion. I said well you started this by asking if I follow the Koran.”

After a few days had passed, Bauer raised the matter again with McLemore.

“I would like Ron and/or the City Attorney to talk to Mr. Bacon asap so I don’t have to worry everyday that he may come to my office or anywhere else and talk to me in a sexually harrassing [sic] way again,” she wrote, in a follow-up statement.

Weeks later, Bacon met with Ardaman to discuss his conversation with Bauer.

“Council Member Stephen Bacon acknowledges the substance of and apologizes for his conversation with Liz Bauer that occurred on February 27, 2017,” Ardaman wrote.

Ardaman further noted, “Council Member Bacon understands that he should not have made the statements he made to Ms. Bauer and will not make such statements to either her or others in the future.”

DeBary Information Technology Director and Records Manager Eric Frankton provided a summary of a visit at City Hall, during which Bacon asked Frankton to work on Bacon’s personal computer.

“Mr. Bacon went into my office and put his personal computer on my desk. I stood in the doorway and would not enter my office. I attempted to explain that it was starting to blur the line between what is acceptable and not,” Frankton wrote about the Sept. 24, 2018, incident.

“I explained that he was asking me to fix his personal computer to do City business while I’m ‘on the clock’ and being paid with tax dollars. Mr. Bacon became agitated and kept asking me to look at it saying it would only take a few minutes. … He accused me of wasting his time by coming down to City Hall and me not looking at it,” Frankton wrote.

Under DeBary’s charter, individual council members may not order or direct administrative staffers to do anything. The City Council, instead, hires a city manager who is in charge of directing city employees.

In 2016, the City Council concluded that then-Mayor Clint Johnson had violated the charter by ordering Frankton and former City Manager Dan Parrott to do particular tasks. The City Council expelled Johnson from office in 2016.

Despite admonitions to avoid contact with Bauer, Bacon approached her during a break in the Nov. 7 City Council meeting, Bauer reported.

“Mr. Bacon came over to the staff table and stood over me in my personal space and began berating me in an aggressive manner about how I do my job,” Bauer wrote in a memo to McLemore.

“The situation made me very uncomfortable. Mr. Bacon has been told by the attorney and by you several times not to communicate with me directly because of what he did to me in February 2017 but he is not abiding by that agreement,” she later wrote

When the resolution dealing with his “interaction with city staff” came up for action, Bacon was silent. The resolution reminds Bacon not to give specific orders to city staffers or to ask any city employee to work on his personal equipment; to offer his ideas about improving city government to the city manager only; and to “not initiate any one-on-one communication or in interaction with Ms. Elizabeth Bauer.”