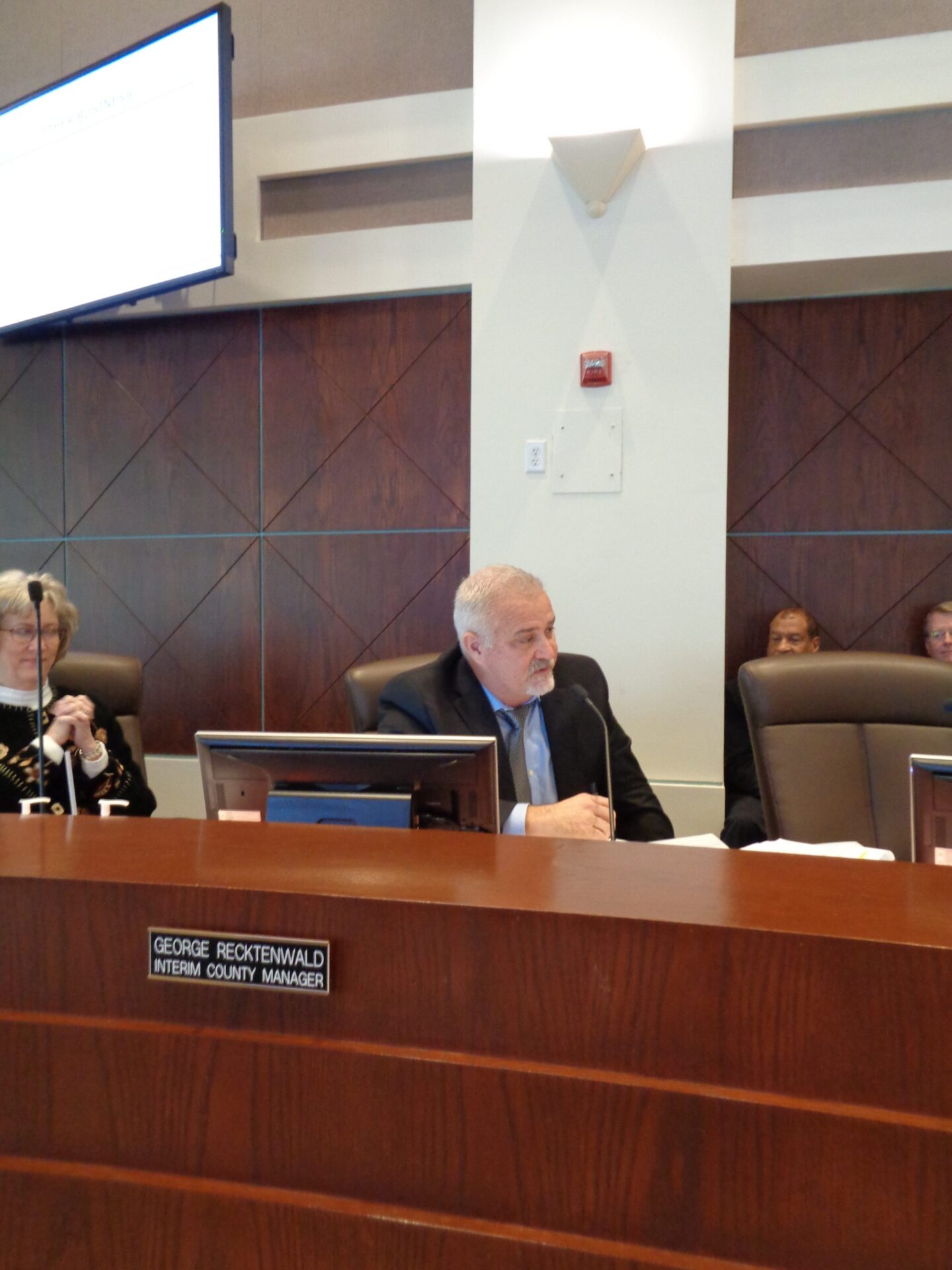 “I’ve been thinking about when we’re going to get rid of the ‘interim,’” County Chair Ed Kelley told his colleagues at the Jan. 22 meeting.

Kelley was ready to act. He passed the gavel to Vice Chair Fred Lowry and moved “to offer that position to George Recktenwald.”

Recktenwald, formerly deputy county manager, has served as the county’s top administrator since the abrupt departure of Jim Dinneen in June. Dinneen had been manager for 12 years.

Kelley said he had talked with Recktenwald and convinced him to accept the appointment, if the rest of the council would agree.

The rest of the governing body was ready, willing and eager to back Recktenwald.

“George has worked in almost every part of this county, and he does well,” At-Large Council Member Ben Johnson said. “This man has worked hard and proven himself. … I think he has the trust [of others], and give him the chance to be our next county manager.”

The other freshman member of the County Council, Barb Girtman, said she had some “concerns,” which she did not specify, but expressed “confidence with moving forward with George Recktenwald.”

She addressed Recktenwald: “I am certainly open to giving you that opportunity. Your heart and intensity is in the right place.”

“I have heard nothing but good reports,” Council Member Billie Wheeler said, referring to conversations she has had with the leaders of cities in the county. “He knows what he’s doing. … I think we need to move forward on signing a contract with George Recktenwald.”

Now, a contract must be negotiated.

One of the points will be salary. As interim county manager, Recktenwald has been making $182,687 a year. In his final year as county manager, Dinneen’s salary was $249,046.

With a 7-0 vote, the County Council directed Kelley and County Attorney Dan Eckert to negotiate with Recktenwald on a contract.

The new manager was both grateful and humble.

“I just want to thank the council for having that kind of faith and confidence in me,” he said.

Recktenwald, 55, described county government as “a team sport,” noting there are other employees on whom he relies.

He has worked for Volusia County for 22 years. He joined the Public Works Department as a supervisor in 1997 and worked his way up the career ladder, serving as director of the Road and Bridge and Public Protection departments, before becoming deputy county manager.

Recktenwald has a bachelor’s degree in industrial technology from the State University of New York. Before coming to work for the county, he taught physics at New Smyrna Beach High School and worked as an engineering technician for the Florida Department of Transportation. He lives in DeLand.

When he was first named to fill the vacancy created by Dinneen’s exit, Recktenwald disavowed any interest in taking the job permanently.

The County Council hired an executive-search firm, Slavin Management Consultants, of Norcross, Georgia, to find and screen prospects. Now, that search has ended, but Community Information Director Joanne Magley said Slavin will seek applicants for other high-echelon appointments, such as department directors.