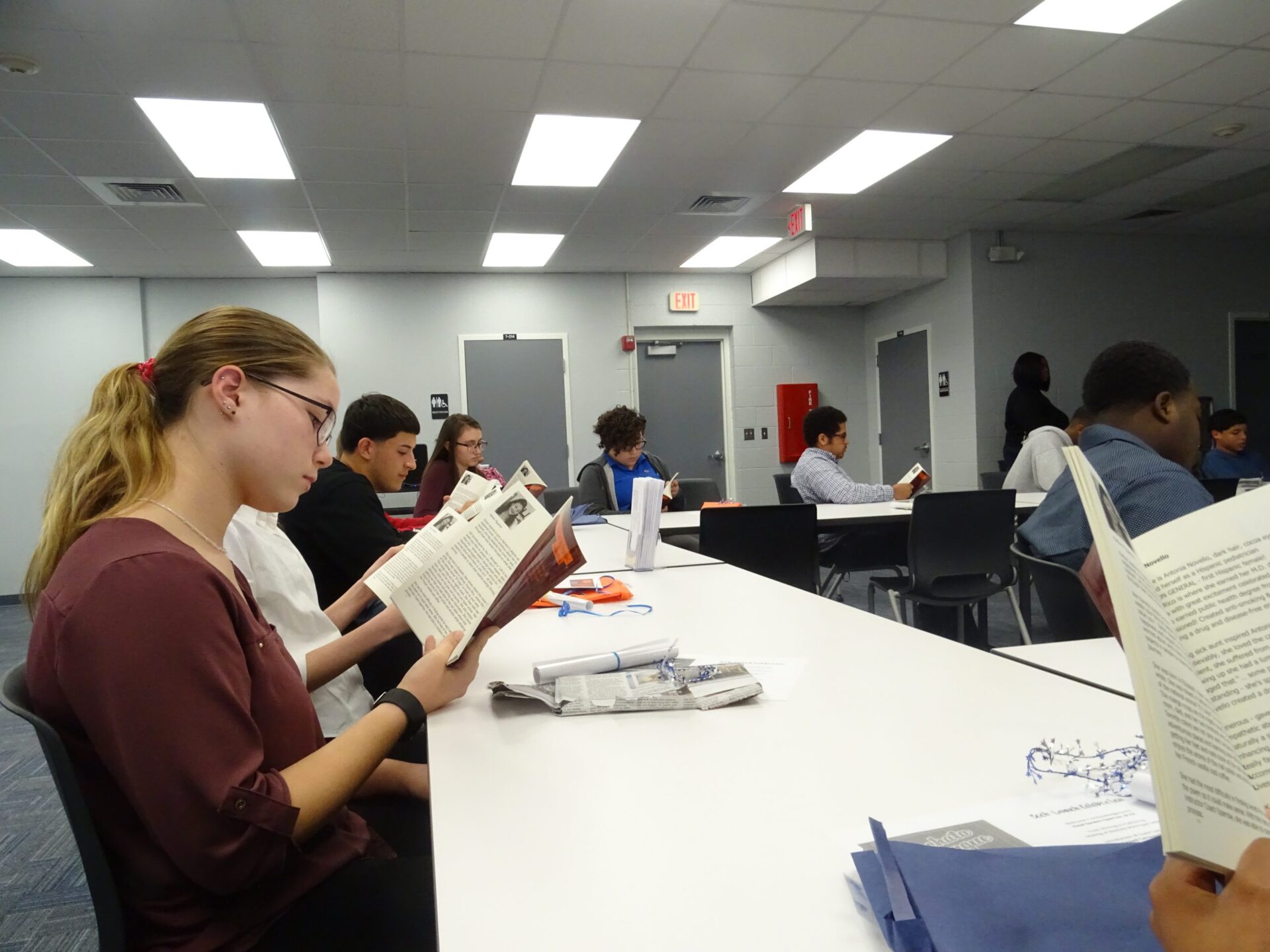 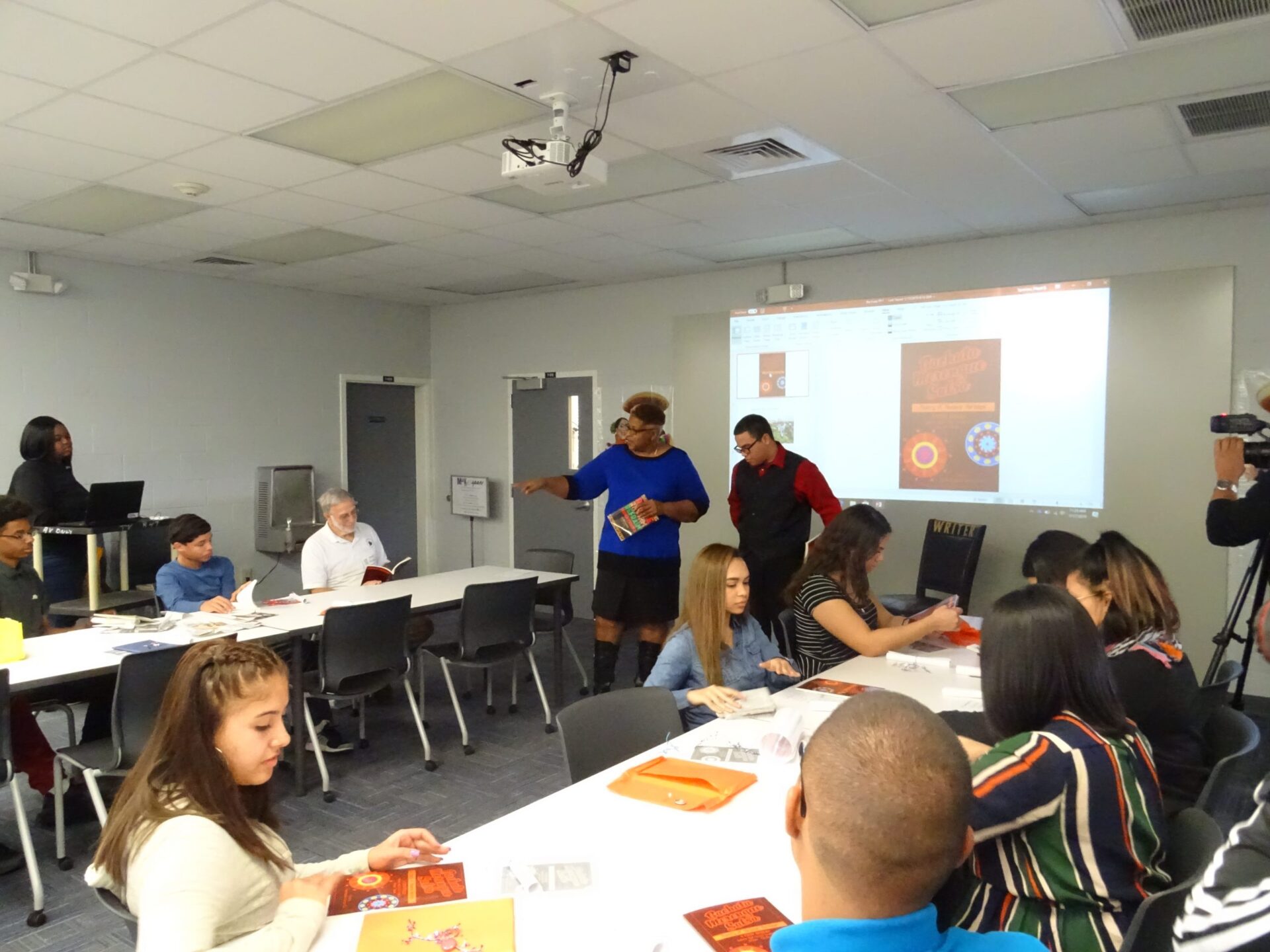 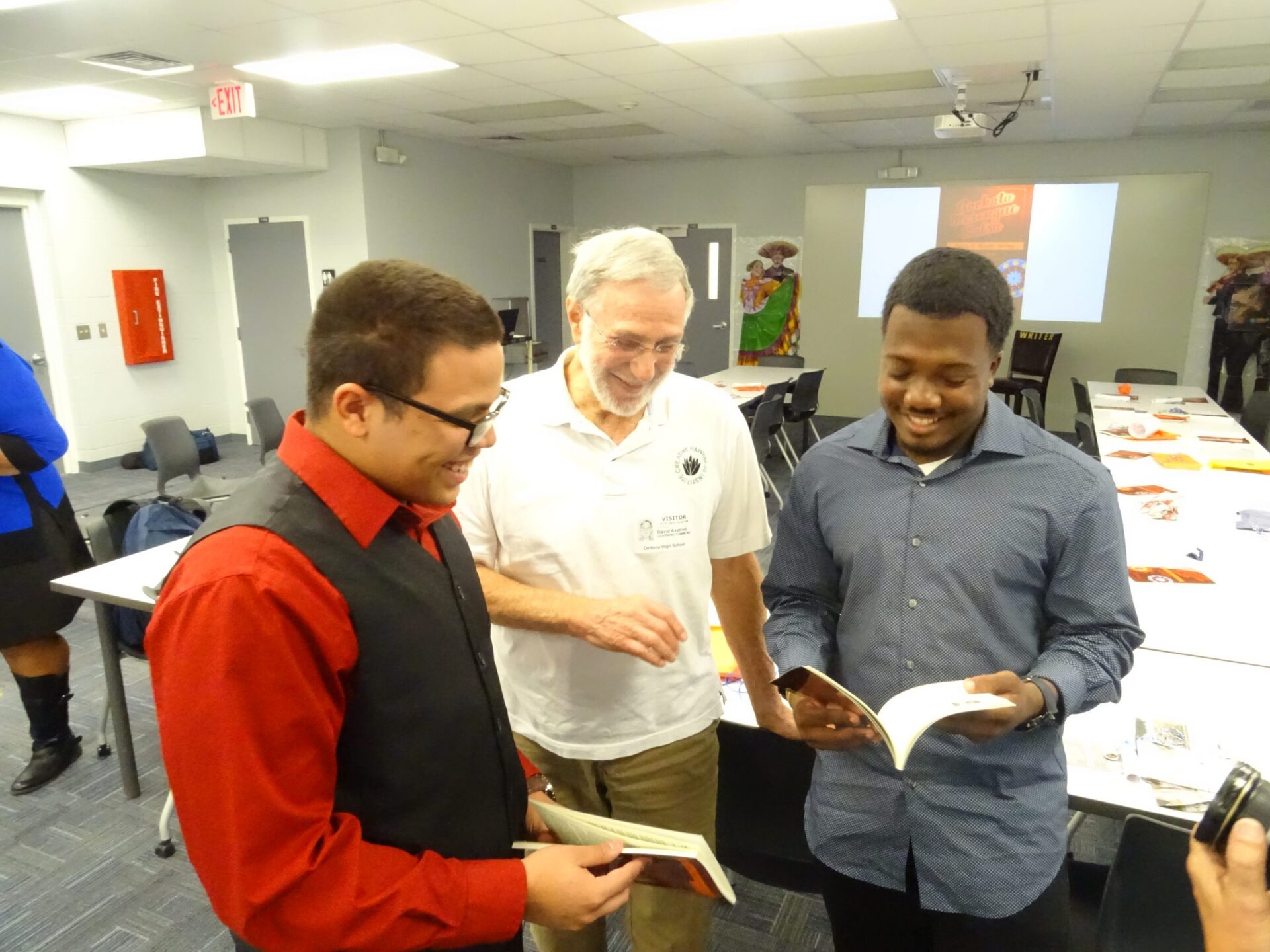 From migrant workers to major-league sports stars, a new book of poetry written by an intensive reading class at Deltona High School pays tribute to all aspects of Hispanic culture.

Bachata, Merengue, Salsa: Poetry of Hispanic Heritage is a compendium of 32 poems from 11th-grade students in a class taught by Hazel Sparrow.

The book, which features both free-verse and acrostic-style poems, is the second published by one of Sparrow’s classes. Last year, Sparrow’s intensive reading class published Rhyme Rhythm Refrain: Poetry of Black History.

As a medium where a large amount of information can be expressed in short passages, Sparrow said poetry provided the ideal form to get “reluctant readers,” like the students in her class, to open up and be creative.

“We have students here who stayed the course, who had a challenging assignment, and they stepped up to the plate, and they did it,” Sparrow said.

Sparrow and her class held a launch party for the new book at the school Jan. 17.

In addition to just writing the poems themselves, she explained, the assignment required the students to research various topics, do multiple drafts of their work, and to help their peers evaluate and improve their writings.

“If they are struggling readers, they need to know the other end of the spectrum,” Sparrow explained. “Everything you read, somebody wrote. So now, they can become writers, to have somebody read their stuff.”

Volusia County Poet Laureate Dr. David B. Axelrod attended the book launch party, to hear the students recite their poetry and to give his feedback and advice to the young poets.

Axelrod is director of the Creative Happiness Institute and its Young Poets Mentoring Program. He praised the students for not only writing poetry, but informative poetry.

“Having a passion and wanting to say something is the most important thing … the steps you’ve gone beyond are, first, to really base what you want to do on knowledge, on fact,” he said. “Not just [on] a gut reaction, but something that will have the precision and the importance to command the respect of not just your family, but the people around you.”

Giving the students a chance to say something important to them can also help coax so-called “reluctant readers” into reading and writing.

“It’s not like you have to go to an honor class to find people who really have something important to say. Why would you want to read, if it wasn’t important to you?” Axelrod said. “The reason a lot of these kids are ‘reluctant’ is twofold: sometimes it’s [that they speak English as] second-language … but the good part about this is, it doesn’t label kids as not able to learn. It tells them, ‘Here’s a good reason why you want to learn more,’ and they respond to that.”

The project was made possible by a grant from FUTURES Foundation for Volusia County Schools, a nonprofit that supports public schools. Sparrow printed the book through Lulu.com, an online self-publishing platform.

In addition to the copies printed for the students, 25 copies of the book have been sent to the Deltona Middle, Heritage Middle, and Galaxy Middle School libraries.

“Generally, when you write something for a teacher, they grade it, and it goes into a file cabinet, never to see the light of day again,” Sparrow said. “What I try to do is give my kids opportunities to have a real audience.”

That aspect gave the assignment special meaning for students like Ameilia Chucci, who wrote a poem about longtime Yankees third baseman Alex Rodriguez.

“I felt like it was really inspiring to make us create and to write something that we get to publish,” she said.

Another student featured in the book is Miguel Mendez, who actually took Sparrow’s class last year, and is now a senior at Deltona High School. He had one poem published in last year’s book of poetry, Rhyme Rhythm Refrain: Poetry of Black History, but Mendez admits he didn’t exactly give the class his all.

“I was in her class last year as a junior, and I had her first period, which is not the best. I spent most of my time in her class just sleeping,” he said. “It was kind of hard to get it done, because I wasn’t very motivated.”

The class did, however, awaken Mendez to a love of poetry. Now, Mendez said he writes his own poetry in his free time. When he learned Sparrow was publishing another book of poems, he asked if he could contribute.

“It’s a different way to express myself. I’ve always depended on music to express myself … so, when I started writing poetry, when we did the class, she explained that the music we listened to is just like poetry,” he said. “I sat down and started thinking and, ‘Well, yeah, it is.’”

In the end, he wrote three poems for this year’s book.

Bachata, Merengue, Salsa: Poetry of Hispanic Heritage is available in paperback from Lulu.com, for $8.95. Visit https://bit.ly/2Dwtwsb to order a copy.