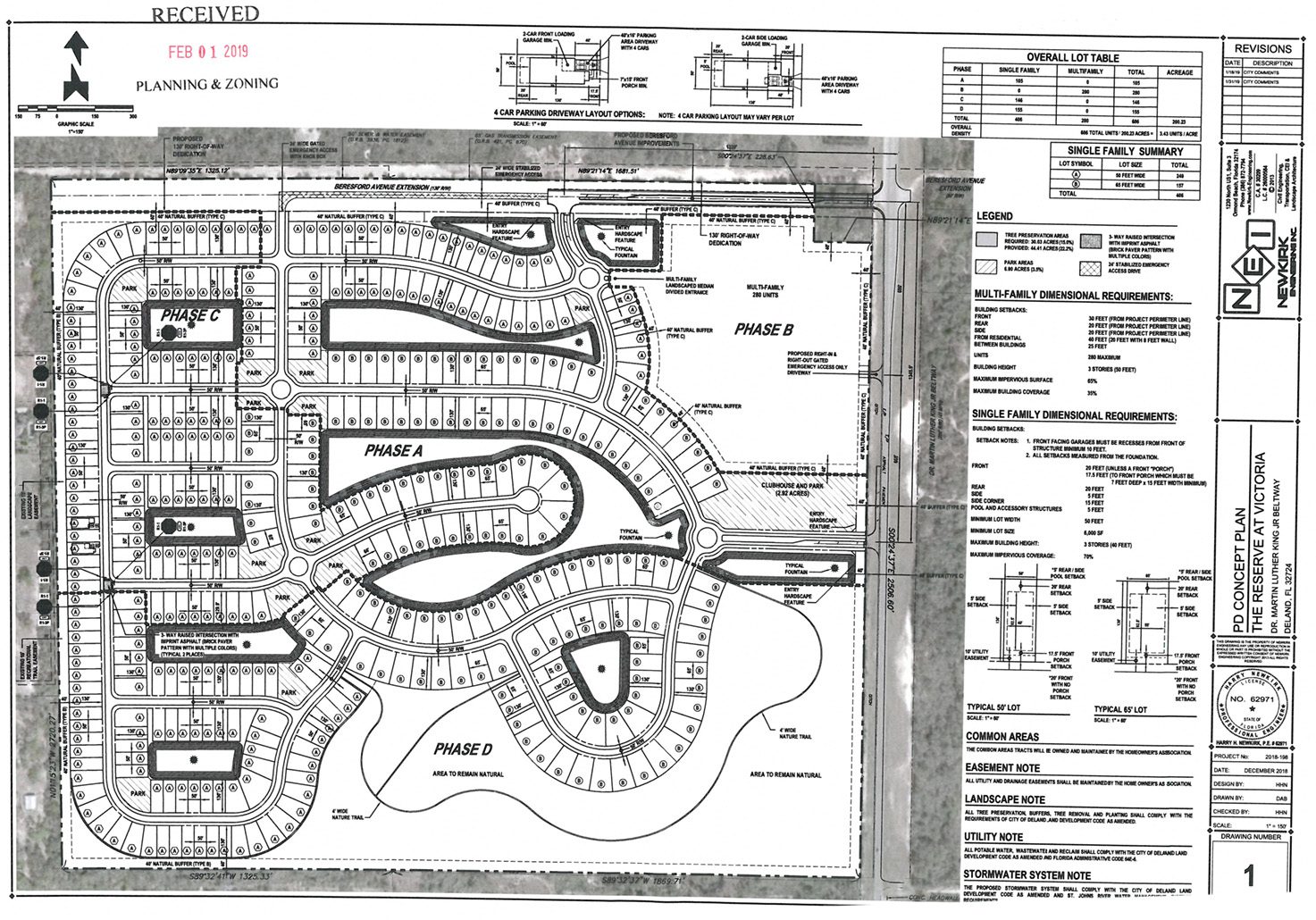 Q: I heard more homes are being added to the Victoria Oaks subdivision in southeastern DeLand, on top of the 580 approved last year. Is that true?

— A concerned reader in Victoria Park

A: The Victoria Oaks subdivision, a part of the sprawling Victoria Park community in southeastern DeLand, was controversial during much of 2017 and 2018.

After much wrangling and opposition from nearby residents and environmental advocates, the DeLand City Commission gave homebuilder D.R. Horton the green light to build the 580-home subdivision.

Sitting on 171 acres of land at the southwest corner of Blue Lake Avenue and Taylor Road, the development raised residents’ ire due to its density, with a mix of lots 40, 50, 60 and 70 feet wide.

More recently, some nearby residents and Beacon readers have been alarmed at rumors that another phase of the project was going to add 600 or more new homes, on top of the 580 already approved.

That’s not the case, according to DeLand senior planner Belinda Williams-Collins.

“There isn’t anything that’s been presented to us to expand that,” she said.

The city did, however, recently receive a request to rezone a large piece of property north of Victoria Park.

According to city documents, AJP of Volusia LLC, a company that lists developer James Paytas of Paytas Homes, and developer Anand Jobalia, as managers, has a 200-acre parcel under contract at the southwest corner of the Martin Luther King Jr. Beltway and the future Beresford Avenue extension.

The company submitted a request to the city in December to rezone the parcel, which was formerly part of the long-dormant Royal Oaks PD, or planned development. Royal Oaks dates back to the 1990s but only ever existed on paper.

If approved, the Royal Oaks planned-development agreement would be replaced by The Reserve at Victoria PD.

A concept plan submitted to the city and last revised Jan. 31 shows plans for 686 homes, both single- and multifamily.

The project would be split into four phases, with phases A, C and D consisting of 105, 146 and 155 single-family homes, respectively, and phase B having 280 multifamily units.

According to the concept plan, the project would set aside 2.92 acres for a clubhouse and park, along with a large area on the southeastern part of the property that would remain natural, featuring only a nature trail running through it.

Smaller park areas are designated elsewhere around the proposed neighborhood.

Plans exist to extend Beresford Avenue east from its current terminus at South Blue Lake Avenue to the Kepler Road/Martin Luther King Jr. Beltway, and eventually on to Summit Avenue (County Road 4139), but the plans have been stalled for several years because of land-acquisition problems.

“We’re working closely with the city and the county to make this happen,” said Glenn Storch, the attorney representing the developers of the project.

Storch described the project as “somewhat upscale,” highlighting the amenities such as the common areas and nature preserve.

It’s not yet known how much money the homes built would sell for, or exactly what form the multifamily portion of the project would take, but upscale apartments are one of the options being discussed.

“There’s a market for luxury apartments, especially with retirees and empty-nesters,” Storch said.