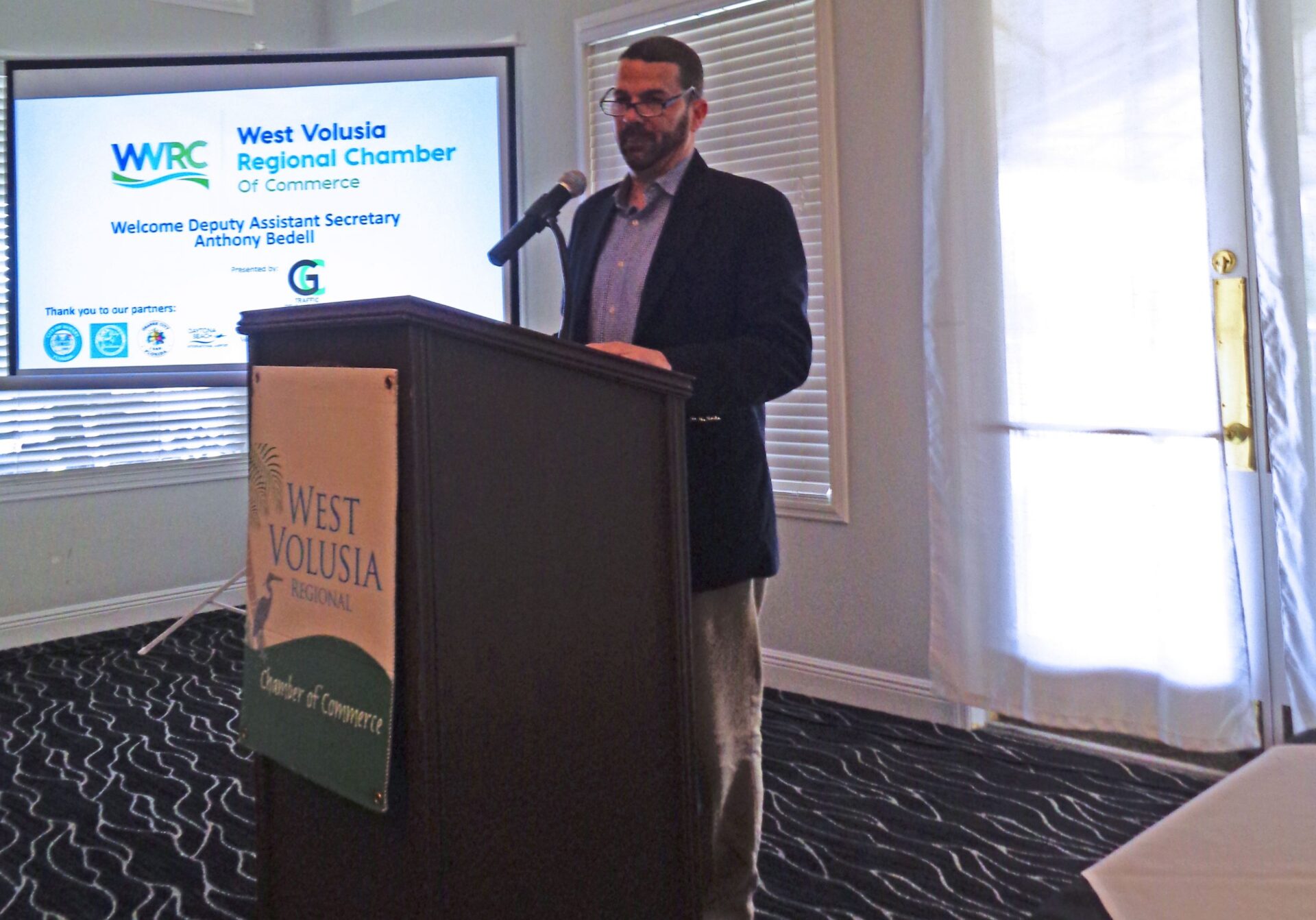 Money raised from a proposed local sales tax for transportation could result in a greater inflow of cash from federal agencies, a federal official told Southwest Volusia civic and business leaders recently.

About 80 people gathered Feb. 22 at DeBary Golf & Country Club to listen to U.S. Deputy Assistant Transportation Secretary Anthony Bedell outline prospects for cities and counties to gain federal funds for roads by putting up some of their own money.

The luncheon was presented by the West Volusia Regional Chamber of Commerce.

“Skin in the game” was the term Bedell used to describe how local governments could gain his agency’s support for their transportation needs.

“We want to see a partnership of federal dollars with state and local dollars,” Bedell told the audience. “We have a new Congress. An infrastructure bill [could] come through the House [of Representatives] by May.”

Despite their partisan differences, both President Donald Trump and leaders of the Democratic Party-controlled House of Representatives have promised to work on infrastructure spending to rebuild, replace and modernize aging roads, bridges, tunnels and airports.

Bedell’s message comes as many in the room were thinking about Volusia County’s upcoming referendum on a half-cent sales tax for transportation and water-quality projects.

The county has set May 21 as the date for a countywide vote-by-mail decision on whether to levy the local-option sales tax. If endorsed by a majority of the voters, the add-on sales tax would go into effect Jan. 1 and remain in effect for 20 years.

The revenues, estimated at $40 million annually, would be apportioned among the county government and the cities. An oversight committee will be formed to ensure the proceeds of the tax are spent with transparency and adherence to a list of qualifying projects.

Supporters of the local-option sales tax say the revenues are needed now.

“The impact fees are on new construction for new roads. The sales tax can be used for repairs,” John Wanamaker, a Realtor and member of the Team Volusia Economic Development Corporation, said.

The county and the cities have each made lists of needs and wants for the sales-tax revenues, which could be used to float bond issues for long-term capital outlays.

Volusia County, for example, has compiled a list of projects totaling $762 million, including projects to improve the water quality in the Indian River Lagoon, Mosquito Lagoon, the Halifax River and the Tomoka River, the waters of Lake Beresford, Blue Spring and Gemini Springs.

County transportation projects include widening Williamson and LPGA boulevards on the east side, along with such West Volusia projects as connecting Harley Strickland Boulevard in Orange City and State Road 472 with a newer and wider Veterans Memorial Parkway.

The county — and the City of DeLand — would also like to extend DeLand’s Beresford Avenue eastward from South Blue Lake Avenue to Dr. Martin Luther King Jr. Beltway, and even to connect Beresford to State Road 44 via Summit Avenue, also known as County Road 4139.

The extension of East Rhode Avenue to North Normandy Boulevard in Deltona would require a bridge over Interstate 4.

County leaders envisioned such a connection as a way of easing congestion on Saxon Boulevard about 15 years ago, but the planned expenditure had to be dropped from the county’s road program because rising costs for road-building materials drained money away from many wished-for projects.

When the recession hit in 2007-08, funding for roads dried up as the collections of impact fees and gasoline taxes dwindled.

While many attending the luncheon voiced support for the local-option sales tax for transportation and other infrastructure, the gathering’s sponsoring organization is neutral on the issue.

“We’re not taking a position,” West Volusia Regional Chamber of Commerce Executive Director Shari Simmans said. “We are strictly an information source, so that people can make an educated decision.”