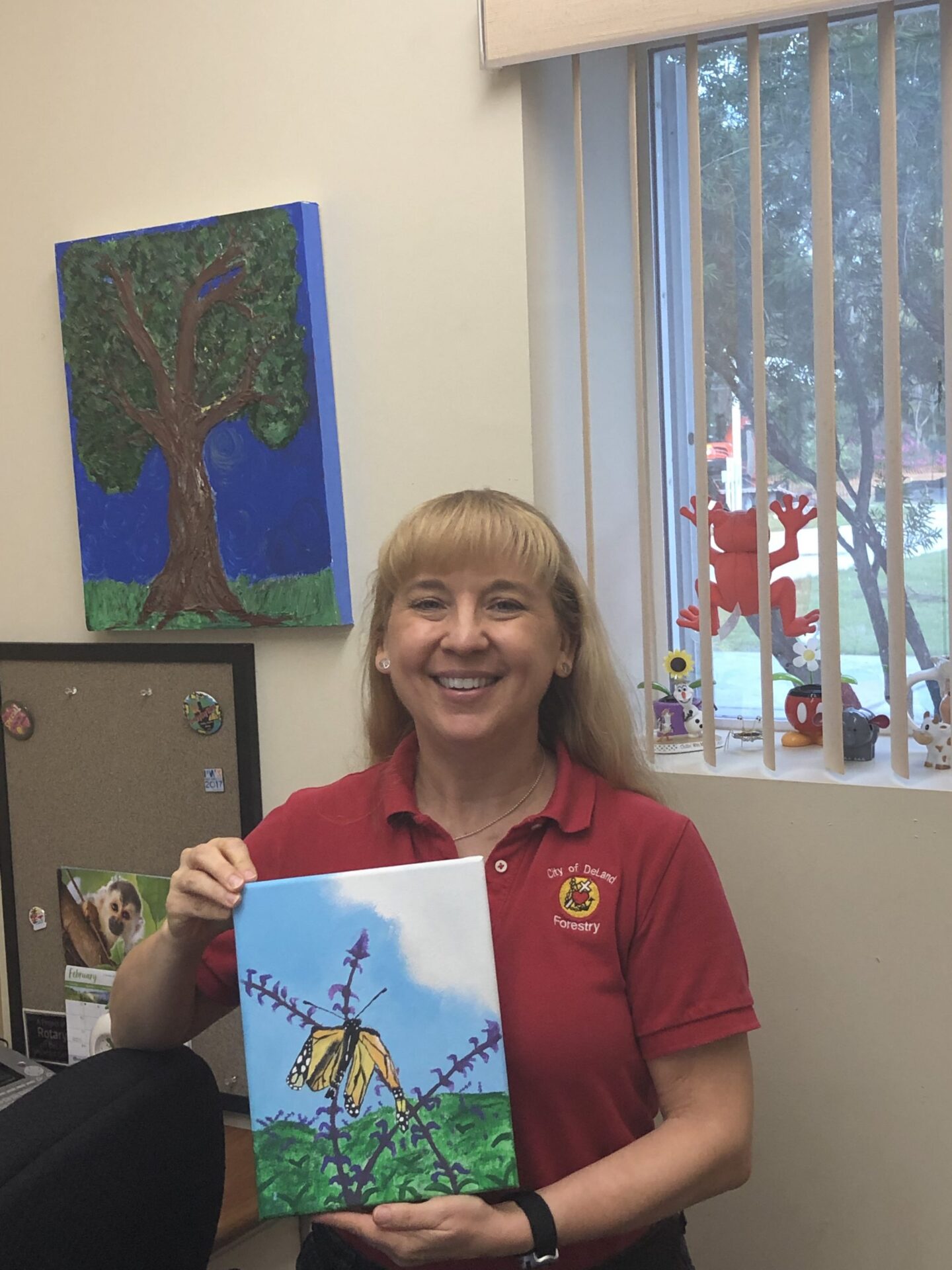 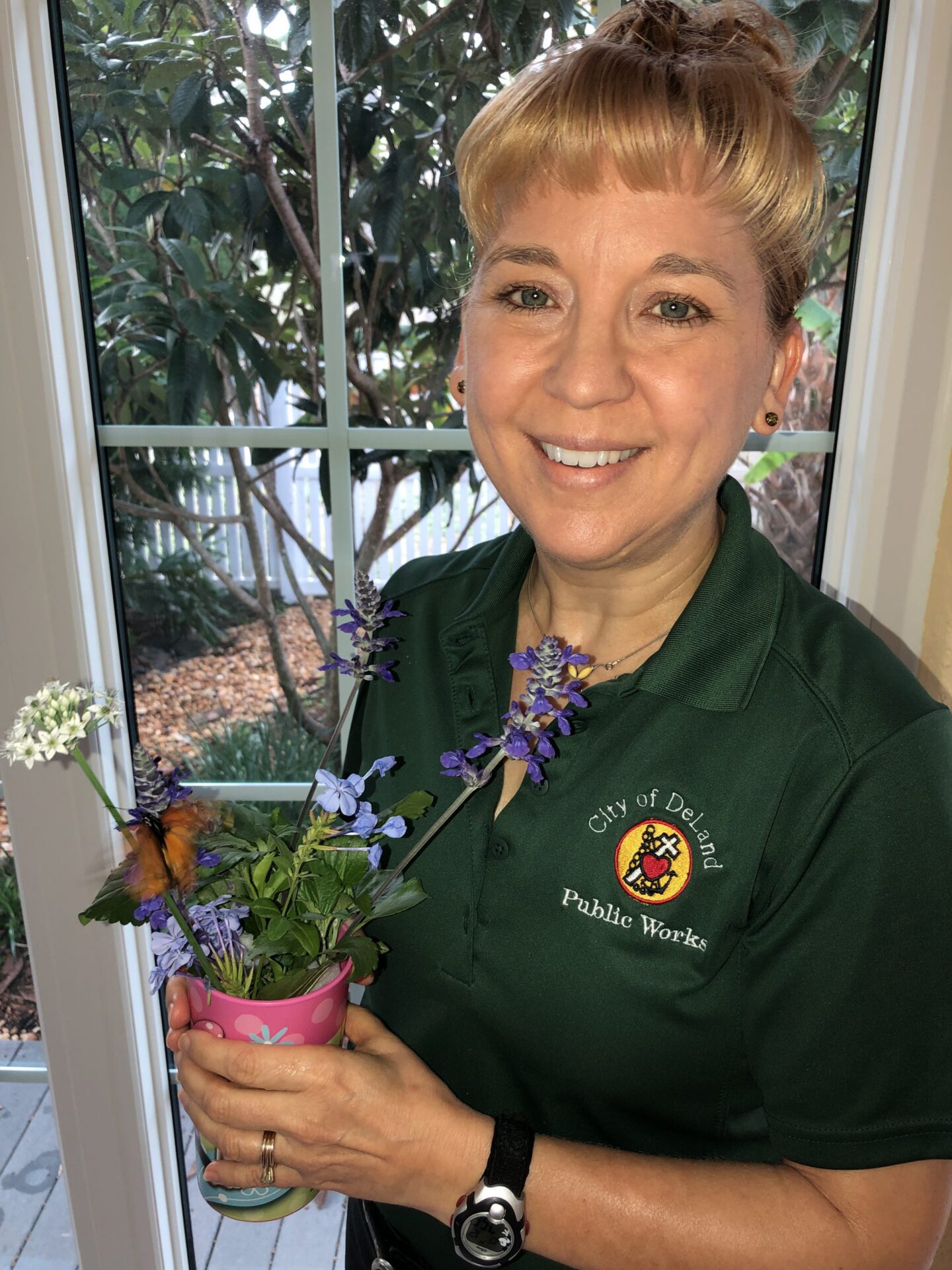 DeLand has recently experienced an influx of beautiful butterflies, thanks in large part to the DeLand Butterfly Society.

The society was formed in early 2018 with the intention of raising awareness about the importance of monarch butterflies, and to encourage residents to create gardens where the monarchs can live and feed.

Monarchs have been in danger of disappearing since the 1990s, as a result of milkweed and other nectar plants disappearing at an alarming rate.

One of those who became interested was City Forester Mariellen Calabro.

Calabro was inspired by the DeLand Garden Club, whose efforts to help the Butterfly Society have led to the planting of more than 100 butterfly gardens. She tasked the city’s Tree and Urban Beautification departments with collaborating to create a butterfly sanctuary at the Public Works Complex on South Garfield Avenue, where her office is located.

Not only is this garden a sanctuary for butterflies, it has been certified as such by the DeLand Garden Club, and is a Florida-friendly landscape. It has attracted many caterpillars and butterflies, and one butterfly in particular stands out.

On the Friday before New Year’s Eve, Calabro said, she was walking from her car into the Public Works building, when she spotted a butterfly walking on the pavement near the garden.

As she got closer, she noticed that the butterfly had deformed wings. She picked him up and tried to place him back in the garden. Originally, she said, she thought the monarch had just emerged from his cocoon and his wings had not yet straightened.

Calabro asked Urban Beautification employees, who were working nearby, to keep an eye out for the butterfly, and place him back in the garden if he got out on the sidewalk again.

After a day of monitoring, it became apparent the wing deformity wasn’t going away, and this butterfly would be unable to take care of himself.

Calabro took the butterfly home. As of mid-March, he had been living with her for 10 weeks, and she affectionately refers to him as “Butters.”

Most butterflies, including monarchs, have life spans of only a few weeks. But, Calabro notes, there are exceptions, called fourth-generation butterflies. These butterflies can live for six to eight months — long enough for a long-distance migration.

“Monarch butterflies have a migration cycle. Every four generations, there is a group that is genetically programmed to migrate, most likely to Mexico,” Calabro said. “It is possible that Butters is one of the fourth-generation butterflies, even though he emerged late for that. He came out of his cocoon in late December.”

Most migrating monarchs begin their voyage south in the fall.

Calabro thought at first that she might be able to surgically mend Butters’ broken wings. She researched the subject and determined that, due to the nature of the damage, surgery might not help.

“One wing bent up, and one wing bent down, and both back portions of the wings were crinkled,” Calabro said.

She determined he would be able to thrive with some extra help, so she made the decision to tend to him and give him the best life possible.

Calabro collects milkweed and nectar plants from the Public Works’ Butterfly Garden, and hand-feeds Butters. Butterflies do not have a strict feeding schedule, and are fine to eat every other day.

She supplements his diet with honey and water to make sure he has the nutrients he needs. Calabro is learning from watching Butters.

“I did not know that they groomed themselves. They feed from a [body part resembling a] straw that curls up, and also groom with it. So, whatever is on them, after they are done feeding, they will absorb through that feeding straw,” she said.

Calabro’s endeavors have not gone unnoticed, and her co-workers have found ways to honor her and Butters. A portrait of the monarch hanging in her office is an example.

“A co-worker, Kit Dennis, who was heavily involved in the creation of the Butterfly Garden at Public Works, his son painted it for me,” Calabro said.

Dennis created the design of the garden, after Calabro advised what plant species would be needed.

Crews from the Urban Beautification and Tree departments have maintained the garden, and tracked the caterpillars found there. At last count, there were 22.

— Zittle is an administrative assistant with the City of DeLand.