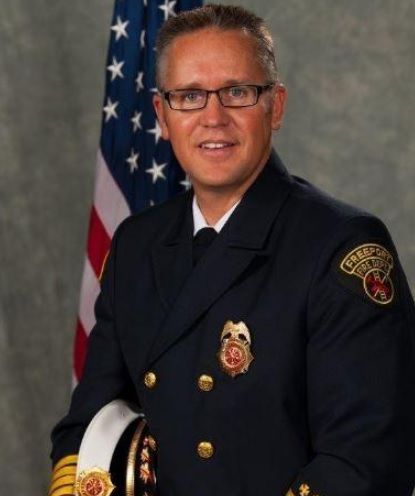 Following the sudden death of its fire chief in October, officials with the City of DeLand on March 18 announced the selection of a new fire chief.

The selection of Allen, who most recently was fire chief for the city of Freeport, Illinois, was the culmination of a nationwide search.

Hanes was 59 years old, and had only become DeLand’s fire chief six months before his death, following the retirement of his predecessor, Chief John McDaniel.

Among other qualifications, Allen holds a master’s degree in organizational leadership from Waldorf University and a bachelor’s degree in fire administration from Western Illinois University.

In addition, Graham said, Chief Allen is a graduate of the National Fire Academy Executive Fire Officer Program and possesses the Chief Fire Officer (CFO) designation through the Commission on Professional Credentialing.

“I am excited about joining the community and serving the great citizens of DeLand,” Allen said, as quoted in a city news release. “The department has been through a lot in the last year, but I feel it is headed in the right direction. I hope to help continue the forward momentum.”