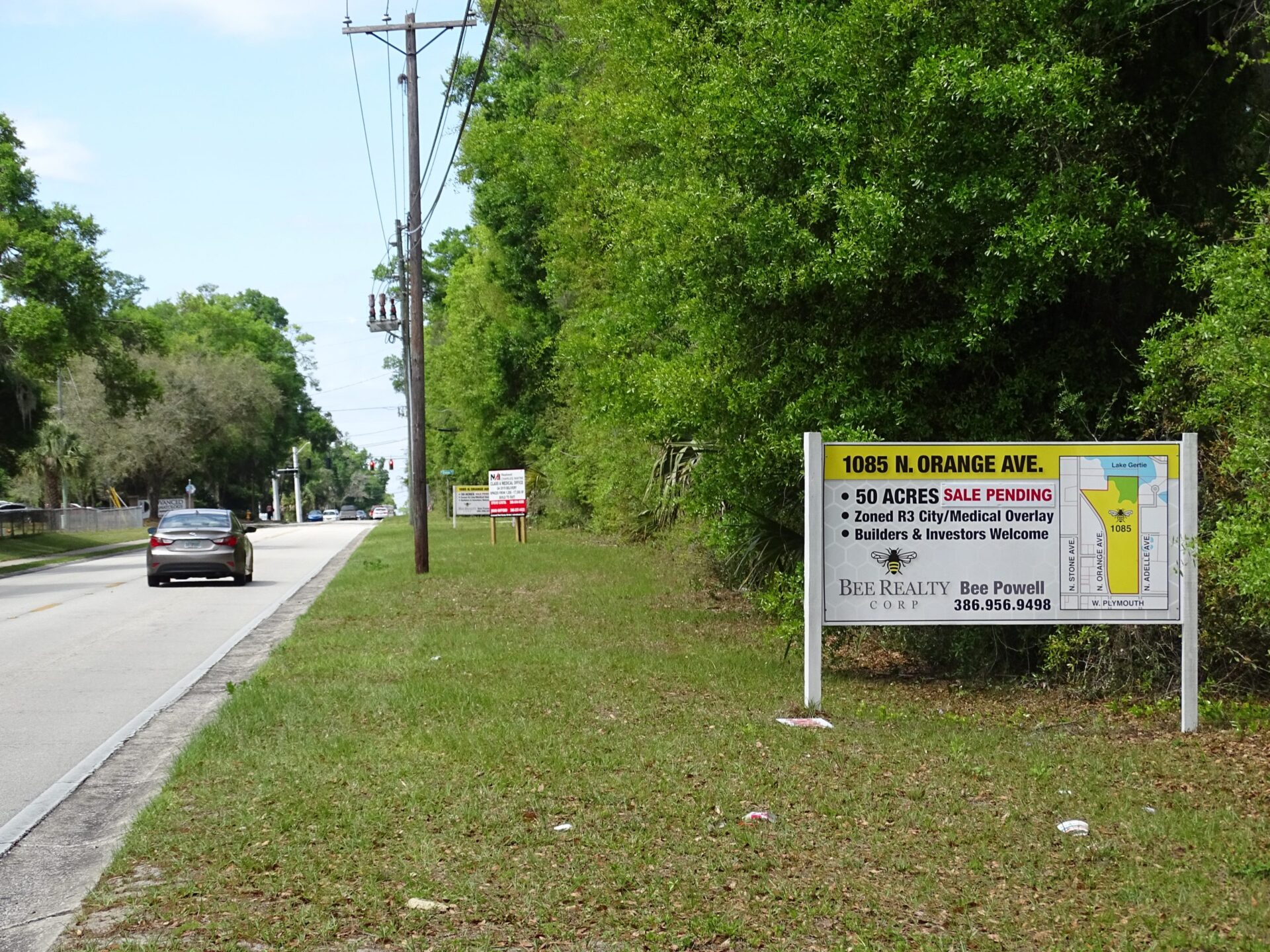 A small group of DeLand residents are worried that a proposed development could clash with their existing homes and ways of life, and perhaps even close the road they use to get home.

If it’s approved by city officials, Lincoln Oaks will occupy nearly 72 acres of land on the north side of West Plymouth Avenue, between North Orange and North Clara avenues.

The project came up for discussion at the April 17 meeting of the DeLand Planning Board. The board, which makes recommendations to the DeLand City Commission, recommended approving annexation of the part of the development site that’s not already in the city limits, along with a change in the use designation now applied to the land.

The Planning Board stopped short of approving a planned-development agreement for the project, however, and continued discussion to its May 15 meeting.

Currently, the project’s backers say it will include more than 270 single-family homes, along with 4 acres set aside for medical-related businesses.

The project site straddles North Adelle Avenue, which currently dead-ends north of Plymouth Avenue and provides access to a handful of single-family homes on large lots along Westoak Drive.

Attorney Mark Watts of Cobb Cole, who represents the developer, Elevation Development of Orlando, said his client intended to ask the city to abandon the 1,500-foot-long roadway, North Adelle.

That would mean the homes on Westoak would need to be accessed through some future, to-be-determined road in the new development.

In addition to those homeowners concerned about how they would get home, Lincoln Oaks also worries residents of the small Washington Oaks neighborhood, which contains several houses on large lots off of North Clara Avenue.

Those residents are worried about traffic, and about the introduction of homes on small lots into their neighborhood, which they are concerned might lower their property values.

Planning Board Member Virginia Comella asked city staff about the status of improvements along Plymouth Avenue between State Road 15A and Woodland Boulevard.

Widening the road to three lanes from its existing two is one of the projects DeLand has proposed to do, in concert with Volusia County, if the proposed half-cent sales tax for transportation passes in this month’s mail-in referendum.

Watts noted his client is working with the county to dedicate land for widening Plymouth Avenue.

The Lincoln Oaks project is split up into three parcels, Watts explained. The portion closest to the hospital would contain 186 single-family homes on 38-foot-wide lots, intended for employees of nearby medical businesses and others who don’t want to take care of large lots.

“It would be less maintenance for those folks, both for people who are employees or who are new families coming into the area that are associated with the hospital, or also for folks who are trying to downsize into houses that don’t require as much maintenance,” Watts said.

The project is just a stone’s throw from the AdventHealth DeLand hospital, and within DeLand’s medical-services overlay district.

The special planning designation is intended to encourage development that enhances and complements the hospital and medical offices near the corner of Plymouth Avenue and Stone Street.

No projects have specifically been developed under the overlay since it was established in 2014, however.

Lincoln Oaks would set aside a 4-acre parcel along Plymouth Avenue for uses “directly taken from the medical overlay,” Watts said, like doctors’ offices and businesses that support medical practices.

“What we have tried to do is recognize that … we haven’t had anything that specifically moved forward over the overlay,” Watts said. “So we’re trying to kind of create a hybrid here.”

Finally, a third parcel of the project, on land east of what currently is Adelle Avenue, would be a traditional single-family development with 86 homes on lots 50 to 60 feet wide.

“We have set this up largely so that there’s a higher intensity of use on the west side of the property, closest to the hospital … and then we step down in intensity and we step up in lot sizes as we head toward the east,” Watts said.

Ford said he had been trying to work with Watts to change the development to protect existing residents, rather than trying to stop it entirely.

“What I see time after time is neighborhood opposition groups who just oppose and they don’t get any accommodation because all they’ve done is fight it,” Ford said. “My approach and my clients’ approach was to try to work with Mr. Watts and try to figure out how to get his clients what they need, and to try to protect my clients’ neighborhood.”

Among other things, Ford said, he and Watts had agreed on several “neighborhood mitigation improvements,” like limiting parking along the access road that would replace Adelle.

“The neighborhood mitigation requirements would include an electric gate … relocation of their existing mailboxes — Adelle Avenue is where they’re located now, and that’s going to go away — underground electric lines … and we’ve also asked to limit trails so they would not be in close proximity to their residences,” Ford said.

The four lots directly south of the Westoak neighborhood would be much larger, as well, with a 100-foot minimum width and 120-foot minimum depth.

Ford said he and Watts were in discussions about architectural standards for the new development, but that no agreement had yet been reached.

Additionally, Ford asked the Planning Board to consider the neighborhood’s requirements as a “major amendment,” requiring any change to go again before the Planning Board and City Commission, rather than being handled by city staff.

Some members of the Planning Board were concerned about approving a mostly residential project in what was intended to be a medical support district.

The city’s planning staff also commented on the relative lack of medical uses in the plan.

“I don’t want to water down the medical overlay,” Planning Board Chair Steve Tonjes said.

Comella echoed some of his sentiments.

Dona Butler, who lives in Arbor Oaks, another small neighborhood near the proposed development, was the sole homeowner who spoke at the meeting.

“In my first local-government course, they taught us an acronym, NIMBY — ‘not in my backyard’ — and I always thought that was kind of funny, until now, when it’s in my backyard,” she said.

Her chief objection was the density of the project. She wanted accommodations similar to those the developers afforded to Ford’s clients.

“I was amazed by the fact that the folks represented by the attorney got to have these bigger lots incorporated in front of their property,” Butler said. “I want the same size lots, too. I don’t want little dinky lots.”

Butler also was concerned about traffic problems — particularly when it comes to turning onto Plymouth Avenue — as well as possible decreases in property value.

Butler said her home is about 3,000 square feet, with a garage “about the same size” as the 1,600-square-foot homes proposed.

Watts told the board he would continue working with Ford and other neighbors, like Butler, to solve the remaining issues.

“We’re trying to provide for transitions without being contrary to what I think our policy statements are in the City of DeLand,” he said. “This is our urban core. This is our area where we’ve designated [it] as appropriate for high intensity.”

In the end, the Planning Board unanimously voted to continue discussing the rezoning of the property to its May 15 meeting.

In a lighter moment at the meeting, Watts compared the project’s delays to another land-use dispute in the late 1990s, over DeLand’s Walmart Supercenter.

“The last time a Watts and a Ford fought over a land-use decision in DeLand, it took five years, and Mr. [Gus] Gibbs ended up with a Walmart,” Watts said.