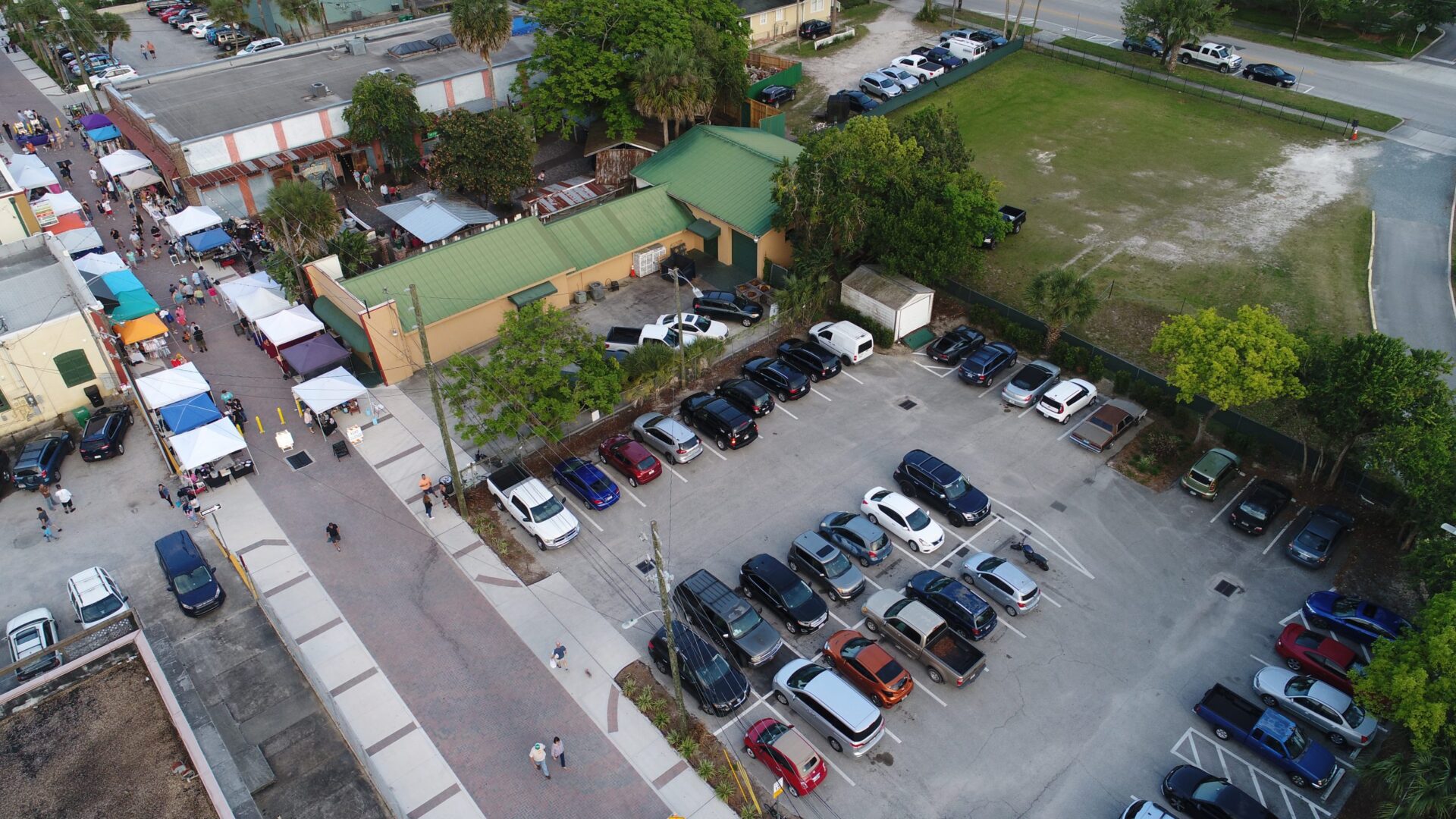 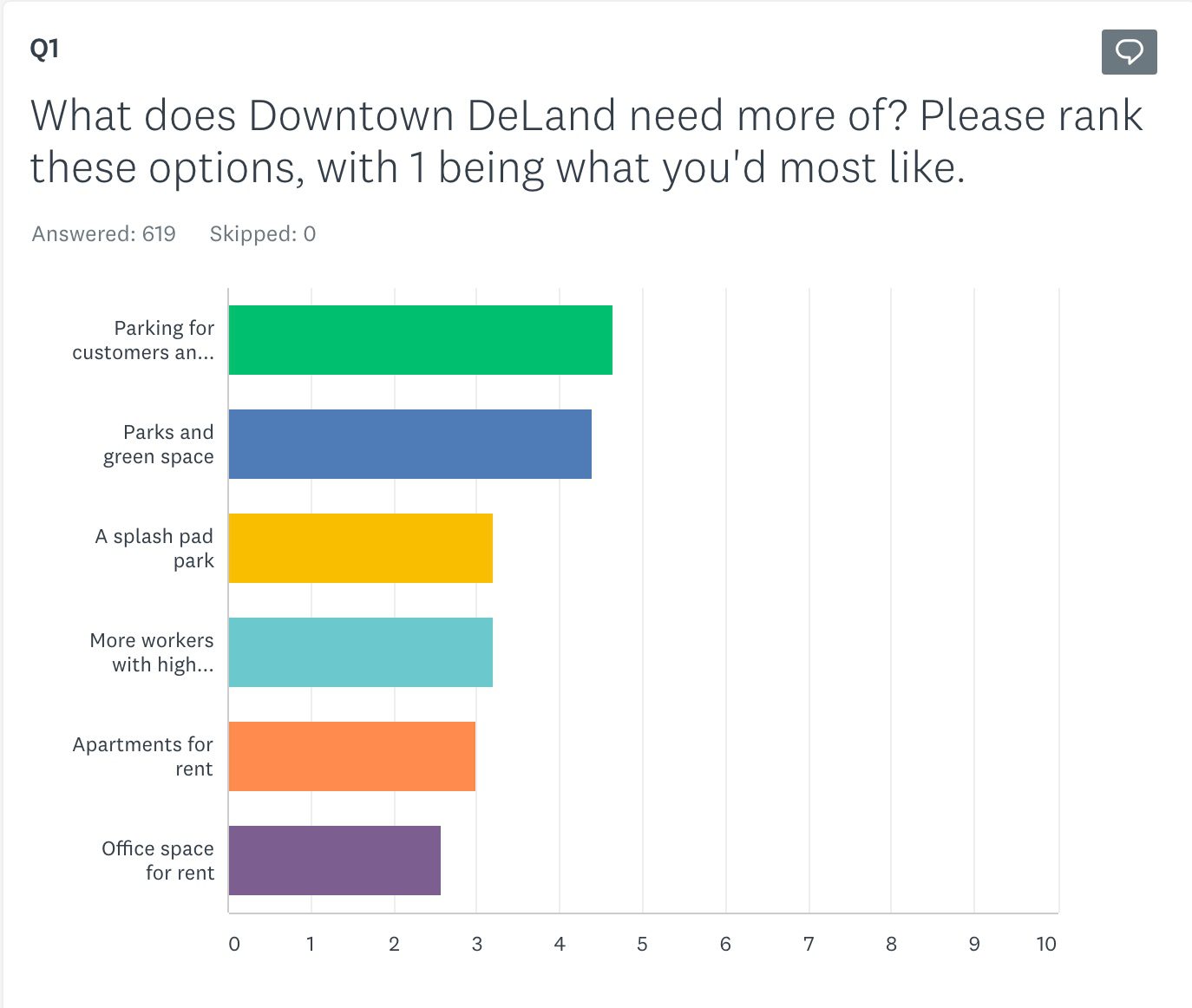 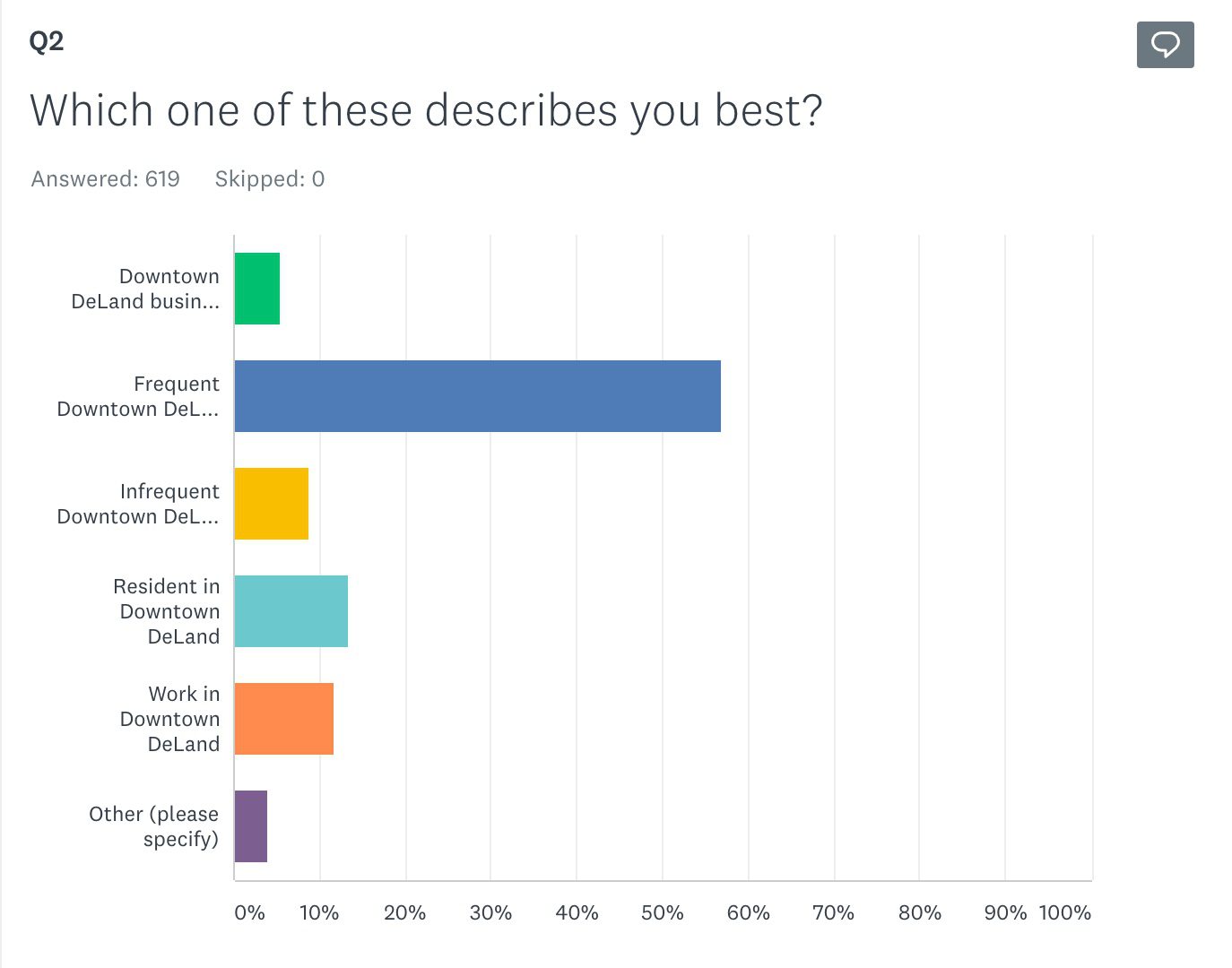 More parking and more green space are the top two things people want to see in Downtown DeLand, according to the results of a recent survey conducted by The Beacon.

In an unscientific online poll conducted for about 48 hours April 23-25, we asked readers to rank six options Downtown DeLand could have more of.

The six choices were office space for rent, parking for customers and workers, a splash-pad park, more workers with high salaries, apartments for rent, and parks and green spaces.

Voters ranked the concepts from 1 to 6, with 1 being the most-desired. Respondents also had the option to submit comments.

The rankings were then weighted to calculate an overall score for a given item, with first-choice votes awarded six points, second-choice votes given five, and so on.

In the overall weighted scores, higher is better.

In total, 631 voters responded. Most identified themselves as frequent Downtown DeLand visitors or shoppers.

More people — 40.6 percent — ranked parking as their No. 1 desire than any other option. Another 38.1 percent ranked it second or third. Overall, parking received the highest weighted score, at 4.64.

Parks and green spaces were close behind, with a weighted score of 4.4. Among the respondents, 24.2 percent ranked this their top priority, with an additional 52.5 percent ranking it second or third.

A splash-pad park — one of the proposed elements of a plan to redevelop the Old Volusia County Jail property — was a distant third, with a score of 3.21, followed closely by “more workers with high salaries” at 3.20.

The splash-pad idea received the highest proportion of No. 6 votes, with 28.3 percent ranking it dead last.

Apartments for rent garnered a middling reception, with a score of 2.99.

Office space for rent — also a central tenet of the Old Jail plan developed by Deltran Operations Inc., which won the bid to negotiate with the city for redevelopment of the Old Jail — ranked last with a 2.57 score.

In all, 55.6 percent of voters ranked having more office space as either their last or second-to-last priority for Downtown DeLand.

In the “other” category, which garnered 3.9 percent of responses, some survey-takers pointed out that multiple categories applied to them.

Of the 631 respondents, 361 opted to leave an additional written anonymous comment of some sort about Downtown DeLand.

Parking and parks were common refrains in the comments. Others asked for more places for youth to hang out, while some didn’t feel Downtown DeLand needed more of anything at all.

“Such a beautiful theatre surrounded by ugly streetscape and abandoned looking buildings,” the anonymous respondent said. “Continuing the theme of Indiana Avenue would help tremendously. Also, a bike share program might be interesting.”

Others took the opportunity to express their gripes about everything from business hours of certain shops, lighting, homelessness, and even an apparent shortage of plans inspectors at DeLand City Hall.

DeLand Mayor Bob Apgar said he wasn’t surprised by parking topping the rankings, while the affinity for green space was both unsurprising and a little surprising.

“I think what that’s really saying is the respondents enjoy the ambience of Downtown DeLand, and they want to extend that enjoyment by sitting in a green area and watching the world go by,” he said.

Apgar noted that there are already a few parks Downtown, such as Chess Park and Painter’s Pond Park.

To see the full set of survey responses, visit https://tiny.cc/dtdsurvey.