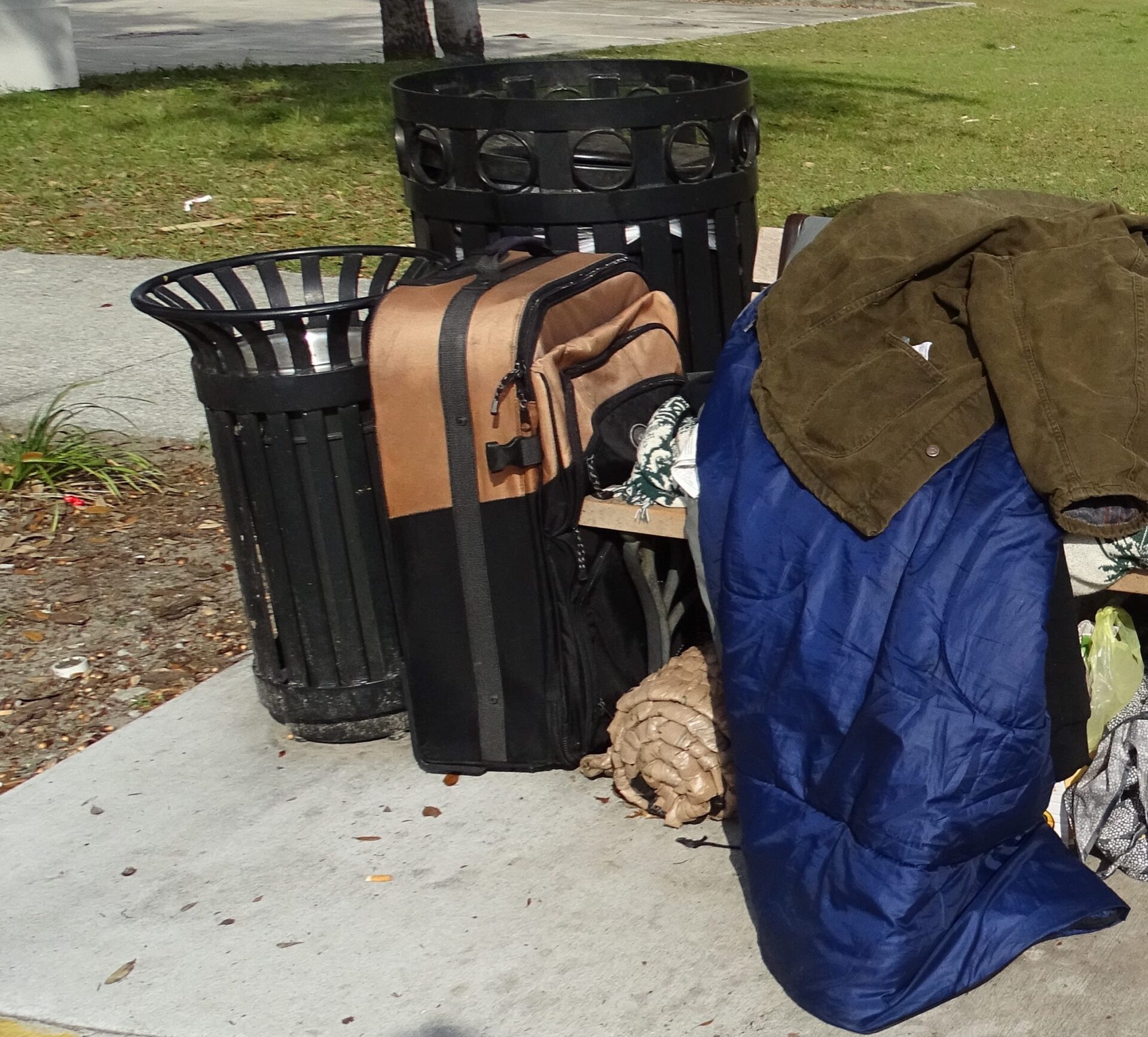 DeLand city officials have decided to tackle what they say is a growing problem with people stacking their belongings on and around public benches and sidewalks in Downtown DeLand and elsewhere.

After some debate, the DeLand City Commission voted 4-1 at its May 6 meeting to adopt an ordinance prohibiting people from using such public places for impromptu storage.

The new ordinance directs DeLand police to make an effort to identify whom wayward items belong to. If the police can’t identify an owner, or if the owner refuses to move his or her property, officers are authorized to remove the offending belongings.

The city would be obligated to store the property for 90 days, before disposing of it as state law allows.

Commissioner Jessica Davis, the lone dissenting vote on the ordinance, expressed concern that the new law could primarily end up being used against one of the city’s most vulnerable populations — its homeless.

She also questioned whether there is a big enough problem with abandoned property to warrant a new ordinance.

“I don’t necessarily think we have any data about how the city has received numerous complaints. No one was really able to tell me what type of complaints. It was just kind of opinion-based,” she said. “So, if this did pass, I would like for us to have some data, maybe six months’, to say why we’re doing this ordinance, because I still feel this ordinance is not necessary.”

Davis said she would like to know more about exactly how officers would apply the law, and to have some data on the law’s use before reconsidering the ordinance in the future.

Vice Mayor Charles Paiva countered some of her concerns, saying the city would have to follow state law on disposing of property, giving owners of abandoned property at least three months to reclaim their belongings.

“Whether it was designed for one person or not, we unfortunately did not have any legal recourse based on that,” he said. “So hopefully we never have to use it again, but unfortunately, we learned in that period that we didn’t have anything in our laws.”

Paiva was referring to the city’s longtime problem involving Earl Edwards, who was a fixture on Downtown DeLand benches — alongside suitcases and bags of his belongings.

City officials worked with The Neighborhood Center of West Volusia to get Edwards off the street in late February, and he hasn’t been seen as much since. As part of their efforts, city officials resorted to “buying” Edwards’ possessions — with City Manager Michael Pleus’ personal funds — to persuade him to de-clutter the city bench he often camped out on.

“We see how it can be a problem, because obviously we saw a giant pile of stuff, and we didn’t have any legal recourse,” Paiva said.

Paiva did agree with Davis that the City Commission should see data in the future, showing if the new ordinance has needed to be utilized at all.

“Certainly, our officers need to be very delicate in those situations, which I think we were with the one person we’re essentially talking about,” he said.

Still, Davis felt it was unfair that other city officials “keep going back to that one situation” as justification for such ordinances.

DeLand Mayor Bob Apgar pointed out several other situations he’s seen recently that the law could possibly be used to tackle.

“There was a person that was, I think maybe with permission, that had a lot of paraphernalia in front of Tony’s. From time to time, there’ve been people in front of what I call Baumgartner’s building with large assemblages of property. The other day, at the 7-Eleven, there was an individual on a bench with a couple of suitcases,” he said.

Apgar said while the Edwards situation may have started the discussion, the problem wasn’t exclusive to him.

“All this is is an arrow in the quiver. Our Police Department does not want to have to enforce this,” Apgar said. “It is absolutely a rigorous process to go through that. Every time they go through it, they may end up repeating it if the property is reclaimed.”

The mayor also pointed out that, in Edwards’ case, the property in question was rarely unattended.

“If they stay with their property, this ordinance is ineffective,” Apgar said.

The ordinance specifically exempts items left on a public sidewalk or street with a permit, or items “used or associated with lawfully operating businesses,” along with conveyances like bicycles, baby strollers and walkers temporarily left outside a shop or other facility.