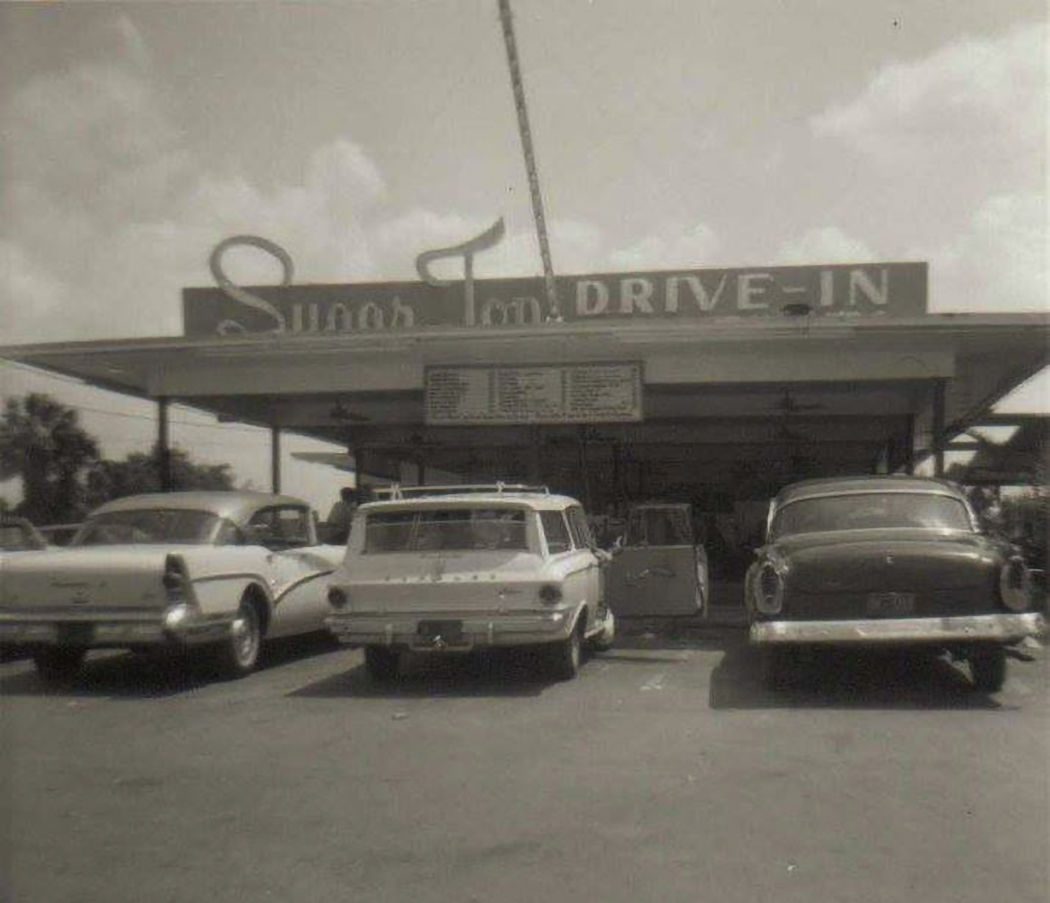 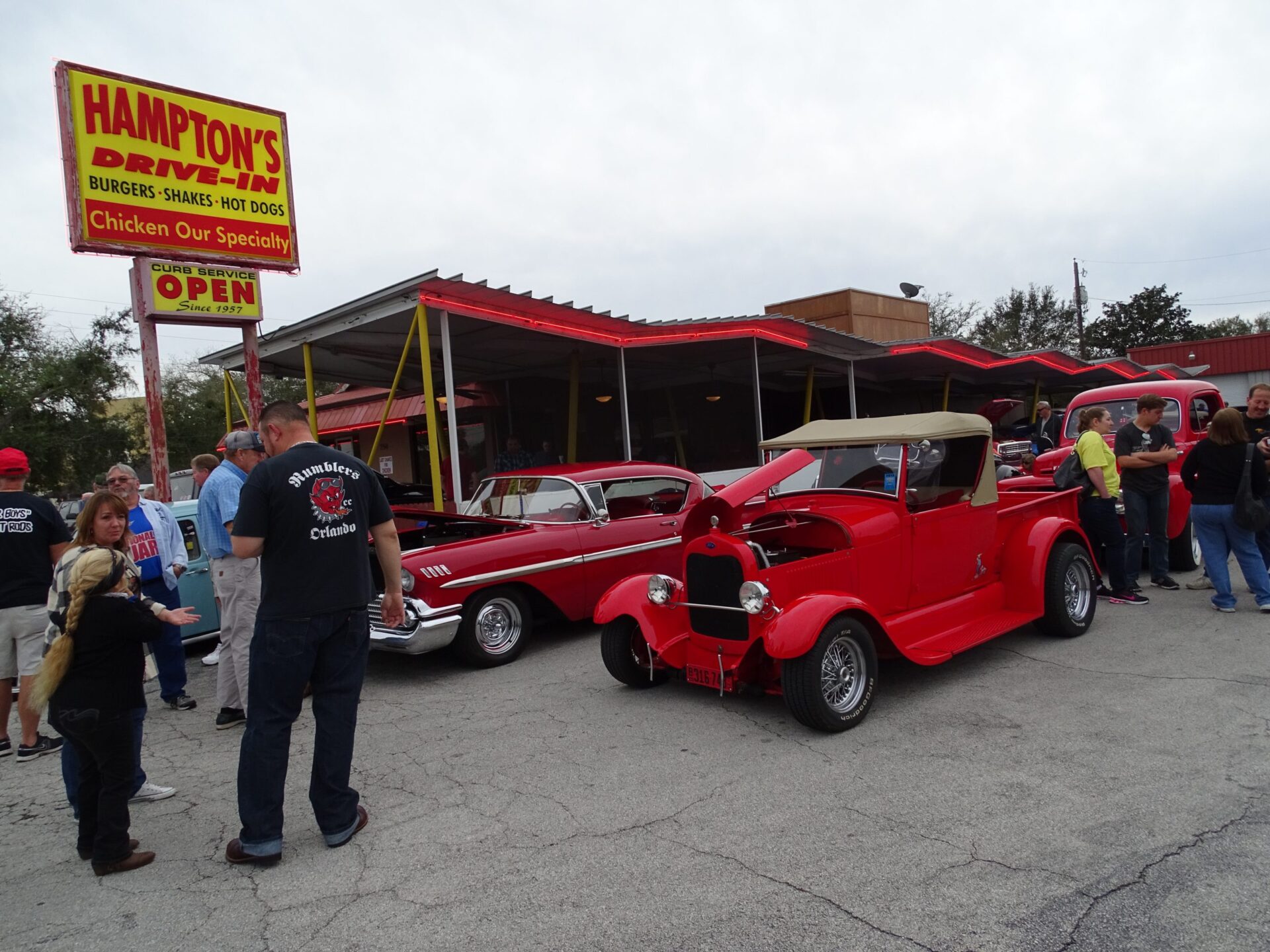 If you know folks who have been in DeLand for many years, ask them, “Tell me about the Sugar Top.”

We all have a story.

The Sugar Top was a drive-in hamburger restaurant. A true drive-in. Drive up, blink your lights, and a waitress would take your order, then deliver the meal on a metal tray that hooked to your window.

Later, it became famous-for-fried-chicken Hampton’s, and the drive-in service continued for a time. The location, on the southwest corner of International Speedway Boulevard and North Amelia Avenue, now houses a mattress shop in a new building, without a hint of the site’s colorful past.

The history and story of Sugar Top go back to the mid-1960s. Mr. Sugar (his real name) opened his restaurant in a local environment that was devoid of the true drive-in experience.

At that time, the restaurant part was all open-air, with a decorative fountain and granite copy of the Ten Commandments in the middle.

Mr. Sugar was very supportive of the community and its youth. Early on, he must have recognized that Sugar Top would become a hangout for teens who had no other local gathering place.

The crowd that hung out there was a cross section of DeLand youth, and the hamburgers were good and shakes were thick.

In the 1960s, DeLand had an active car and hot-rod culture. Kids would park their cars all over the site and would rev the engines. Imagine the movie American Graffiti, and you have the idea.

It seemed that many weekend nights had kids ending up at the Sugar Top. Guys cruised for girls, and girls cruised for guys. It was all very innocent in a midcentury way.

My favorite memories of Sugar Top revolve around cars. But these were not your average teen muscle cars. These were full-on dragsters.

The National Hot Rod Association (NHRA) decided that DeLand would make a great venue for its Winter Nationals, and that the best time would be in February during NASCAR’s Speedweeks in Daytona Beach in the late 1960s.

It made some sense, as stock cars and dragsters appealed to the same crowd.

The City of DeLand leased the association a vacant runway at the airport and distanced a quarter-mile strip. It was a big deal. All sort of dragsters ran: rails, street cars, bracket cars, motorcycles and even a few jet-powered cars.

The high school didn’t have air conditioning and, with all the windows open, you could easily hear the cars running the quarter-mile all day long.

For teen boys, it was nirvana. Algebra took a back seat to the distant roar of dragsters.

Since the Sugar Top was so close to the airport and drag strip, many participants and fans ended their evenings there.

It was common to see a car (no rails, for those who know the difference) come right off the strip and into the parking lot. No tag, no mufflers, and giant blower scoops sticking up from the hoods and huge rear-tire slicks.

Most were not even street-legal.

At that time, there was no development along this area of International Speedway Boulevard (then just called Highway 92); it was only a two-lane road bordered by orange groves.

The spirit of high octane was in the air, and cars would run down the length of the highway as if on the strip.

Huge noise, smoking tires and flame from open headers. It was glorious. I don’t remember a single instance of police interference.

It was a time in America when anything was possible. When the spirit of adventure and excitement ran through our veins like racing fuel.

It was loud, fast and over the top. Sugar Top. What a name. What a place.

— Mancinik is a fifth-generation Floridian and a native of DeLand. He has been an active Realtor for more than 40 years. The Beacon invites you to share your memories of growing up in West Volusia. Send compositions of 600 words or so to info@beacononlinenews.com, or bring them to our office at 110 W. New York Ave. in Downtown DeLand. Include photos if possible.