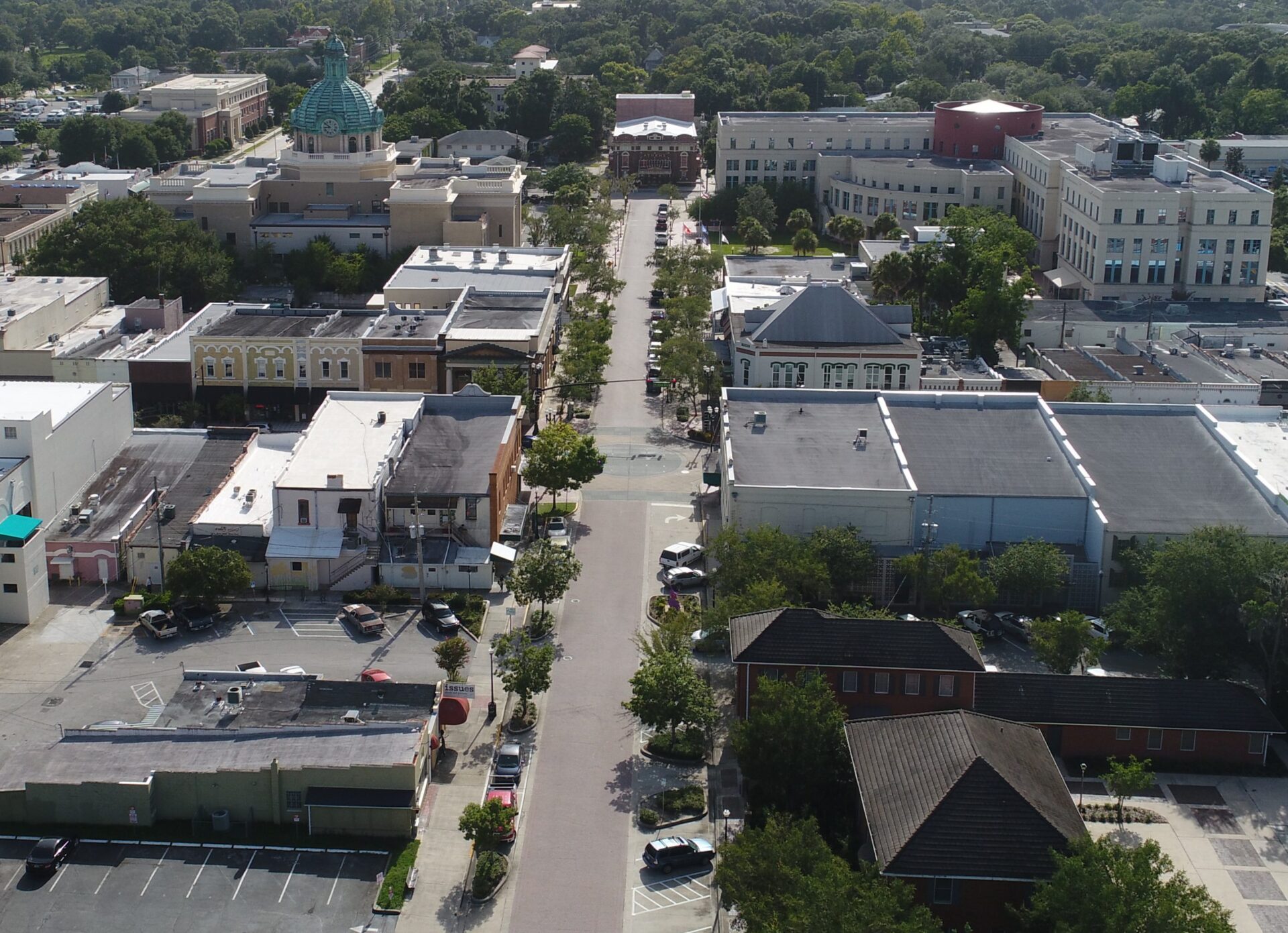 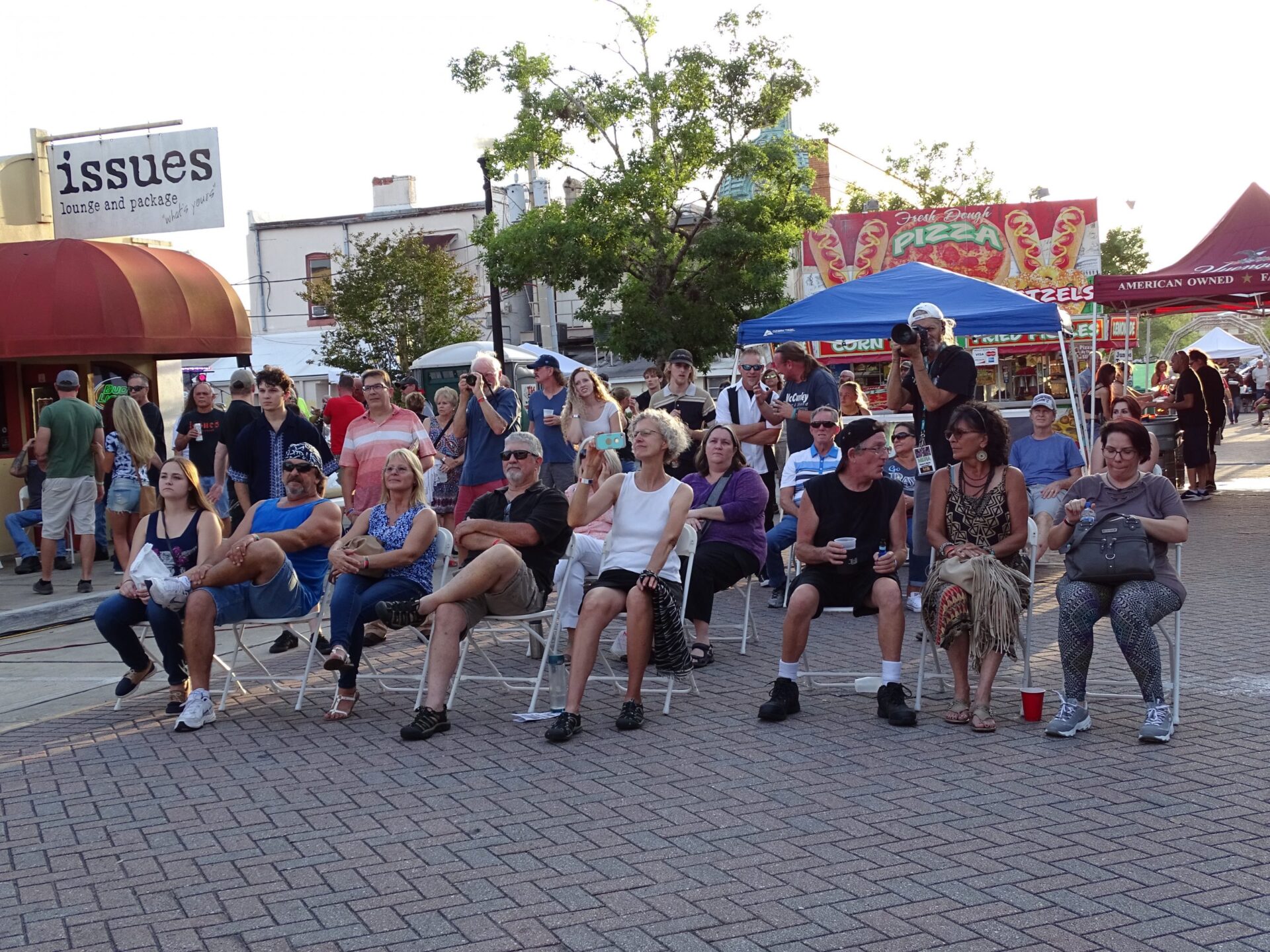 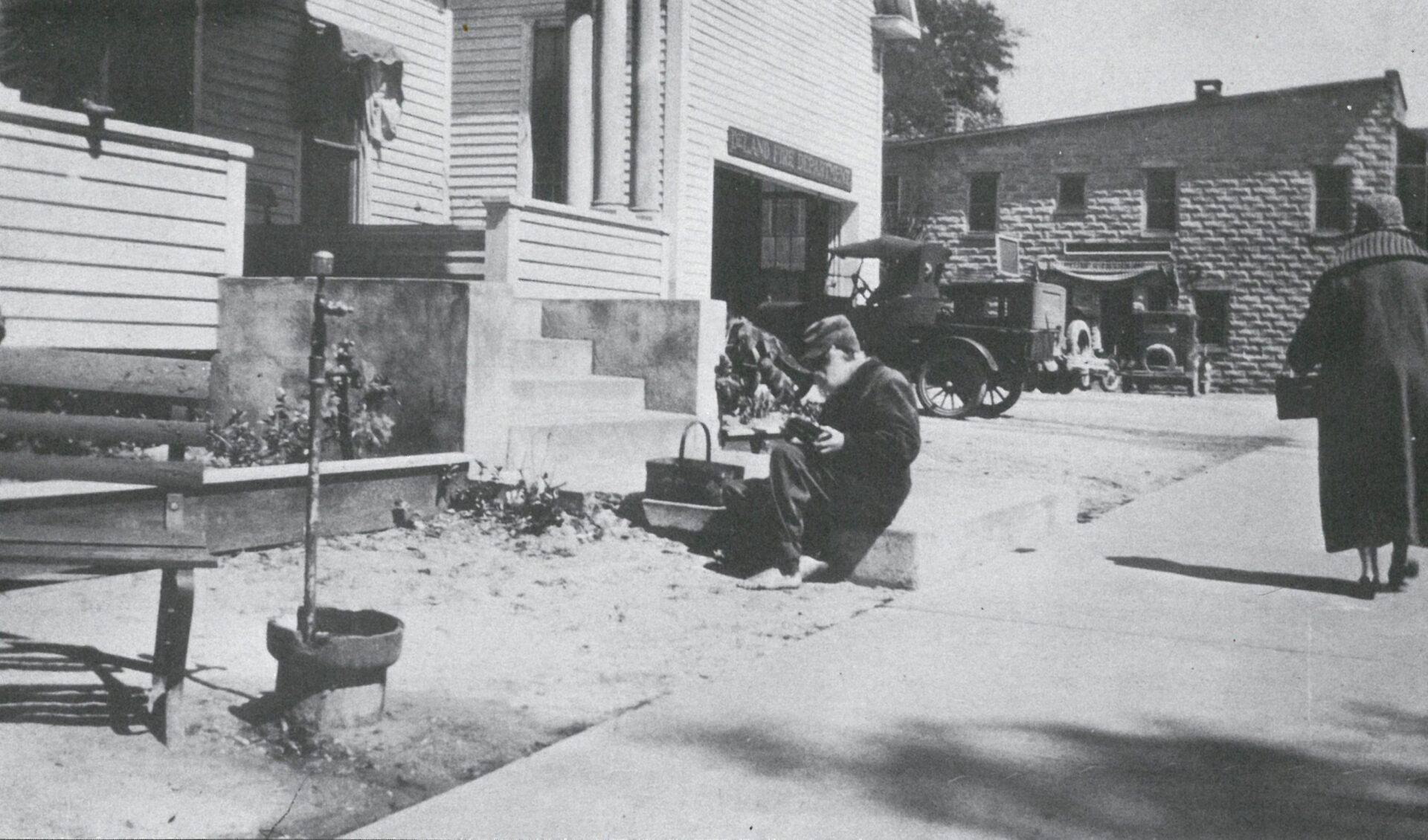 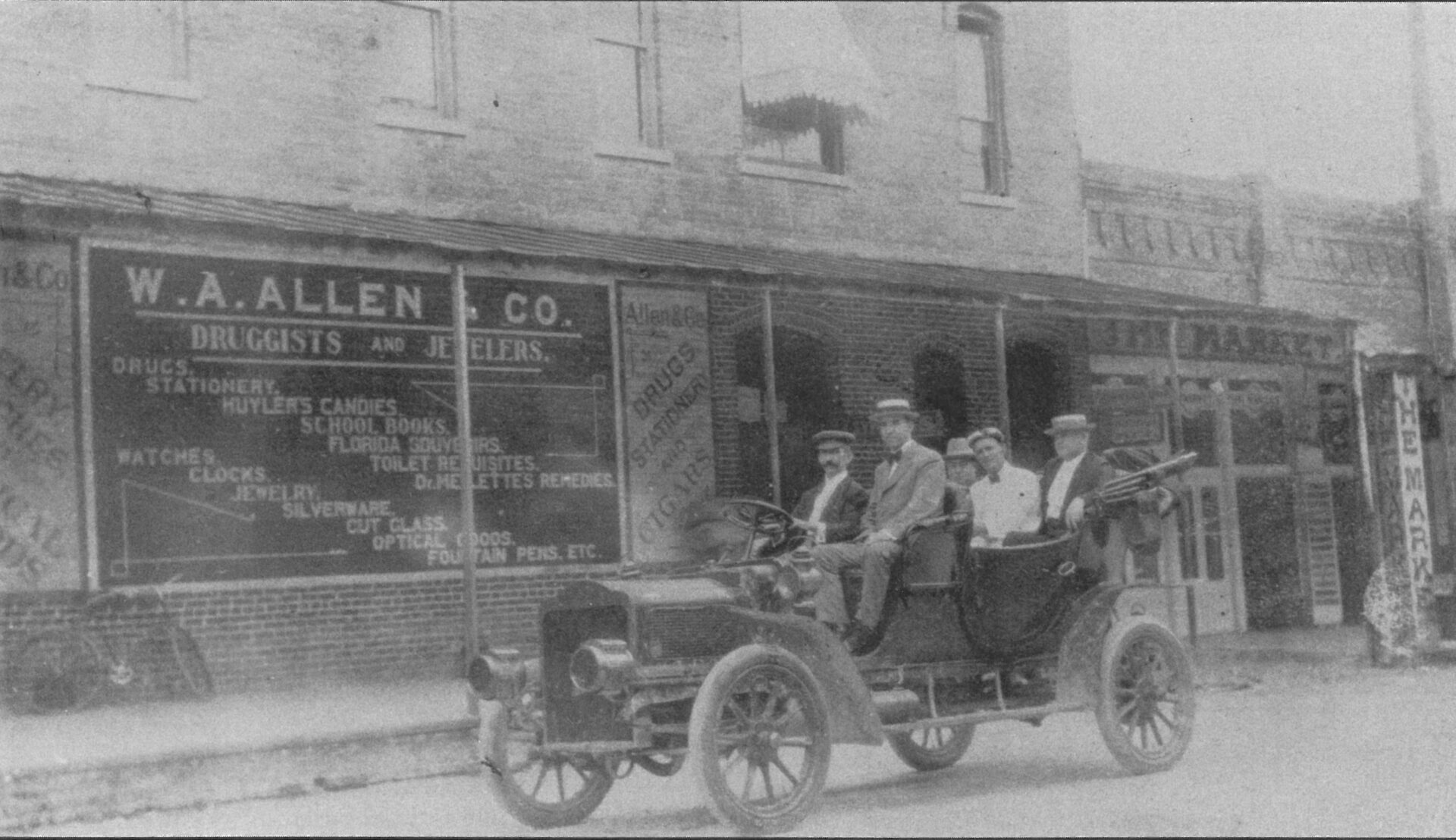 Who among us has not delighted in a stroll on Indiana Avenue, to enjoy one of the many venues that have become benchmarks for our town?

But if you listen carefully, can you hear the voices from the past there? Indiana Avenue is the very heartbeat of DeLand, and always has been. It’s hard to envision this street beyond the modern tree-lined brick avenue flanked by the Historic Courthouse and Kelly Administration Center, with the Athens Theatre resting at its foot.

Not that many generations ago, it was pretty much a piney woods where early pioneers left their cabins to come in mule-drawn wagons to meet Henry A. DeLand and hear him say, “Here I will build a town.” Where we now enjoy a glass of wine at The Elusive Grape is but steps away from where Henry DeLand planted his flag.

And, why is it called Indiana Avenue, anyway? Because Henry DeLand met a lady from Indiana named Hettie Austin who came with her husband — also named Henry — to this place called “Persimmon Hollow,” where Henry DeLand had visions of making his fortune in oranges.

Hettie hated every breath she drew in this God-forsaken, mosquito-infested outpost, just shy of being a swamp. But, being the daughter of a Methodist minister, she thought she might find it barely tolerable if she just had a Methodist church.

She took her pathetic mule and wagon from cabin to cabin, begging for a dollar here and a dollar there until she had accumulated around $400, not a bad haul for 1876. Henry DeLand told Hettie he would match her $400 if she would agree to build, not a church, but a schoolhouse that could be used as a church — for everyone — on Sundays.

Hettie said, “OK!” And thus it was that Henry Austin declared in that small clearing, “We should name our town DeLand! And while we’re at it, let’s name this street Indiana.”

Well, I wasn’t there, but this is how I hear the voices.

Ten years later, in 1886, there were plenty of voices on Indiana Avenue, all yelling ”Fire!” One of those voices came from the youngster Vincent Ward Gould, who had been brought here as a lad in 1885.

When the “Great Fire” that began in the Wilcox Saloon swept north up Woodland Boulevard, it took down everything east and west in its path. On the corner where today is Pat & Toni’s Sweet Things was DeLand’s first grocery store, owned by R.C. ”Pop” Bushnell.

Young Gould stood at the top of a ladder where a bucket brigade handed him water to pour on the grocery-store roof. Miraculously, it kept the fire at bay, and the north side of Indiana Avenue was saved.

In later years, Gould’s voice might whisper “Admission 10 cents!” when, in 1907, he and a pal named Arthur Voyle opened up DeLand’s first movie house where Cress Restaurant is today.

There were straight-backed chairs and a sheet for the screen. The projector was hand-cranked by a rarely sober operator, while a piano player added his musical touch. If the film raced ahead or accidentally went backward, so much the better for entertainment!

Gould, the lad, became Gould the man, who was involved in virtually every civic undertaking in the growth of the town, and whose real estate and insurance firm continues today on North Woodland Boulevard.

A bit farther down the block on Indiana Avenue, you might hear the raised voice of Isaac Stewart, an attorney largely credited with gaining the county seat for DeLand. Stewart equipped his law office with a sound system on the roof, which he used in characteristic high dudgeon to verbally lambaste the city commissioners.

Leaning on his First Amendment right of free speech, Isaac was never served with a warrant for disturbing the peace, as far as I know. His law partner, Arthur Hamlin — DeLand’s first attorney — was not only soundly pummeled by opponents of the county-seat issue, he was shot at on his way home one night. And, you thought the current political climate was hot!

Later still, across the street from the Stewart & Hamlin law office, was the upstairs office of J.C.M. Valentine who — among other talents — was a surveyor.

An outspoken man who was born in Birmingham, England, Valentine was the father of one of DeLand’s most beloved surgeons, Dr. Frank Valentine. J.C.M., who apparently was given to impulse, brought his family to DeLand from Virginia in 1924 when the fire went out in his Virginia furnace.

Ribald stories abound of Valentine holding forth on the merits of Anderson’s Bar. But I knew him as a gentle maker of magic. Using his rolls of blueprint paper, he taught us as Girl Scouts to fashion delicate designs by laying leaves upon the paper and watching it turn blue where exposed to sunlight.

With air conditioning a thing of the future, we all lived with our doors and windows open, so no matter which side of Indiana Avenue you walked upon in the 1940s, you would hear the musical scales coming from the second-story windows of Lillian Wells’ music studio. La-la-la-LA-la-la la! La-la-la-LA-la-la la! Over and over.

Patrons walking below would smile and conduct the scales with their hands.

However, music had never been a stranger to Indiana Avenue because two decades earlier, architect Medwin Peek erected a beautiful bandshell for the park where the county administration building is today. Sundays were given over to band concerts, with “Pop” Bushnell as conductor, for more years than I can count. The voice I loved most, though, was from the peanut vendor. “Get your peanuts here!”

Below the Wells studio, where the Half Wall restaurant is today, was Reeve and Howard, a venerable gift shop begun in 1905 by two young Stetson University women named Grace Howard and Edith Reeve.

This was a one-stop-shopping adventure where you picked up the latest bric-a-brac while chatting it up. Perhaps the voice that still speaks to me most clearly is that of Ruby Kruse, who, with her sister Olive Kruse and Dora Rehbehn, became the second generation of owners of Reeve and Howard Gift Shop.

In the back of the shop was a small lending library, where one simply picked a book from the shelf and wrote his or her name on a card, along with the book title, and put the card in a little box on the desk.

Spying a book I had heard about but was too shy to ask to buy, I dutifully filled out the card and tucked the book under my jacket. When I reached the front door, Ruby Kruse’s voice rang out from the back to the front for all in the shop to hear: “Sally Ann, does your mother know you are reading Lady Chatterley’s Lover?” Clearly, this was a village raising its children.

Listen carefully the next time you visit Indiana Avenue. Some of these voices may be speaking to you.