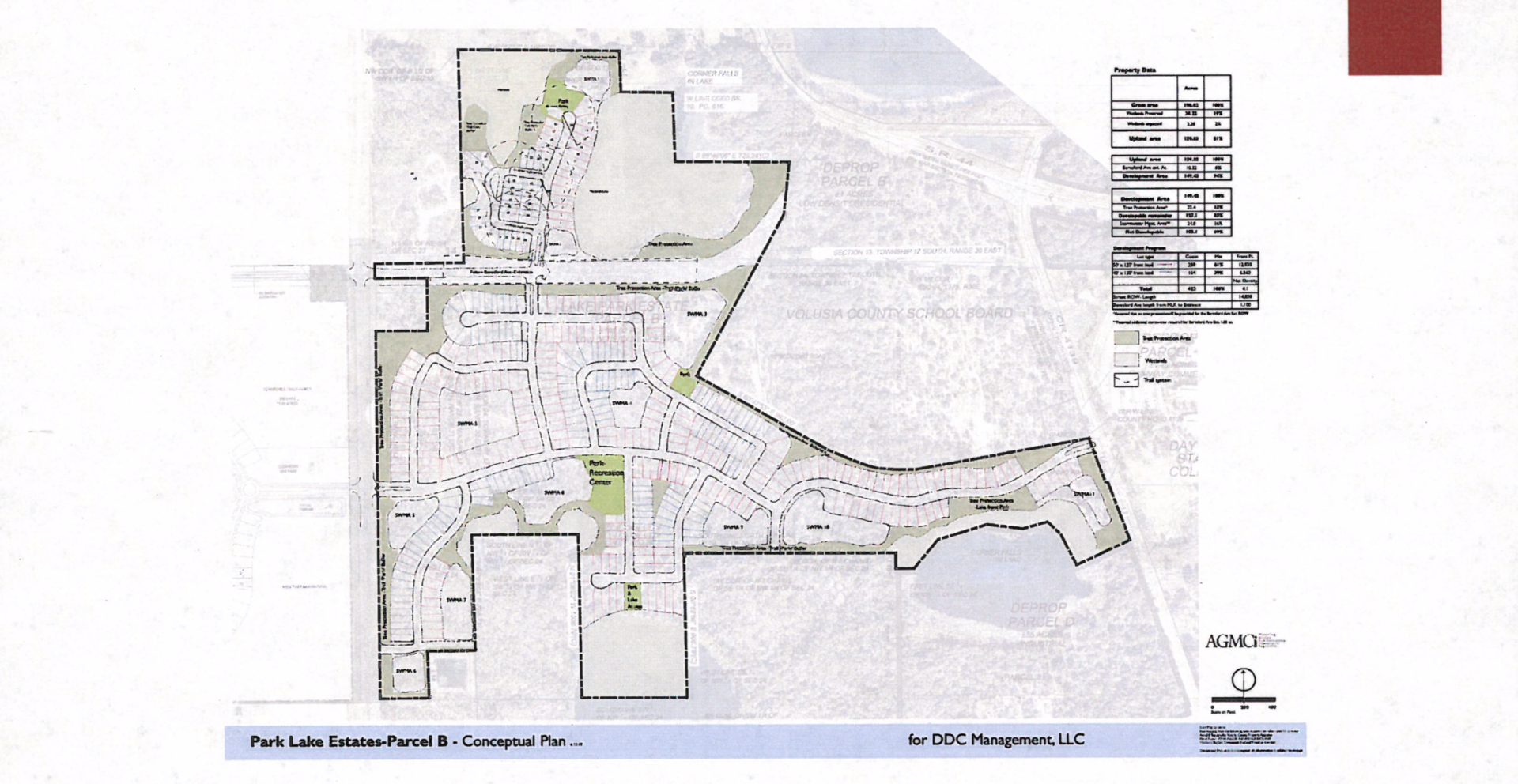 A proposed neighborhood that would add more than 400 homes on small lots to DeLand’s eastern fringe was met with a lukewarm reception from city officials.

Watts was asking for general comments, rather than for approval of the plan or a zoning or land-use change.

It was an unusual step, DeLand Mayor Bob Apgar acknowledged, since such developments don’t typically come before the City Commission simply for comments and discussion.

The size, scale and location of the proposed subdivision, however, made it a bit of a special case.

DeLand, which is experiencing a rapid rate of growth, has recently had to grapple with how to handle new subdivisions featuring small lots 40 or 50 feet wide, or even smaller.

The city recently adopted new guidelines for such developments, requiring them to incorporate more parking, among other requirements.

Watts, along with planner Geoff McNeil of consulting firm AGMCi, explained that the 411-lot Park Lakes subdivision was designed to be walkable, with an internal trail network and several parks throughout the community.

The concept plan also leaves space for the proposed Beresford Avenue extension, which would run east from Kepler Road and the MLK Beltway, through the northern portion of the property, and connect to Summit Avenue/C.R. 4139.

The plan calls for homesites fronting Lake Diamond, Lake Moore and another small lake. The development has raised concerns from neighbors about water quality in the area’s lakes. The development is just south of Lake Winnemissett, which is connected by a canal to Lake Diamond.

Watts said the developer has looked at making the streets 52 feet wide, as opposed to the standard width of 50 feet, to allow for more on-street parking.

The size and density of the development perturbed some members of the City Commission.

“When we had the discussions about small-lot subdivisions, particularly ones with as many lots as this, I don’t think it was the contemplation of me and the commission as a whole that you’d have a 470-lot subdivision just made up of 40- and 50-foot lots, [but] that there would be some mix of some larger lots,” Apgar said.

“I’m fine with some lots being less than 50, but I’m with Kevin … I would like to see some more variance in those sizes, instead of just 411 small lots,” Vice Mayor Charles Paiva said.

DeLand city planning staff also raised questions about parking, water quality, the effects on traffic flow on nearby State Road 44, and controlling access to the lakes within the subdivision and at other points.

No formal action was taken. Watts thanked the commissioners for their input.

The feedback will be used to revise the development plan, which will likely appear before the DeLand Planning Board and City Commission in the not-so-distant future as the project moves forward.