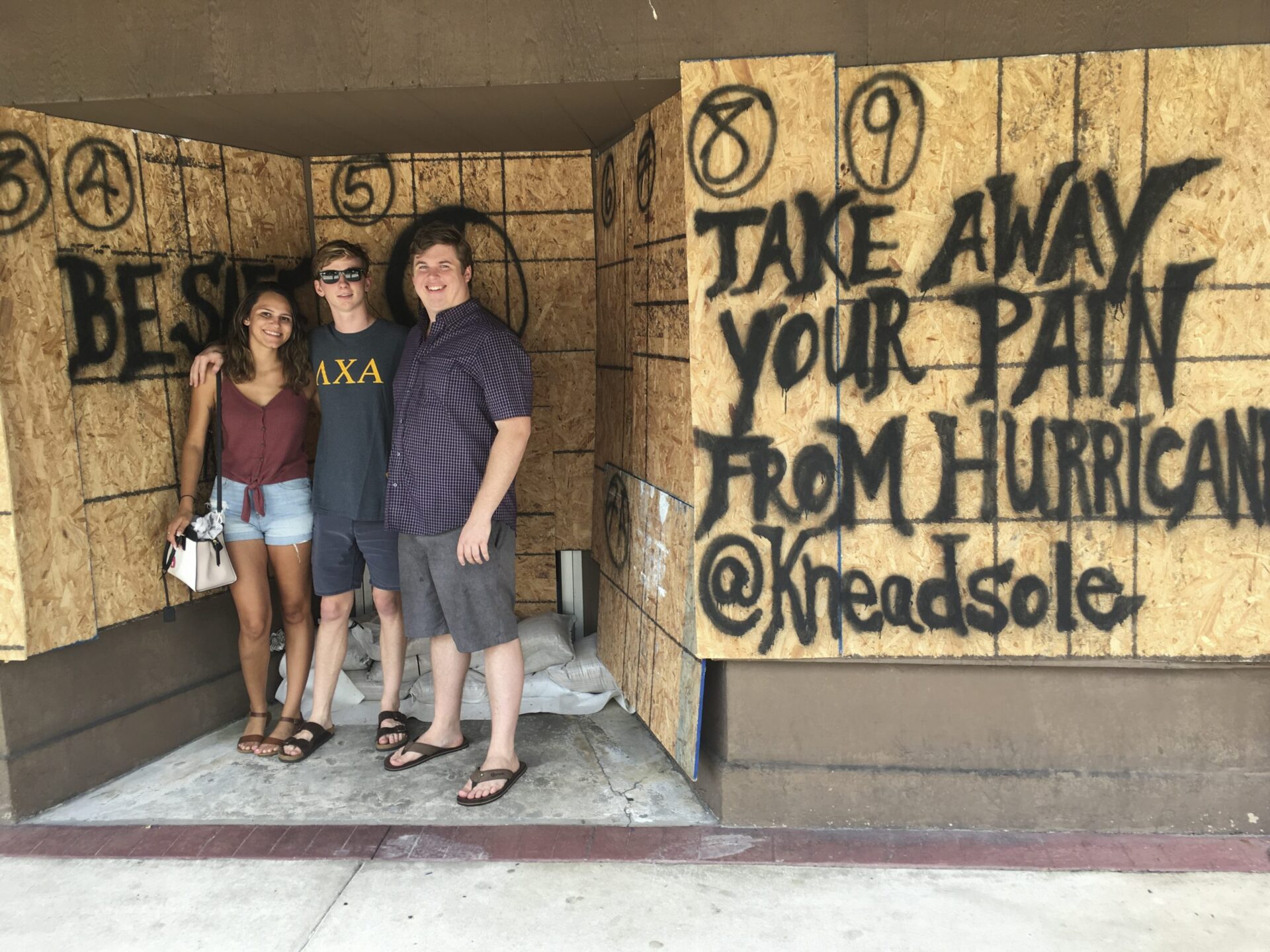 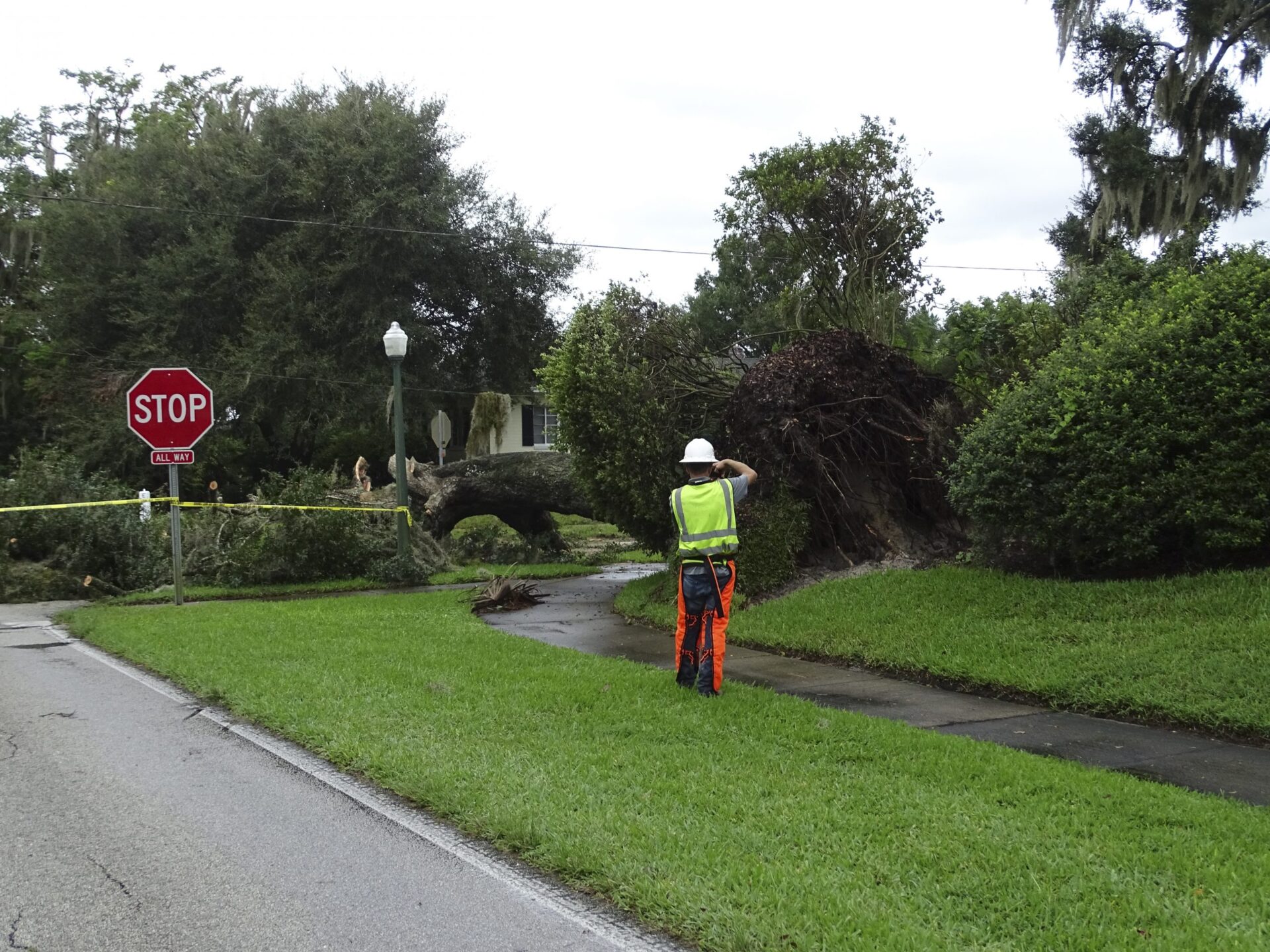 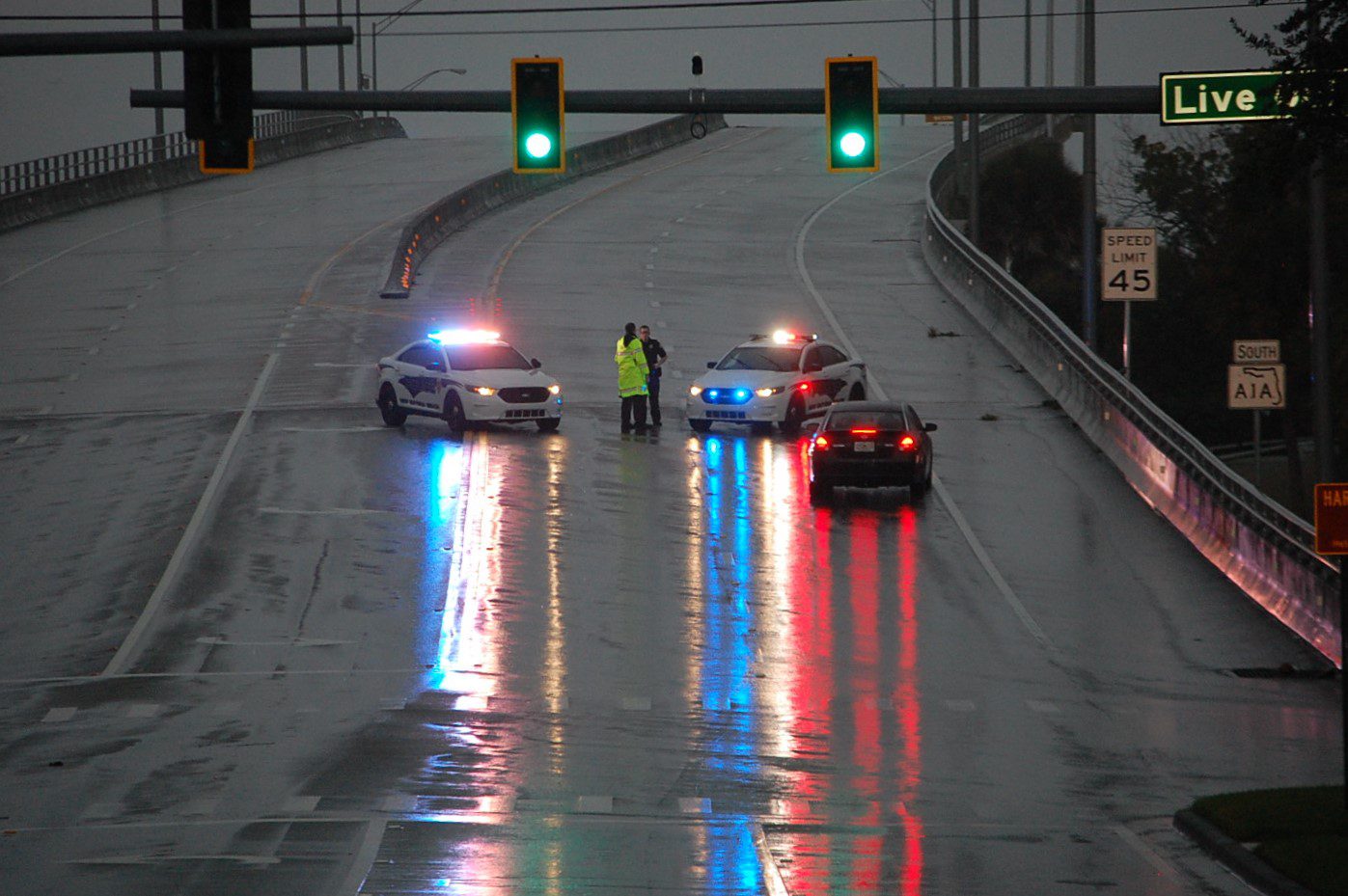 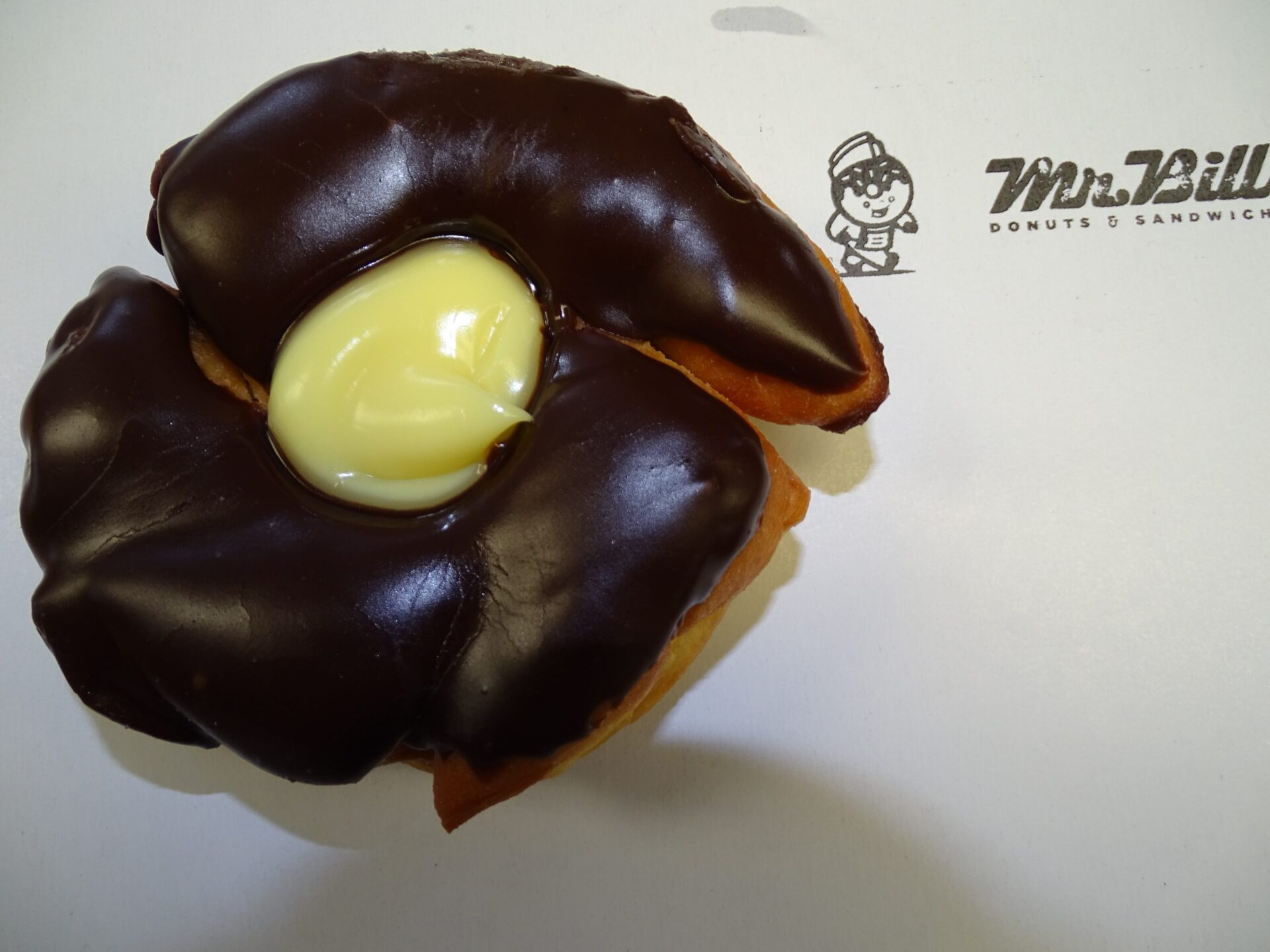 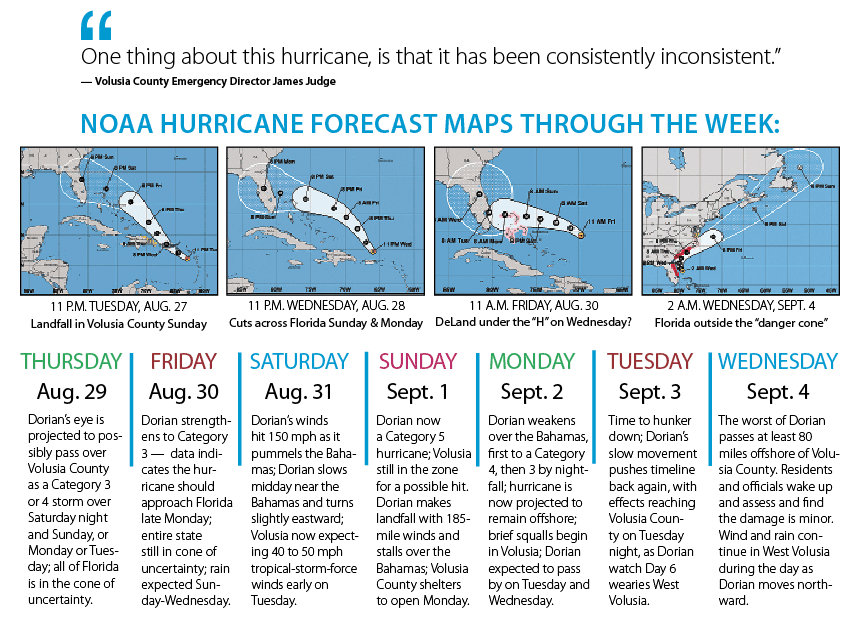 Hurricane Dorian — while mild in West Volusia in terms of rain and wind — imposed hardships of a much different sort on local business owners.

Tammy Mauldin, executive director of the DeLand Area Chamber of Commerce & Orange City Alliance, said they were pleased when the projected path of Dorian shifted eastward.

“While we will not receive a direct hit, we do realize the impact that has been made in the West Volusia area,” Mauldin said. “Many local businesses lay in wait, while many workers have lost wages, and colleges and universities, as well as local schools, are closed. The economy will certainly feel the effects for months to come.”

That echoed what Wayne Carter, executive director of the MainStreet DeLand Association, said earlier in the day.

“The storm has hurt Downtown,” he said. “It takes a week to get ready, and then this particular storm took a long time to come. Merchants are missing the equivalent of a couple of weeks of sales.”

Carter complimented Downtown merchants for being as prepared as they were.

“We just hope that when the storm passes, people will come back Downtown and support the merchants,” he said.

In fact, Desiree Freeland, the association’s events and promotions coordinator, pointed out that the big chain stores will more easily survive whatever happens with Dorian.

“As we move through this storm and come out the other side, please remember to keep your local, mom and pop, family-owned and -operated shops, cafés, pubs and restaurants in mind,” Freeland posted on Facebook. “These small downtown retailers and communities will need your support more than ever, as regular business hours were likely impacted and what would have normally been a shopping holiday to boost their 3rd & 4th quarter earning potential was wiped out.”

That was borne out when The West Volusia Beacon did a spot survey of a variety of types of businesses.

For instance, Lake Helen-based Hopton Roofing, which has been in business since 1973, had to postpone some projects that had been scheduled for this week while the staff prepared for the storm and its aftermath, said Eric Hopton.

“Yeah, there’s nothing going on this week. It’s all been pretty much shot,” Hopton told The Beacon.

He’s not sure if he’ll be able to handle much post-Dorian work, like storm repairs.

“We’re busy enough right now and not looking for additional work,” he said.

BakeChop restaurant at 110 S. Artisan Alley closed for two days, planning to reopen Thursday. But, of course, that was two days of lost income for the eatery.

Co-owner Stevie Vermillion said she and her partner lined up a refrigerated truck from a family member in which they could store their food in the event of a power outage.

“We’re not sure of implementing it because there’s not much of a need,” Vermillion said Tuesday afternoon.

Since Hurricane Dorian seemed ready to spare West Volusia much of its fury, BakeChop has been organizing a small drive to provide help to the Bahamas.

“We told customers they could bring unused hurricane supplies to the restaurant on Wednesday and Thursday, and we’ll give them to a guy in Rotary who will take them to the Bahamas on Friday,” she said.

Although BakeChop will be closed Wednesday, Vermillion said someone will be at the restaurant to accept any donations brought in.

Realtor Beth P. Weinbrenner, whose office is in Victoria Park, said the storm put a damper on her activities. Two potential homebuyers wanting to look for homes had to delay that search.

“It delays my ability to do what I need to do,” Weinbrenner said Tuesday. “I closed my doors today, and I’ll probably be closed Wednesday, too, but my information is posted on the door if somebody needs to reach me.”

Weinbrenner said she wasn’t concerned about power outages, since all utilities are underground in the business park. But she was concerned about the large plate-glass windows of her office.

“For the ‘fall’ days, when Dorian was expected to hit the area — Friday, Saturday, Sunday and Monday — we were booked up and sold out,” Klemm said. “But for the surrounding days, it killed all of our business. It stalled everything for the last two weeks.”

And while the hotel lost money from this storm, Klemm expects the Courtyard to do well if future storms head this way.

“People will want to take shelter here,” he said.

The news was much better for at least one category of business — beer and wine bars.

Bill Budzinski, owner of The Elusive Grape on North Woodland Boulevard, opened Tuesday afternoon after being closed for Labor Day the day before.

“We’re packed,” he said midafternoon. “I just wish we could have been open yesterday, but I had given the employees the day off.”

Budzinski closed at 5 p.m. Tuesday to allow his server to get home safely to the east side of the county. But he planned to be open regular hours on Wednesday on the assumption that nothing would happen weatherwise to prevent it.

Robbie Carelli, who with Andy Sistrunk co-owns Persimmon Hollow Brewing Co. on West Georgia Avenue in DeLand, had planned to close the establishment Sunday night. But so many customers showed up, that couldn’t happen.

“All you have to do is open and people will want to drink,” Carelli said. “It’s amazing.”

Persimmon Hollow was open regular hours Monday, as well, but Carelli and Sistrunk planned to close at 6 p.m. Tuesday, and remain closed on Wednesday “unless there’s some kind of drastic shift moving tropical storm winds out of the area.”

Even once Hurricane Dorian proceeds north in the Atlantic Ocean, there will still be effects felt in West Volusia. But officials are confident the community will pull through.

“Many stories have been shared about the community support and camaraderie shared among the Volusia County neighbors and friends,” said Chamber Executive Director Mauldin. “We will convey any news in the coming days of how we can assist in a recovery while we hope for the best outcome.”

“As it is always true, you don’t have to spend a million dollars downtown, but with every $5, $10 or $20 purchase/coffee/lunch/dinner, you’re doing your part in keeping them alive, in keeping our amazing downtown alive,” she wrote.