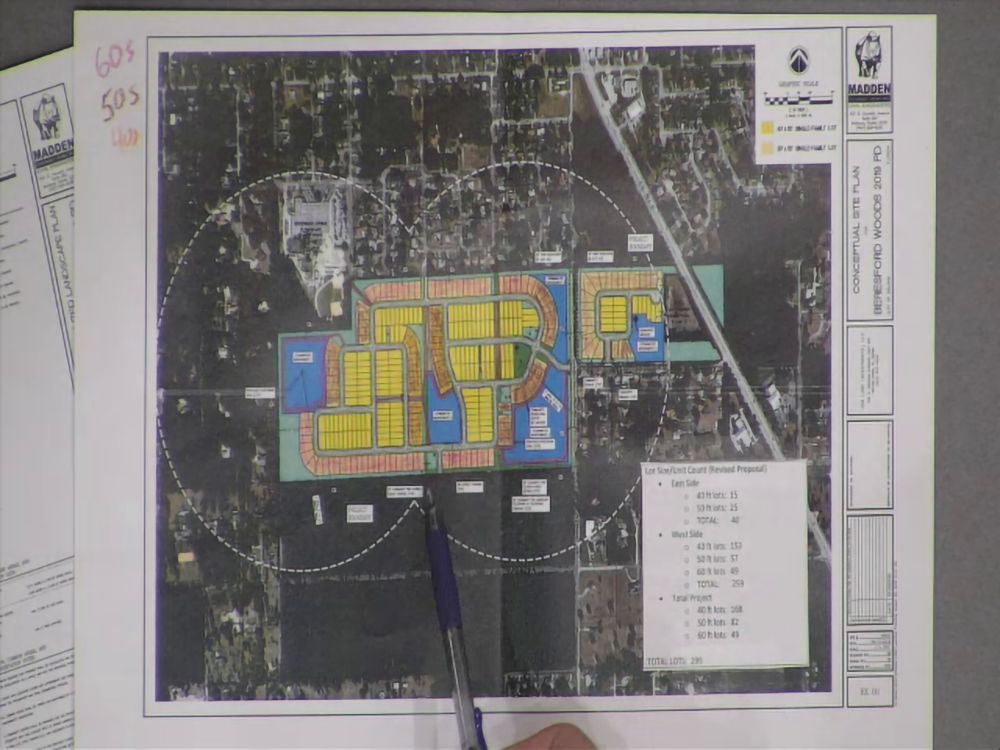 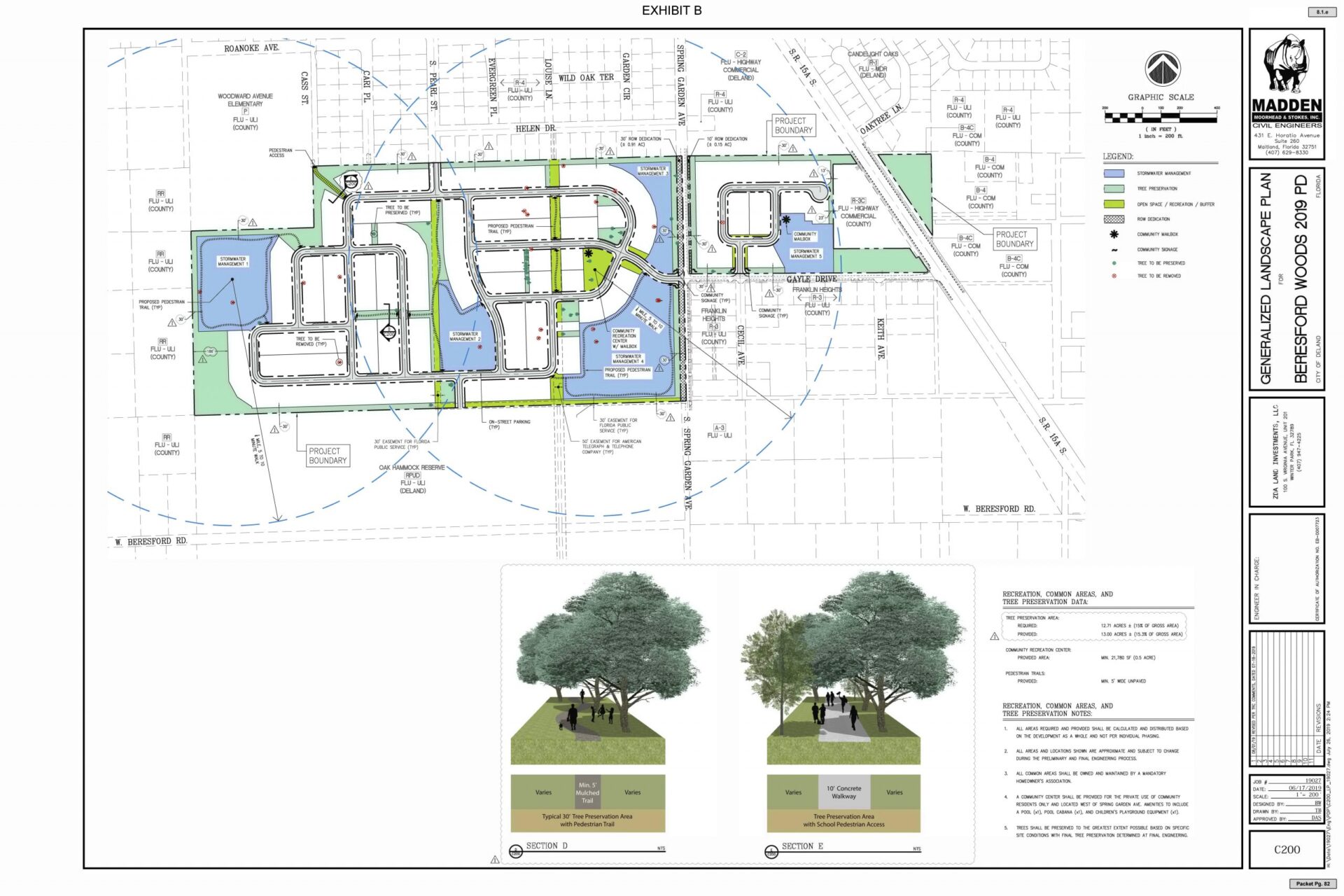 Nearly 300 new homes could soon be built in southwestern DeLand, just across the truck route from the city’s sometimes-troubled Spring Hill neighborhood.

With some caveats, city commissioners unanimously gave preliminary approval to rezone the land on which the proposed Beresford Woods planned development is slated to be built.

The land partially straddles State Road 15A, with a small piece of land east of the artery slated to be used as a tree-preservation area. The western end of the project abuts Woodward Avenue Elementary School.

The City Commission had previously approved a planned development on the site in 2006, with up to 288 lots, but it was never built due to the Great Recession.

The city’s Planning Board, which reviews zoning and land-use changes before projects make it to the City Commission, recommended the city deny the rezoning request for Beresford Woods, for a number of reasons.

“The Planning Board, they recommended denial of this, and they had some concerns,” said DeLand Planning Director Mike Holmes. “But [city staff] did provide some guidance as to things we think they could do to garner approval by staff, anyway.”

Some of the concerns from the city’s planning staff revolved around a desire for the subdivision to have more variety in lot sizes.

“That’s something that no one had a real good handle on, about how to diversify them,” Holmes said. “We wanted to see if they would have more than 40- or 50-foot-wide lots.”

Michael Woods, an attorney with Cobb Cole representing the developer, was equally confused about what the city wanted to see.

“Quite frankly, even going into this hearing tonight, we don’t know what mixture of lots this commission is ultimately looking for and is comfortable with,” he said.

In recent months, the DeLand City Commission has had to grapple with a number of proposed developments, nearly all of which propose to build homes on 40- to 50-foot-wide lots.

While the city has adopted standards for small-lot subdivisions, which regulate things like parking, developers and planning staff alike are unclear about how many small lots in a given subdivision are too many for the City Commission to stomach.

“We waited to hear for small-lot standards and applied them, and did come in solely with 40s and 50s,” Woods said. “Along the way, we were getting comments from staff and we were hearing grumbling from the commission and Planning Board on other projects, [and thought] that maybe we need to have a mix beyond the 40s and 50s.”

There was much discussion about how access to the subdivision would be provided, as well.

As proposed, the main entry and exit for the neighborhood would be through an intersection at South Spring Garden Avenue — which branches off of State Road 15A at the Beresford Avenue intersection — and Gayle Drive, which runs east to State Road 15A itself.

The neighborhood would also have vehicular access to the south, into a yet-to-be-built subdivision adjacent to it.

Those living around the proposed subdivision say there are already problems with traffic and speeding along South Spring Garden and neighboring residential streets.

“If you’ve ever tried to get out of the intersection of Beresford and South Spring Garden Avenue during school days, today, it’s almost impossible,” said John MacDonald, who lives near the proposed neighborhood. “You put 4,600 new trips a day on that street, [and] it’s going to be really bad.”

“This is actually, if you look at it, is a transition area,” she said. “All the lots around there, the smallest one under the county zoning is at 75 feet.”

About a half-dozen residents in the affected area came out to speak against the proposed development.

DeLand Mayor Bob Apgar acknowledged that many of the surrounding lots are at least 10,000 square feet in area, but noted that the older neighborhoods surrounding the proposed development don’t make provisions for stormwater retention, natural buffers or amenities.

“That’s not a criticism, that’s just a simple fact that it’s a pretty graphic example of old 1960-1970 development, versus more modern standards,” he said.

Commissioner Chris Cloudman echoed some of Apgar’s concerns, and said the city’s somewhat ambiguous stance on new development makes it tough for builders and existing residents to have clarity.

“I think this is part of an overall issue that we’re experiencing in the city right now, that we keep talking about how we have a 2050 plan, and we said, ‘Here’s where we should put growth,’ but we keep then kind of wavering on that every time a project comes,” he said. “I think we need to decide as a commission what we really want, or what we’re willing to stomach in growth, and stick to that.”

DeLand developed a 2050 Vision Plan in 2009 and 2010, designating several areas around the city for denser development. The city is in the process of updating its plan, as it does every 10 years.

Apgar summarized what the commissioners seemed to want: some of the 40-foot lots being moved to the eastern portion of the property, closer to State Road 15A; that Beresford Woods consist of a relatively even mix of 40-, 50- and 60-foot lots; and that the development not exceed 299 homes.

A majority of commissioners also expressed a desire for more green space in the development, dispersed throughout the neighborhood.

With those conditions, the commission voted unanimously in favor of the rezoning proposal.

The development must have a second reading before the City Commission, tentatively set for the body’s Nov. 18 meeting.