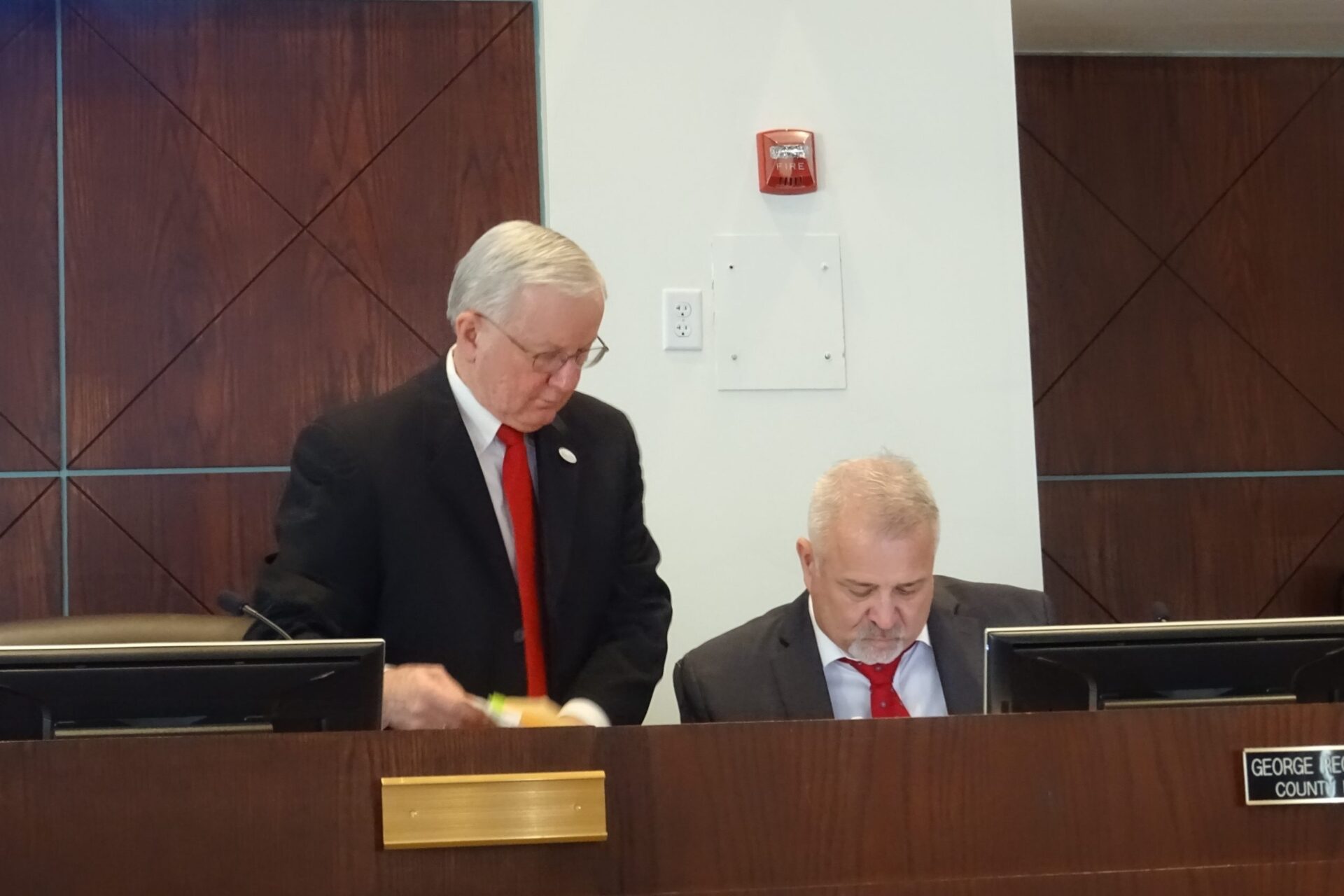 Instead of being evaluated, County Attorney Dan Eckert tendered his resignation, while George Recktenwald finished his first year as county manager with high marks and a pay increase.

Eckert’s decision to step down caught at least some on the County Council by surprise. His pending exit eliminated the need for a formal evaluation.

Rumors of Eckert’s departure circulated on the eve of Dec. 10, the date of the County Council’s only meeting in December.

Conducting performance reviews was one of the last items on the agenda, allowing tension to build for hours during the meeting.

“I resign as county attorney effective January 31, 2020. I deeply appreciate the opportunities to have served,” reads Eckert’s short and to-the-point resignation letter, which was read aloud at the meeting.

Council members considered whether to move up his departure date to the end of December, but in the end accepted Jan. 31 as his last day at work. After some discussion, the council agreed to waive the requirement for senior county employees to give 60 days’ notice.

Now 70, Eckert started working for Volusia County government in 1978. He became county attorney in 1990, upon the retirement of Warren Tiller. Eckert is the highest-paid county employee, with an annual salary of $227,042. He is also eligible to cash out 1,120 hours of accrued personal leave.

Turning to Eckert, Lowry added, “I wish you would change your mind.”

“Dan, I seriously want to thank you for all your service,” Council Member Billie Wheeler said.

Council Member Deborah Denys, by contrast, gave Eckert less-than-high marks. Denys said she had not received legal information she had requested, including about his handling of concerns about driving on a stretch of the beach set aside for sea-turtle protection.

Denys called for the County Council to include, in an upcoming workshop, a discussion about “the purpose of the County Attorney’s Office and how they represent the council.”

Apparently causing friction between Eckert and some members of the County Council were Eckert’s actions regarding the Racing Legends Beach Parade.

The parade is a special event honoring the origins of auto racing on the beach in the early 20th century. The annual event usually takes place during Race Weeks in February, before the Daytona 500, and Eckert had cautioned the County Council against allowing it in the future.

“Since 2012, the county has allowed vehicles on the beach for the Racing Legends Event in an area where, under the ITP, no public vehicular traffic is allowed at any time of the year,” Eckert wrote in a July 23, 2019, letter to Rhonda Glasnak, owner of Racing’s North Turn, a beachside restaurant in Ponce Inlet sponsoring the event. “This allowance by the county has been a mistake, grown larger with time. The county cannot continue to do so.”

The ITP is the Individual Take Permit, a formal agreement with the U.S. Fish and Wildlife Service that provides for the protection of sea turtles and their habitat.

Eckert also wrote that he had “told the county manager that the event should not be permitted in the non-vehicular portion of the beach.”

Permitting cars on the restricted segment of the beach, he concluded, could result in “the ultimate demise of all vehicular access on the beach.”

Council members say the event will go forward in 2020 but, at the urging of Johnson, the county will ask Florida Attorney General Ashley Moody to give her legal opinion about whether beach driving could be jeopardized by allowing the parade to continue.

Almost as an anticlimax, the council turned to evaluating Recktenwald.

“What I love, too, George, is the respect that you’ve gotten out in the community,” Council Member Wheeler told Recktenwald. “You are the change that I want to see.”

Johnson recalled Recktenwald’s movement up through the county hierarchy over the past 22 years, including his ascension to the interim post after County Manager Jim Dinneen resigned last year.

“I think we were fortunate to have a candidate on the inside,” Johnson said. “I think we did the right thing. You don’t always have to go somewhere else to find a professional.”

“You have worked to surround yourself with an excellent leadership team,” Council Member Heather Post said.

The council voted unanimously to grant Recktenwald a 3-percent raise, equal to the rate given to other county employees. Recktenwald’s annual salary now becomes $221,450.

“I want to thank you for your confidence,” he told the council. “We do have a great staff.”