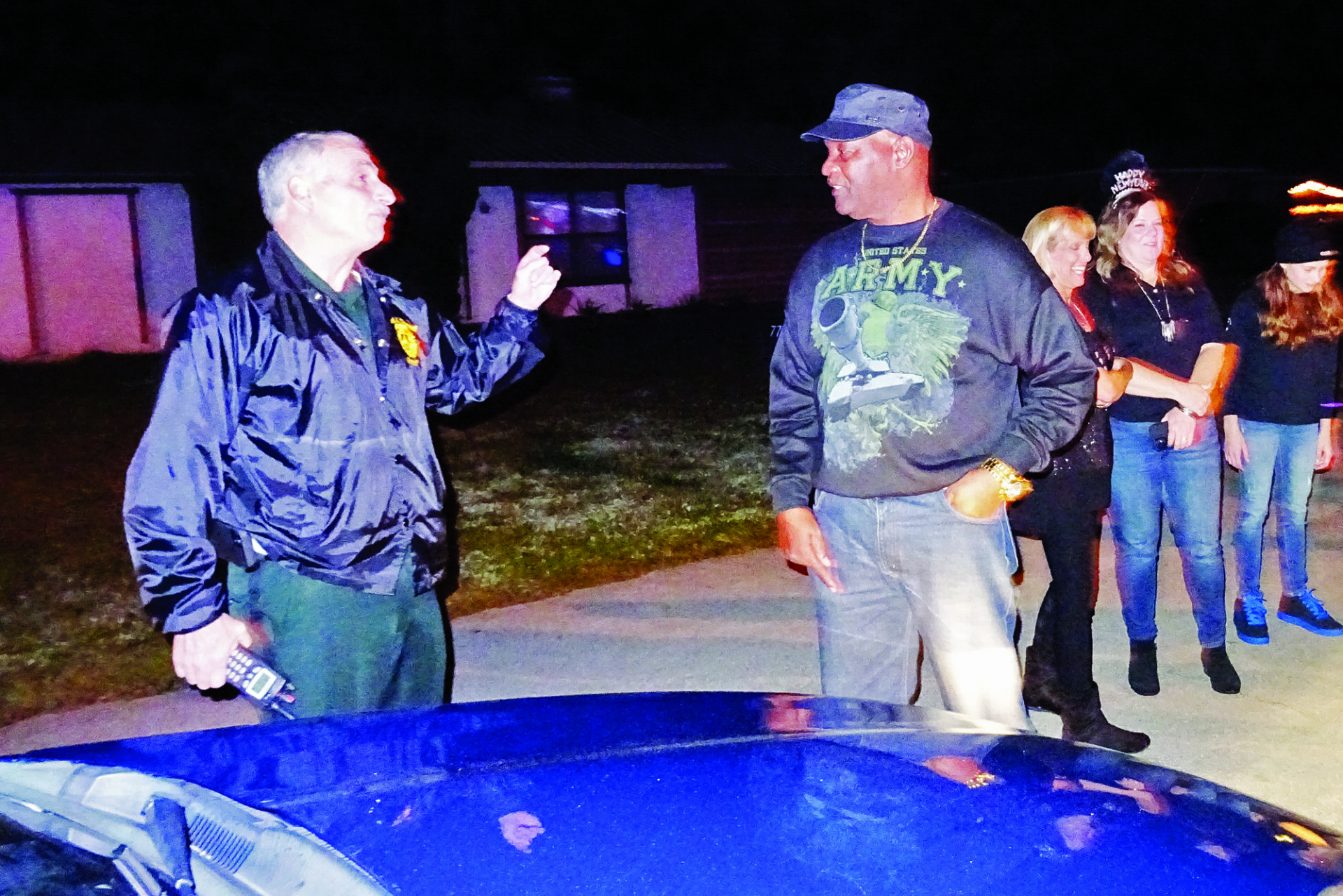 As 2019 gave way to 2020 in Volusia County’s biggest city, the sights and sounds of war — albeit a fun war — commanded attention.

The red glare of rockets and star shells bursting in air, along with Roman candles, firecrackers and sparklers, put the acrid scent of gunpowder into the atmosphere on New Year’s Eve.

Who knows how many Deltonans went into their driveways and streets to detonate celebratory ordnance — even though the city outlaws fireworks?

As members of The Beacon staff have done for the past four New Year’s holidays, we rode with Volusia County Sheriff Mike Chitwood as he went on patrol to ensure law and order prevailed in Deltona as Dec. 31 became Jan. 1.

Deltona was only one stop in the sheriff’s holiday-patrol schedule, which began on the county’s east side and progressed westward.

“You don’t use the Q word,” Chitwood told Mayor Heidi Herzberg, who rode with him in the front seat of his unmarked car, with a Beacon staffer in the back.

The Q word, in this case, is “quiet.” It was not going to be as quiet or tranquil as Chitwood and others might wish.

In two hours spent riding with the sheriff, the emergency-dispatch scanner in the car reported domestic disturbances, car break-ins, a burglary in progress in DeBary, noisy New Year’s parties and, of course, fireworks complaints.

A few youngsters even had the audacity to set off pyrotechnics within a few yards of the Deltona substation of the Sheriff’s Office on Providence Boulevard.

Driving along East Chapel Drive, we saw dozens of cars parked on the street, in driveways and on lawns.

“There are three huge house parties,” Chitwood radioed to dispatchers and deputies on the move.

There was a touch of humor in the radio traffic, as a dispatcher related a 911 caller’s report of a man in green pants carrying a flashlight walking from car to car in a parking lot. The suspicious person, it turned out, was a deputy checking possible auto burglaries.

As the skies in every direction lit up with colorful explosions, deputies scrambled to find those staging neighborhood fireworks displays. When residents were caught lighting off fireworks, the deputies handed out flyers and warned the boom-makers to stop what they were doing.

Sheriff Chitwood enhanced his admonition to one group of young adults.

“I don’t have time to play! If I have to come here again, somebody’s getting locked up, and I’m confiscating the fireworks!” he told the celebrants, as blue lights flashed.

From there, we meandered to central Deltona, riding southward along Providence Boulevard and crossing East Normandy Boulevard. Fireworks were going aloft on a side street close by, and Chitwood turned toward the scene.

As the car moved slowly along the street toward a group of people welcoming in 2020, one of the younger ones stepped out of the center of the street and — unaware of who was in the car — waved courteously to usher us along through the debris of spent fireworks.

Chitwood stopped the car and got out, surprising the partygoers as he introduced himself. He really needed no introduction, as he was readily recognized. The older ones in the group clutched their bottles of beer, while the juveniles watched.

This was no ordinary group of celebrating Deltonans, however. At least five police officers were present — and they were enjoying the fireworks that are illegal to sell or use inside Deltona city limits!

The officers, who live in Deltona, said they work for the Orlando, Maitland and University of Central Florida police departments.

“Hey — you know why I live here? Because of this man!” an officer told us, expressing his support for Chitwood.

The sheriff was clearly among friends.

In what seemed like a fraternal or collegial gathering, Chitwood advised them to stop shooting off fireworks. One partygoer offered him a beer, which he politely declined.

“I’m working,” he replied to the hospitable host, before getting back into the car and driving away.

Alcohol was no jovial matter elsewhere. Deltona’s deputies logged at least three arrests for drunken driving. In one instance, deputies stopped a speeding car on Providence Boulevard in front of City Hall.

The vehicle had been going 64 miles per hour in a 35 mph zone, Chitwood learned during a brief stop at the substation. The driver, deputies told Chitwood, had a blood-alcohol reading of 0.164 — more than double the legal limit of 0.08.

No less serious was the arrest of a Deltona juvenile in DeLand, Chitwood also found out. Deputies stopped the 17-year-old girl traveling at 71 mph on State Road 15A, with a blood-alcohol level of 0.10 — still above the legal limit.

Yet another intoxicated motorist was stopped on State Road 415, Chitwood said.

As if to reinforce the danger of fireworks, deputies and emergency medics had to respond to a serious injury. A Deltonan lost most of his left hand in a premature explosion Dec. 28.

New Year’s Eve in Deltona was not tranquil or placid, but it was not as tragic and deadly as Christmas Eve exactly a week earlier.

The investigation continues into the deputy-involved fatal Christmas Eve shooting of Harvey Cantrell, 65, at his home on Gaucho Circle, after he shot his sister in her shoulder as she was leaving the house to seek the safety of deputies who had surrounded the home.

The sister survived the shooting.