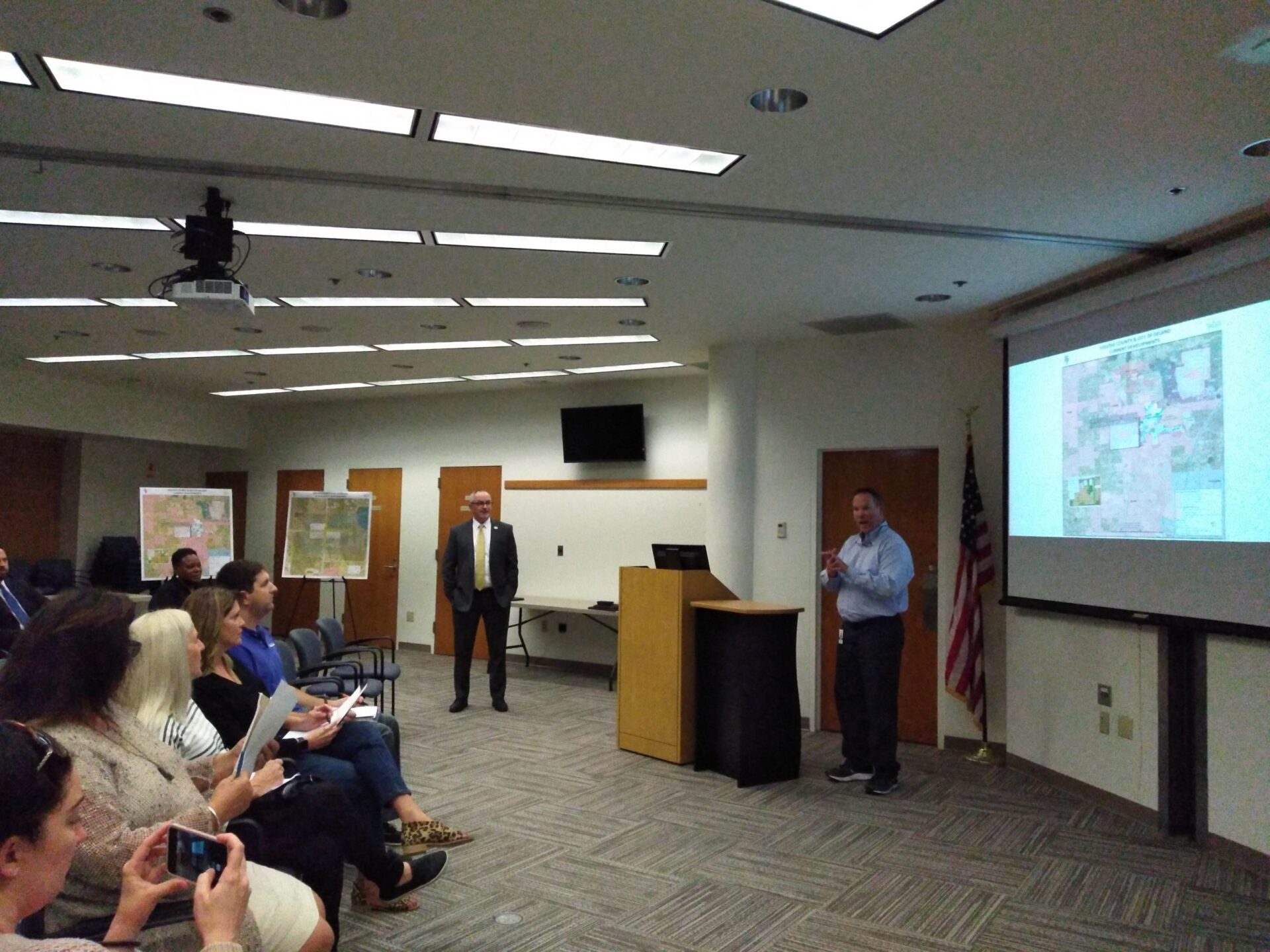 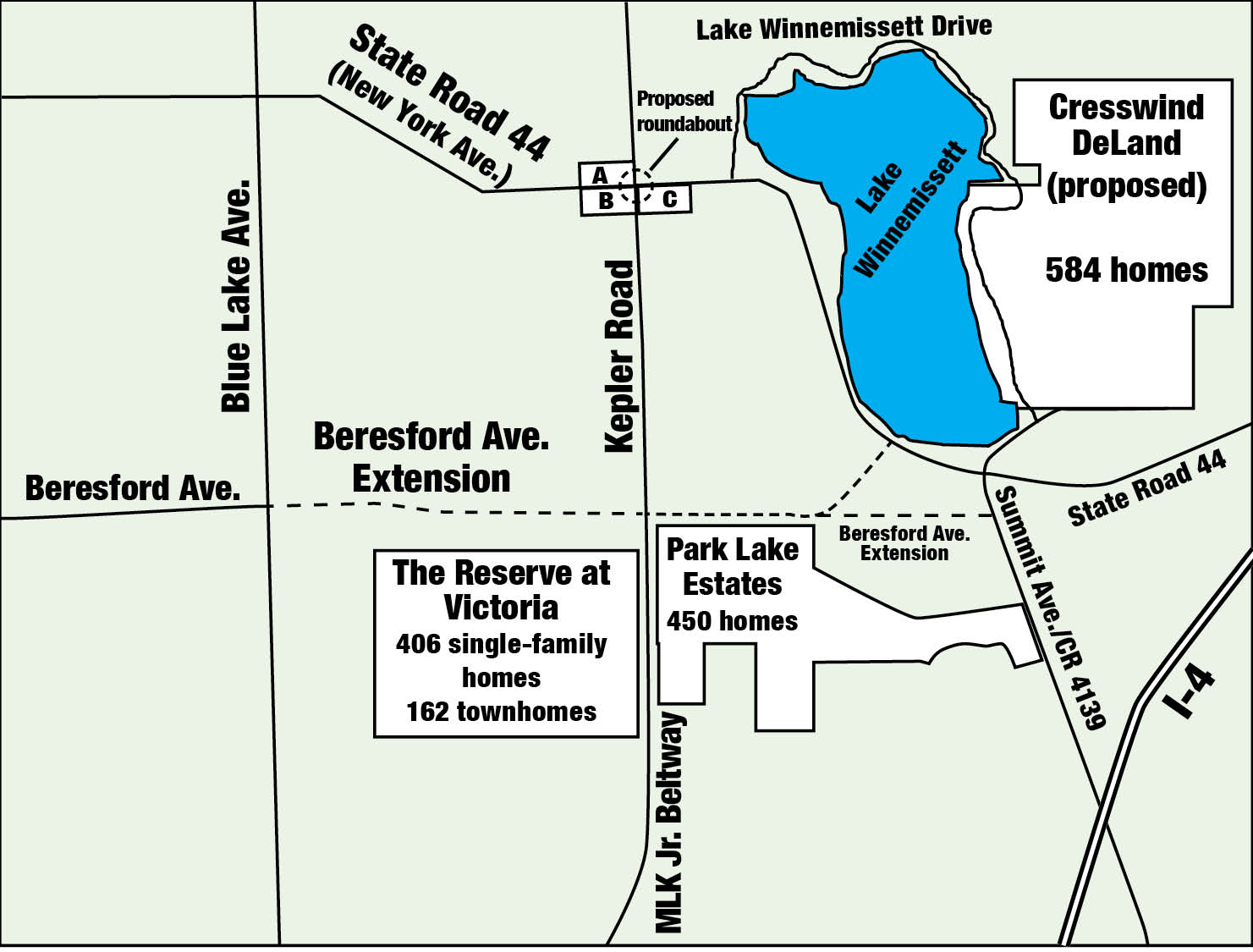 Many people living on and around the shores of Lake Winnemissett are feeling suffocated by new development in nearly all directions around them, and by traffic problems DeLand’s growth has created.

The joint city-county meeting was called to inform residents about pending development in eastern DeLand and — if less imminently — planned road improvements in their vicinity.

“We are not here to whine and complain about development, even though we have some concerns with it,” said Joan Lee, a member of the association’s board. “We wanted to have this meeting as a collaborative and proactive measure to try to plan for the future and [to see] what we can do about the traffic and safety concerns that we’re having … which we anticipate will be compounded by the future developments that are being planned.”

A key concern was traffic backups around the intersection of Kepler Road and State Road 44, and speeding through the curves on the state road and even on Lake Winnemissett Drive.

The collaborative meeting was arranged after Lake Winnemissett residents reached out to Volusia County Council Member Barb Girtman, who represents the DeLand-area District 1.

At the meeting in a training room in the Downtown DeLand county-administration center, easels held large maps showing development coming on nearly all sides of the lake.

According to those maps, 2,021 new single-family homes and 162 townhomes are in some various stages of development around the lake and in southeastern DeLand.

The plans at the intersection — already the bane of many a commuter — worry planners and residents alike.

“Anyone who drives in in the morning [and] anyone who’s trying to get out in the morning understands that that is a giant logjam,” Clay Ervin, director of growth and resource management for Volusia County, said.

Ervin, along with Jon Cheney, the county’s director of traffic engineering, went over some of the road improvements planned in the area.

“We are very aware of the concerns of the residents, as well as those who travel on the roads, of the traffic that may result from the intensification of development,” Ervin said.

A $10 million project to put a roundabout at the corner of Kepler Road and State Road 44 is in the design phase, but county officials said the Florida Department of Transportation hasn’t designated a funding source for the project.

“What we’re waiting for, candidly, is DOT to finalize the design and put the funding in place,” Ervin said. “Right now they have not dedicated a funding source for that yet.”

The county has also required the developments proposed at the intersection to dedicate some land for the right of way required by the roundabout.

Like nearly every jurisdiction in the country, Volusia County and the state have struggled to find sources of adequate funding for transportation.

“I’m going to tell you that funding for transportation is one of the critical problems, and it’s not unique to us,” Ervin said. “This is something that’s happening across the nation, to try and find the funding for our infrastructure, just to maintain it, let alone expand it.”

Some residents at the meeting suggested smaller improvements that could make the roads safer, like adding flashing warning signs near the treacherous portion of State Road 44 as it curves around the lake’s south and west shores.

“People are using Lake Winnemissett Drive as an alternate route to avoid the traffic on New York Avenue,” said resident Lee. It’s hard for people to walk and ride bikes. It’s definitely a safety concern; there are no sidewalks.”

A sidewalk would be difficult to add to the winding residential road, as there isn’t enough buildable right of way to build one. All property owners along the road would have to dedicate an easement to the county to make enough room for a sidewalk.

Another suggestion was the addition of a radar-equipped speed limit sign along Lake Winnemissett Drive, which would tell drivers their speed and would flash if they’re speeding. A similar sign exists on North Stone Street across from Bill Dreggors Park in DeLand.

At the end of the meeting, the county agreed to continue working with the residents to see if some of their suggestions could be cost-effectively implemented.

John Engle, who lives on State Road 44 near Lake Winnemissett, characterized the meeting as the beginning of a conversation, not the end of one.

“I think it’s just the start of a conversation to put together a long-term plan,” Engle said. “We want to be the facilitators, the drivers, of the ultimate solution to the systemic problems, and maybe get some band-aids along the way for some of our little more localized issues.”