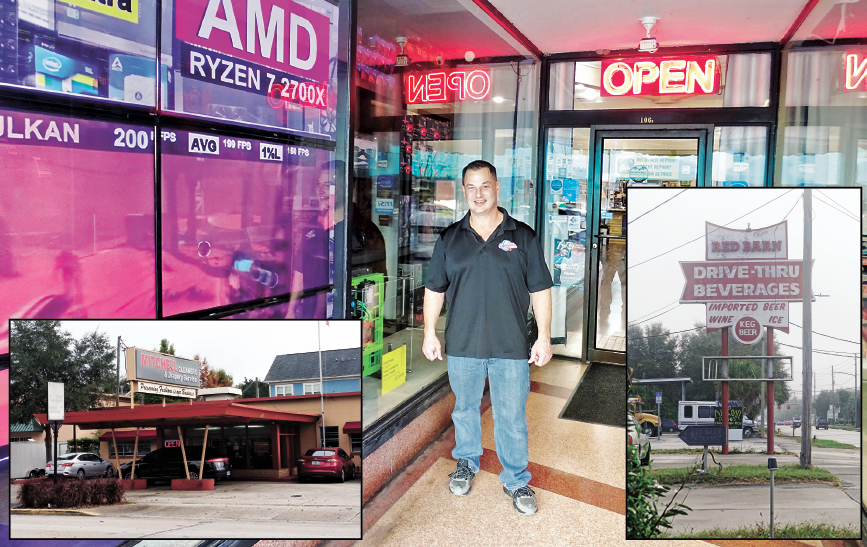 Protests about the City of DeLand’s sign rules have been heard — but changing the law will likely take months, as the city works to determine what the public, and the City Commission, want.

The willingness to make adjustments means the owner of a Downtown DeLand computer store that sports a dazzling — if technically illegal — modern window display may get some relief, despite a negative ruling from a city special magistrate.

Martineau said he was told to remove the display by March 26, or to face fines of $250 per day. He won’t actually have to do so, however — for now, at least.

The city is withholding action on the decision, while its planning staff explore possible updates to the city’s sign code, which could allow Martineau to keep the display, at least in some form.

Such a discussion will likely take months, according to DeLand Community Development Director Rick Werbiskis.

The process for crafting revisions to the code still hasn’t been completely laid out, but it will include workshops where business owners and members of the public will be able to give input and voice their concerns.

“We haven’t formulated the entire process. I’m going to be meeting with the city manager and the city attorney on Friday to iron out the details,” Werbiskis said Tuesday. “… I envision that we will hold a workshop or two with the business community to also get their feedback, and then we’ll be proposing something to the Planning Board.”

The actual text of the revisions will be drawn up by the city’s planning staff, with the assistance of City Attorney Darren Elkind, after taking public input into account.

“We certainly can’t operate in a vacuum here,” Werbiskis said. “We need to get the input of the business community and the residents in order to fully undo what the issues are and how to address them.”

While the exact substance of the changes to the sign code won’t be known until after the city goes through the process, Werbiskis said it’s certainly possible Wholesale Computer’s display could be permitted under a revised code.

“There’s been some changes in the laws over the years, and also, as you’ve probably seen, technology, and the general perception of signage, so we need to bring the ordinance up to date,” he said.

Much depends on input from the public — and, ultimately, on what the DeLand City Commission thinks of any proposed changes.

“The community character has to be reflected,” Werbiskis noted.

Martineau argues that the display, which shows a variety of video clips throughout the day including the shop’s logo, video-game footage, and scenes from nature shows, is a reflection of the kinds of high-tech products sold in his store.

He calls it a product display, rather than a sign; in fact, the whole system, including the computer driving the nine screens, can be purchased for $10,000.

Martineau called the city’s move “a step in the right direction.”

Ultimately, he wants to see the city’s code evolve, just as technology does.

“It’s something that the city really needs to consider, because technology’s always changing, and we’re either going to be up to date with it, or we’re going to be behind the eight ball,” Martineau said.

DeLand, particularly in the Downtown area, currently has relatively strict rules governing signs, which has caused some consternation with business owners around the city.

According to city code, the signs generally need to be made only of “wood or other appropriate material that is compatible with the historic character of the building,” and their colors must be approved by the city’s Historic Preservation Board.

“Internally lighted signs” are also prohibited, though a sign may be lit up through other means. Animated electronic signs are prohibited throughout the city — not just in Downtown DeLand.

While signs located inside a window which take up less than a quarter of a merchant’s window space are typically exempt from the city’s sign code, they aren’t exempt in the Downtown area.