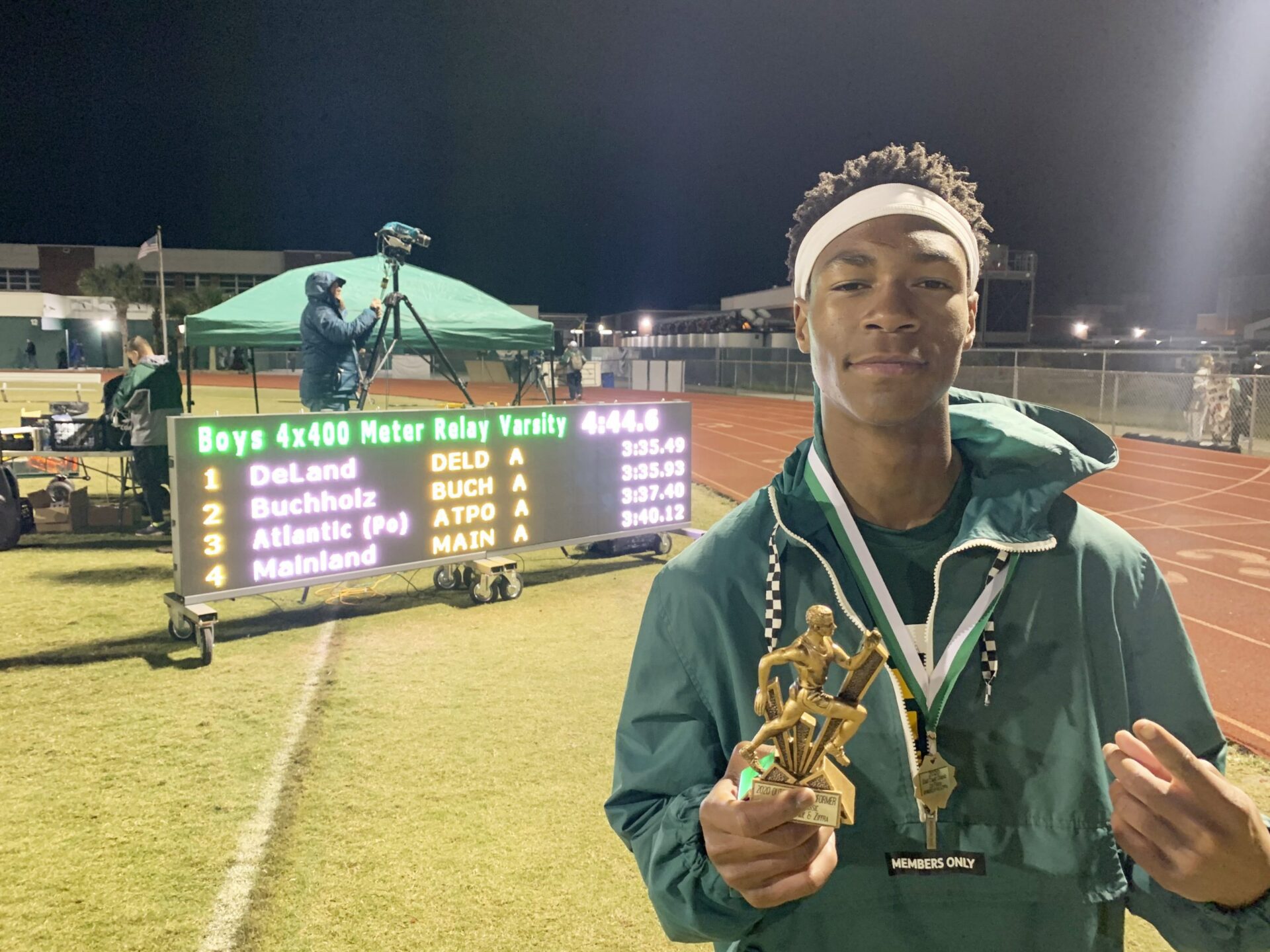 Kevar Williams, only a sophomore at DeLand High School, ran one of the fastest 400-meter races of the year in Florida Feb. 28 at the East Coast Classic sponsored by Flagler Palm Coast High School.

Williams ran the one-lap race in 48.49 seconds, eclipsing two old marks for the DHS boys’ track program. Robert Walker ran the race in 49.3 seconds in 1996, and K.O. Taylor set the 440-yard record at 49.0 in 1968, when he won the Florida High School Athletic Association state championship.

Williams’ night did not end with the record, as he also placed first in the 200 meters with a time of 22.19, and ran the anchor leg of the 4X400 relays to first place. After being passed on the back straightaway, Williams swung off the curve onto the final straightaway to cement the victory for the Bulldogs. He was named “Outstanding Male Athlete” of the meet.

The boys’ team took second overall out of 17 teams, with 104 points, 29 behind the host school. Spruce Creek was fourth, while Mainland was sixth.

In the girls’ competition, Spruce Creek was first with 157 points, while Mainland was second with 112.5, followed by Flagler Palm Coast and by DeLand in fourth place. Teams participating hailed from Jacksonville to Gainesville to Central Florida.

The DeLand squads earned six first-place finishes, four for the boys and two for the girls, while the two squads picked up six second-places and another six spots in third place.

Two of the wins for the boys came from the work of Williams, while a third had Williams running with Abraham Fuentes, Qua-Wayne Harris and Raziel Smith to claim first place in the 4X400 relay at 3:35.49. Smith earned the other first for the boys’ team, by winning the 110-meter high hurdles at 16.01.

The two firsts for the Lady Bulldogs were earned by Jordan Singletary in the 100 low hurdles with a time of 16.06, while Jaylin Hastings threw the shot put 37 feet,10 inches to win that event.

The boys found Fuentes taking second in the 200, Smith in the 300 hurdles and the team of Caleb Roberts, Dillon Wilson-Beck, Ethan Myrick and James Gannon gaining second in the distance medley relay.

The third-place finishes were recorded by Gannon, Ben Knox in two events and Jackson Schrier. Third-place honors went to Alize Munn and Jiya Hastings for the Lady Bulldogs.

The DeLand team will be playing host to one of the more popular meets in the area at the “Big D” Relays on Saturday, March 7, on the newly resurfaced DeLand High School track. Field events begin at 10 a.m., while running begins at noon with the ever-popular shuttle-hurdle relay.