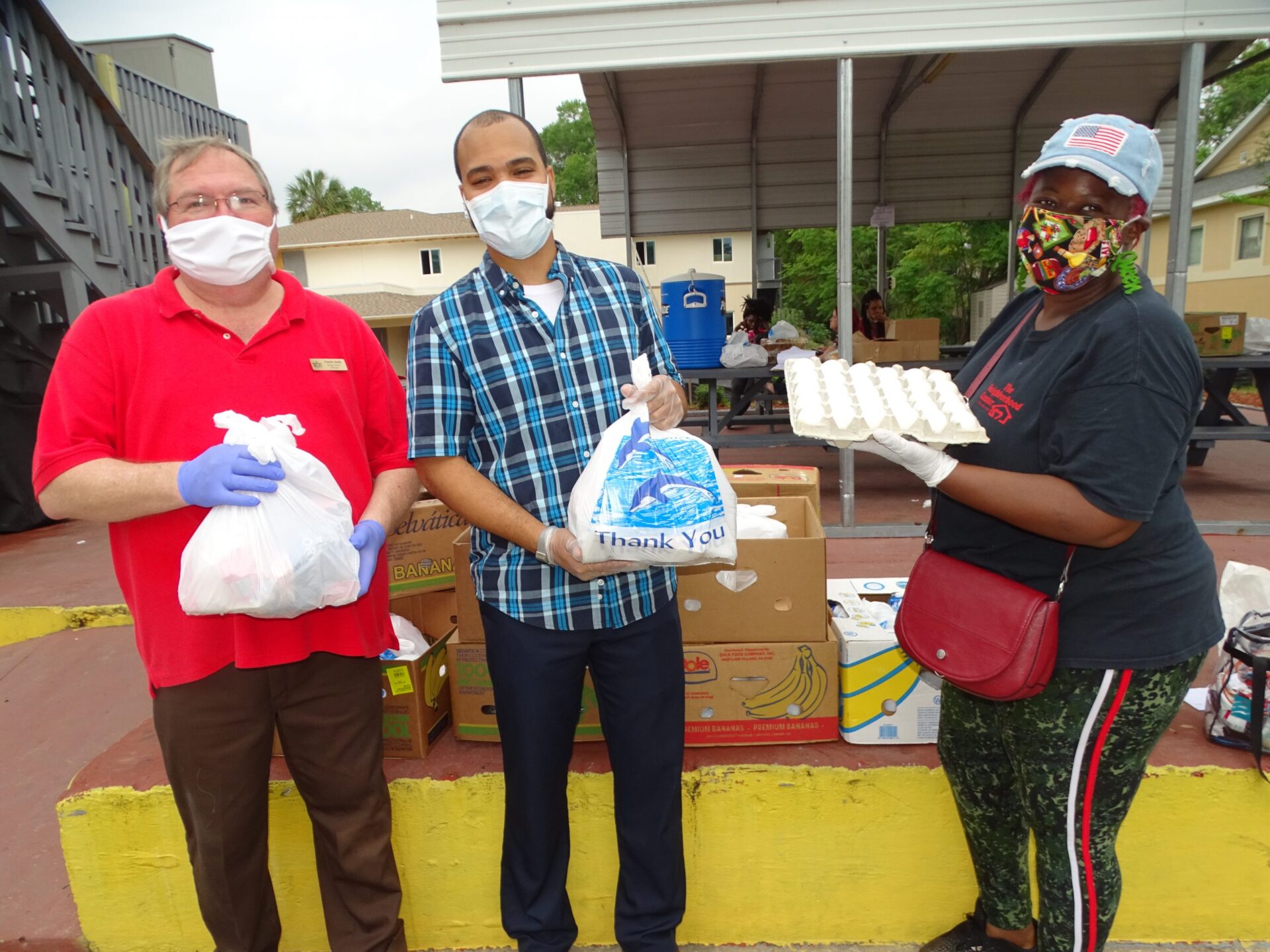 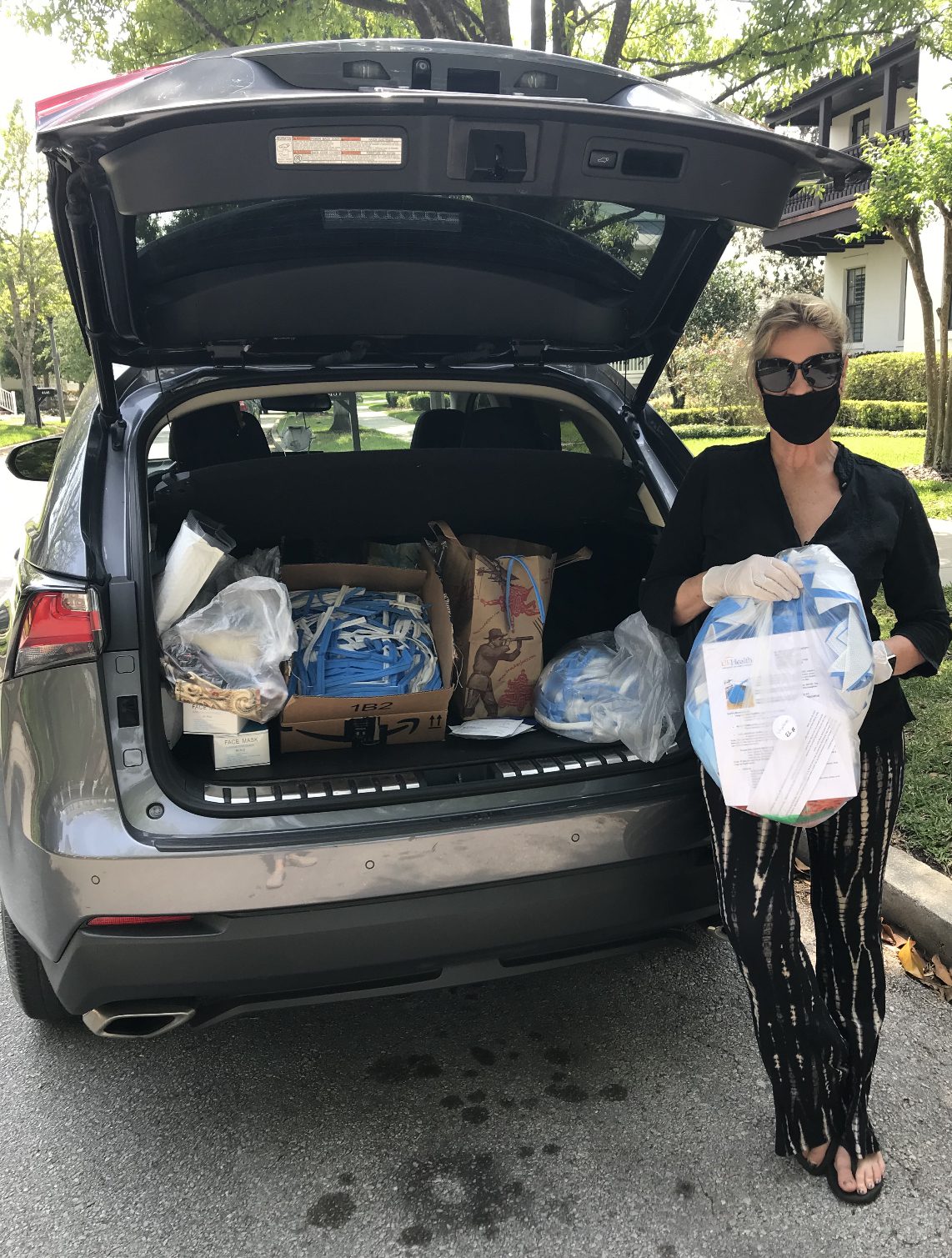 From feeding the poor to keeping up the spirits of isolated neighbors, area residents are responding to the COVID-19 crisis in typical West Volusia fashion: by helping others.

Earlier, we’ve reported on fundraising efforts to help restaurant and bar workers who were suddenly out of work. One such effort, led by Jenneffer and Hari Pulapaka of Cress Restaurant and DeLand philanthropist Judy Thompson, has paid out to food and beverage workers more than $16,000 donated by the community.

This week, Beacon staffers run down a sampling of other ways local people have found to help — including The Beacon’s own introduction of a website where you can safely buy gift certificates to help local businesses through this difficult time.

An army of local “sewists” have made more than 5,000 cloth-and-elastic face masks for nurses, essential workers, and high-risk community members.

Seeing a need, DeLandite Jacquelyn Lewis, with the help of friends and family, began gathering local volunteers to churn out masks via a Facebook group called “Million Mask Challenge – We NEED YOU!”

The group provides patterns, connects people with materials such as elastic, delivers mask-sewing kits, and links those in need to resource providers through an online database.

“[The effort] started here with my mom and her quilt/fiber arts group,” Lewis said in an email. “They’re all in isolation, and [they] have tons of time, talent and fabric.”

The local effort, which Lewis estimates involves around 100 volunteers, has so far sewn more than 5,000 masks, mostly made from cloth and elastic. The masks contain “envelopes” for replaceable filter material.

But even that number doesn’t fill the need, Lewis said.

She said there have been thousands of requests, every day, from nurses, group homes, nursing homes, essential workers such as those at grocery stores, and other high-risk community members.

To that end, Lewis and others struck a deal with Orlando Regional Medical Center to repurpose previously discarded sterile material, like the wrapping that comes around surgical trays, into face masks.

According to University of Florida Health’s anesthesiology department, which came up with the plan, the material may be superior to a common surgical mask and could fill a need in the case of critical shortages. About 10 masks can be made from a single sheet. UF Health runs a cancer center in conjunction with ORMC in Orlando.

Local company Skydive DeLand has offered to laser-cut the material and stitch the siding, Lewis said, although with the material they have available, only hand-cutting is possible at the moment.

According to Lewis, each mask from the hospital material takes about 30 minutes to cut out.

So far, Lewis said, AdventHealth has not participated in the plan, although some AdventHealth employees request and receive masks from the group.

“I am appalled that [governmental] leadership has failed to mask their police, fire and other essential team members along with their family members,” Lewis said in an email. “We need EVERY at-risk individual masked – STAT!”

For more information, visit the Facebook group at www.bit.ly/2K8A7eQ and www.getusppe.org/data.

This is love demonstrated

Staff at a Downtown DeLand bar are using their downtime to make sure some of West Volusia’s most vulnerable remain fed in this trying time.

Budzinski said he also had a customer, who wishes to remain anonymous, donate $3,500 to The Grape so it can continue preparing and distributing meals at the Spring Hill Resource Center.

The Grape’s staff prepared meatloaf dinners that were distributed at the center last week, and Budzinski said this Friday’s meal is roast beef with mashed potatoes and string beans.

He said his staff members are also aiming to distribute several lunches a week at the center. The charitable giving is one way Budzinski is keeping his staff on the payroll during the crisis, he said.

“It’s just a good thing. It gets you out of the monotony of doing nothing, and it feels good to do something good,” he said.

Shilretha Dixon, administrator of the Spring Hill Resource Center, was awed by the donation.

“This is what love is,” she said. “This is love demonstrated in the most amazing of ways.”

DeLandite Richard Hewitt just wanted his neighbors to have a happy Easter.

Hewitt is a resident of The Oaks, a 55-and-over manufactured-home community on DeLand’s east side. He knew his neighbors had been mostly isolated in their homes for weeks, doing their part to stop the spread of COVID-19 in West Volusia.

Retired from the aerospace industry and a magician on the side, Hewitt wanted to create a little neighborly magic.

He enlisted the team at Brian’s B-B-Que Restaurant & Catering, and purchased 4 pounds of baked ham for every household in The Oaks — a little more than 200 households.

The project involved almost 1,000 pounds of ham, restaurant owner Brian Hill said, and a whole lot of carving time and talent on the part of his team at Brian’s Bar-B-Q.

Hill and three staff members from Brian’s set up in the parking lot of The Oaks clubhouse April 11, and helped Hewitt distribute the bounty.

“Right now, everyone is closed up. All my poor neighbors, they’re like prisoners here,” Hewitt said. “I wanted them all to be happy for Easter.”

From comments made by his neighbors at the pickup point, it seemed Hewitt accomplished his mission. Expressions of gratitude abounded, and neighbors seemed to enjoy getting out in the fresh air, if only to quickly pick up a gift from a generous neighbor — while keeping a safe distance.

If our story has made you hungry, Hill advised that Brian’s Bar-B-Q is open 11 a.m.-8 p.m. daily for takeout orders, and has taken the extra step of training its staff to earn certification from the National Restaurant Association for COVID-19 safe takeout — one of the first restaurants in the nation to do so, he said. Call Brian’s at 386-736-8851.

To see menus and ordering instructions from other local restaurants offering takeout, visit The Beacon’s new restaurant website, Volusia Eatabout, at http://menus.beacononlinenews.com/. Check back often; more menus are being added all the time.

Hewitt is far from the only resident of The Oaks thinking of others. In late March, Barb Wilson, who also lives in the community, called to tell The Beacon about her “Take Thyme to Smile” project on Thyme Way in The Oaks.

The street, which residents often walk for exercise, has been decorated with cheery and encouraging messages and exercise suggestions in chalk. And, on March 23, Wilson organized a parade of sorts to lift neighbors’ spirits. She donned a purple wig and played the kazoo.

“At times like these, you’ve got to remember to have fun,” Wilson said.

While many are sewing masks, Sherry Birnhak and her team are making headbands with special buttons to hold the mask straps.

The Save the Ears project started when Birnhak saw a message on social media from a nurse who explained that the elastic used to strap on a mask can sometimes severely irritate the skin behind the wearer’s ears, especially for those who aren’t used to wearing masks all day, every day at work.

The nurse asked for headbands to strap the masks to, instead.

That was April 1. By April 11, Birnhak and her 30 or so “sewing angels” had made 1,100 headbands. They are being provided free to anyone in the medical community who asks.

Although Birnhak at first enlisted friends to help, now most of the sewing angels are strangers to her, she said. They’ve connected via the Facebook page, called Save the Ears Project-NATIONWIDE CAMPAIGN-Helping Those on the Front Line, which has more than 1,000 members.

On the porch of the Birnhak home in DeLand, volunteers can access a system of buckets to pick up headband kits and drop off completed bands, to reduce person-to-person contact. There’s also some toilet tissue on the porch, with a sign that reads “Please take a roll if you need it.”

“That’s what our town is about — giving,” she said.