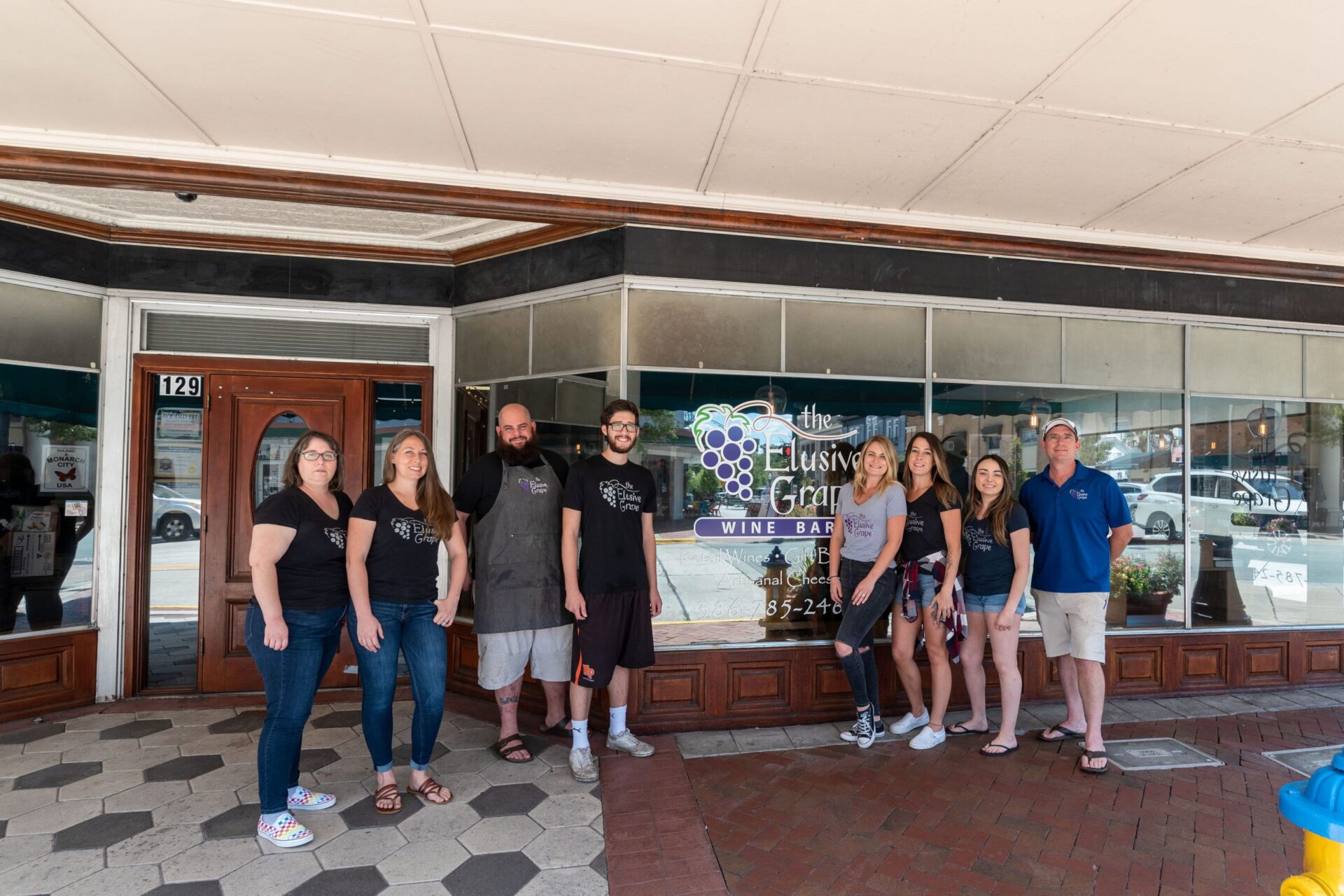 Downtown DeLand business owner Bill Budzinski tells us about The Elusive Grape’s community-service work during the coronavirus shutdown, and shares his impressions of what Downtown DeLand might be like in the foreseeable future.

1. You’ve been a tremendous support to The Neighborhood Center of West Volusia and the Spring Hill Community Resource Center since the pandemic hit. Can you explain how all that got started and how it has evolved?

When all the bars in Florida were closed, in mid-March, and a few days later, when restaurants were no longer allowed to have dine-in service, many purveyors were left with a lot of product in their warehouses, with nowhere to store it, and no one to sell it to, so there were a lot of deals to be had.

Conversely, The Neigh-borhood Center relies heavily on donations, especially meats and proteins, from local supermarkets, which at the time were pretty much selling everything they had, with very little left over.

When one of my salesmen called with a deal on chicken, my wife, Jen, and I decided to take advantage of it, and to donate it directly to The Neighborhood Center — 800 pounds.

While I was talking to a volunteer at The Neighborhood Center, they let me know that the Spring Hill Community Resource Center’s donations had dropped off dramatically, too, especially the prepared meals.

I had a meeting with our staff, and a couple of days later we all prepared a hot-dog lunch for 240, and sent it over to the Resource Center. Now we’re doing 120 lunches on Tuesdays, Wednesdays and Thursdays, and dinners for 150 on Friday nights.

2. Do you have a running tally of how much food you’ve donated?

As it stands today [April 29], we’ve donated a total of 9,800 pounds of chicken to The Neighborhood Center, and we’ve provided somewhere in the area of 2,500 meals to the Spring Hill C

WHERE’S THE MEAT? RIGHT HERE — At The Neighborhood Center of West Volusia in April, staff members and volunteers unload meat donated by The Elusive Grape to feed those in need.

ommunity Resource Center since the last week of March.

3. Have you funded this personally? Have others chipped in? Can you share any names?

We personally donated the first 2,600 pounds of chicken and the first 800 or so meals. Then two of our friends, Jon and Susan Hall, heard what we were doing, and very generously gave us $1,500 for The Neighborhood Center, and $3,500 to buy the food for the Spring Hill Resource Center. Which really was a godsend, because I wasn’t sure how long we’d be able to continue doing what we were doing.

Many more customers came forward with donations, ranging from $25 to $1,500, to keep it going. We’ve set up a separate account at Mainstreet Community Bank and, I’m happy to say that, including the Halls’ donation, we’ve raised over $12,000.

All of these funds are being used to continue to supply The Neighborhood Center, and to keep getting meals over to the Spring Hill Resource Center.

I’m talking directly with Neighborhood Center Operations Director Waylan Niece, and Shilretha Dixon at the Resource Center, and they’re letting me know what is needed, which is quite a lot these days.

4. What inspires you to help others so much? Is this something you’ve done all your life?

We try to give as much as we can, and most definitely to support local organizations. It’s definitely easier to do it when times are good, but it’s needed so much more when they’re not. Thanks to the generosity of so many, we’ll continue to do what we can.

5. Even before this coronavirus situation, Elusive Grape was a frequent donor to nonprofit fundraisers and causes. Do you have advice for other business owners about how to structure a business to make this possible? Do you use specific percentages and so on?

We budget annually for several local organizations and events that we support and sponsor, and generally use a small percentage of our annual sales as a benchmark. Things can change very quickly, as we are all quite aware, so I’d recommend keeping it as local as possible, and to give what you’re comfortable with and able to.

6. Elusive Grape has stayed open in a limited way for retail sales and food to go. How’s that going?

I’m so thankful for all the support we continue to receive from our friends and customers; this really is an amazing community.

Like everyone else, our business is down dramatically, but we’re trying to adapt to what is now “normal,” and at the same time preparing for what the “new” normal will look like.

We’ve always done gift baskets and gift boxes, and will now concentrate heavily on that aspect of our business, especially since Mother’s Day is coming up.

We’re also adjusting our business model to not rely as much on on-premise consumption (which we are unable to have any of right now), and to increase our retail gourmet foods and harder-to-find items — cheeses, meats, specialty baking supplies, etc.

7. You’ve also been very involved in Downtown DeLand, and have served as a member of the city’s Community Redevelopment Agency, which administers the special fund for Downtown DeLand improvements. What kinds of stories are you hearing from fellow business owners about how the pandemic is affecting them?

Everyone is really nervous, myself included, because not only is business down, but the prospect of what it will look like in the very near future is just unknown.

In the short term, we and many other Downtown merchants that I’ve spoken to, were fortunate enough to have our applications for the Paycheck Protection Program accepted during the first round of funding, but there are so many others that didn’t.

I just hope that everyone who needs it will be funded with the second round, because having a little security for eight weeks will go a long way right now.

After that, we’ll just have to wait, and see.

8. What do you think will be the full impact of these weeks of closure or near closure on Downtown DeLand? If you think full recovery is possible, how long do you think it might take?

Like everywhere else in the country, the world for that matter, what we saw as normal at the end of 2019 is most likely gone forever, and some of our Downtown merchants may not recover.

It could quite possibly be a year to a year-and-a-half before many people will begin coming out again, at least on a regular basis, or until there’s a vaccine. I am very optimistic, however, because this community of ours has worked too hard for too long, to make our Downtown what it is, and I know it will be back, hopefully stronger than ever.

9. Do you see changes for the way Downtown DeLand does business going forward? What kinds of changes? How can our local government help?

The city has been really receptive and great to work with since this all started, and we’ll be leaning heavily on them over the next few months for sure.

When, not if, we get open again, there’ll be so many issues to deal with — the obvious being social distancing, sanitizing and public safety.

For restaurants and bars, there will most definitely be a reduction in allowable occupancy levels, which means a direct reduction in sales. I’d look to them to allow us to set up tables outside — for The Elusive Grape, that would be out back in our parking lot.

Others could use parking spaces in front of, or on the side of their property, some could use parks, and I’d say Georgia Avenue and Indiana Avenue could be closed for vehicular traffic, especially at night, allowing all of the businesses on them to set up.

Our retail stores will have the same provisions, too, and will need as much traffic as possible, so whatever we do will have to be fair for all.

I’ll say this, when, not if , this is all over, we are going to have one heck of a Downtown DeLand Open House, Get Your Fun On, Street Party — like one big Dog Parade, Homecoming Parade, Christmas Parade, wrapped into Mardi Gras, and served with a side of Bike Rally, and I’m very much looking forward to it.

10. How long have you lived in DeLand? Where did you move from, and why? What has kept you here in DeLand?

I grew up in Alexandria, Virginia, but my father lived here in DeLand, so we came to visit every summer. I moved to Florida to go to school, then moved to St. Thomas for a short while. When it was time to leave there, Northern Virginia was no longer an option (snow, traffic, politicians, etc.). DeLand it was.

My first job was managing Wally & Julie’s restaurant, where I met so many great people, and heard one heck of a lot of stories (thank you, Family Table).

A few years later, I helped open Yesterday’s Restaurant in 1994. Then, in partnership with Bill and Frank Jennings, we opened Yesterday’s Garden (where Cress is now) in 1996, and then Fish Tales (where Venue 142 is now) in 2001.

I sold my part in 2002, and opened The Elusive Grape on April 1, 2003. I’m a proud member of the Rotary Club of Downtown DeLand, and I can say without hesitation, that moving here was the wisest (luckiest) decision I ever made, because most important of all, I met my wife, Jennifer, here in 1995. We were married in 1997, and we had our beautiful (not-spoiled) daughter, Kate, in 2008.

Jen was born in DeLand and grew up in Lake Helen, and went to DeLand High, then to the University of Florida, and she’s been working at Siemens Power Generation in Orlando for 27 years, where she’s currently a manager in the parts division.

Thankfully, she refuses to admit when she’s wrong, and apparently has horrible taste in men.