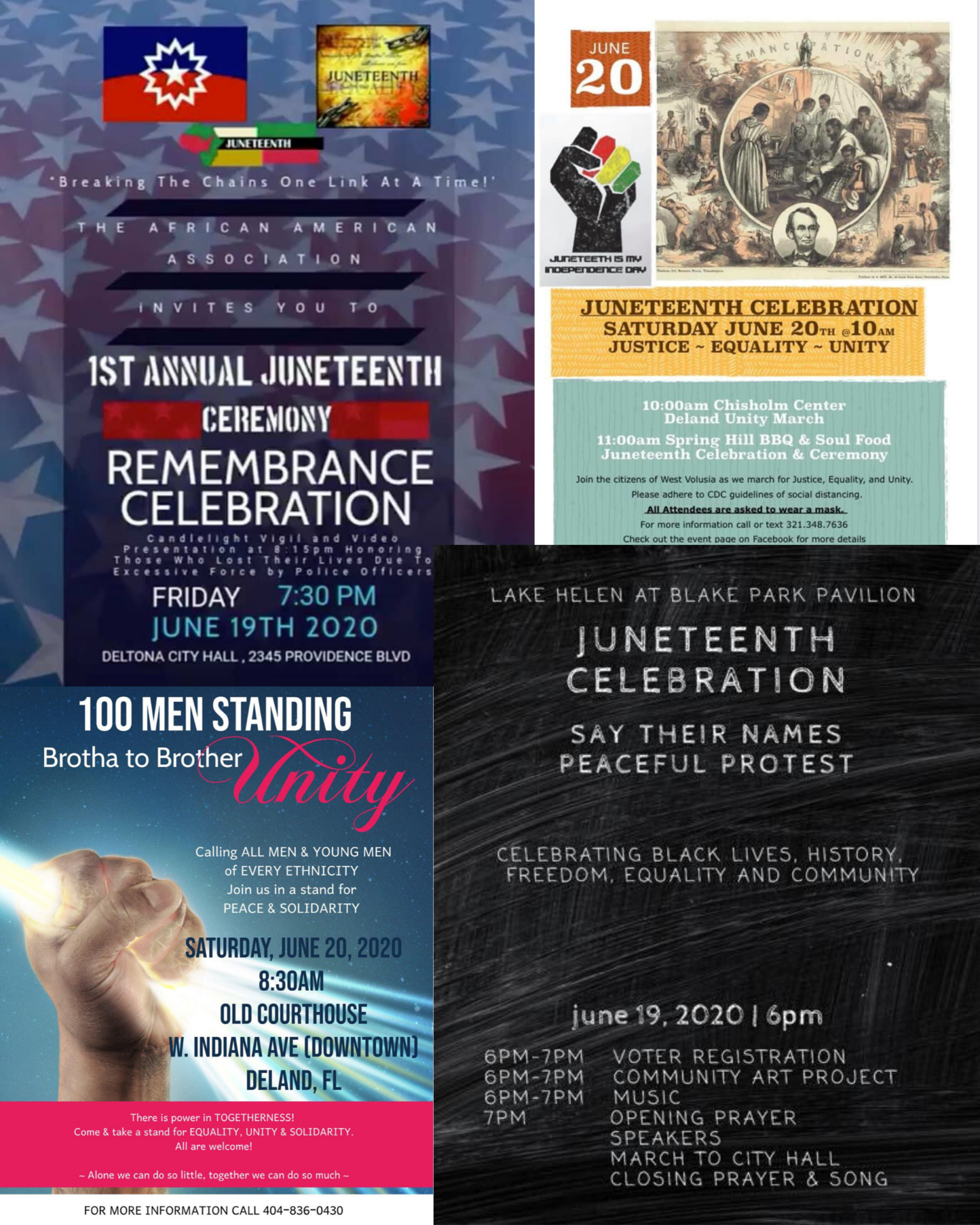 Juneteenth — an amalgam of “June” and “nineteenth” — is considered the longest-running African American holiday, and symbolically represents black independence day. The date marks the day in 1865 that slaves in Texas were officially told of their freedom, nearly two-and-half years after President Abraham Lincoln issued the Emancipation Proclamation.
Although not always well-known outside of black communities, the day has been regularly celebrated since its inception in the mid-1860s, and recent events have inspired locals to organize unity and educational events around the day — some for the very first time.
Lake Helen, DeLand, and Deltona are among the cities celebrating Juneteenth this year; all ask attendees to follow social-distancing guidelines.

A peaceful protest march, voter drive, and Juneteenth celebration are set for 6 p.m. in Lake Helen. Music, arts and crafts, and voter registration are all scheduled before a march to Lake Helen City Hall.

Deltona protest organizer Kimberly Aiken will kick off the beginning of an educational series aimed at opening dialogue and educating.

“It’s about learning the history of the people that are unknown,” Aiken said. “And inviting people to come and sit and have the conversation.”

Aiken is focused on education through open and honest conversations, she said, to address modern injustice that is rooted in history.

“The Band-Aid is sitting on the wound, and it isn’t closing. I want it to heal, but it’s not,” Aiken said. “Every time another person gets murdered by the police, it’s another whip from the slave master.”

“A lot of things that are happening today, we can curb at least a little bit with education,” Aiken said. “It’s about taking the time to have the conversation … and, moving forward, really bringing people together.”

The remembrance celebration is presented in conjunction with the African American Association of Deltona. All are welcome.

Longtime resident Andre Darby has organized a show of solidarity of men of all races on the steps of the Historic Courthouse in DeLand, at 8:30 a.m. June 20.

“Regardless of the myriad tragedies, one thing I am seeing is white brothers and black brothers and sisters are standing together,” Darby said. “[The event] is about solidarity — it’s about the journey of peace but in a united front.”

Darby, who is not affiliated with any organization, was inspired by recent events to organize.

“We have a tremendous opportunity to call on brothership right now,” Darby said. “It’s something in my heart to do, so I’m doing it.”

A West Volusia/DeLand unity march is set for 10 a.m. June 20. Attendees will meet at the Chisholm Center at 520 S. Clara Ave. and march to the Spring Hill BBQ & Soul Food Lounge at 905 S. Adelle Ave. for an 11 a.m. Juneteenth celebration and ceremony.

At the ceremony, awards will be given to leaders in the community, including the owners of three black-owned businesses located in the Spring Hill area: the BBQ restaurant, Gold Label Bar and Lounge, and the C-Store.

“The idea came to me shortly after I saw a lot of the protests that were going on, seeing the temperature and intensity … the balance of frustration and anxiety and anger with the desire for change in a positive way,” organizer Oliver King said. “That change cannot be one-sided; it must be a cooperative effort.”

After King learned that there was not a planned Juneteenth celebration, he moved to coordinate with local faith leaders for the unity march.

“There has to be something — it’s the perfect opportunity to bring law enforcement and faith leaders together to celebrate freedom,” King said. “All people can recognize and understand — can resonate with that sense of freedom.”

With recent events, and the negative attention the Spring Hill area has received, King and fellow organizers — Primrose Cameron of Sisters Build Inc., and Oliver King’s brother, Sean King, the vice president of the West Volusia Branch of the NAACP — are dedicated to focusing on the positives.

“We want to highlight the positives — the businesses that against all odds have succeeded … those in Spring Hill who have dedicated their time, their resources, their wherewithal, to make sure Spring Hill is lifted up.”

In future years, King hopes the march and ceremony will be much bigger, and go beyond Spring Hill into the rest of DeLand, and greater West Volusia.

All are welcome. Attendees are reminded to wear masks, practice social distancing, and stay safe.