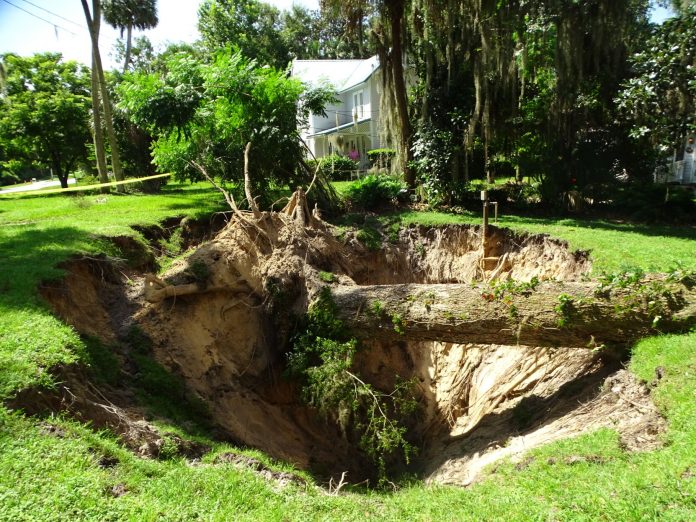 UPDATE, AUGUST 7: According to Amy Munizzi, president of the DeLeon Springs Community Association, the swimming area at DeLeon Springs State Park was reopened Aug. 6 after park officials received the results of tests on the water quality that showed swimming is safe.

UPDATE AUGUST 1.; A statement issued by Volusia County at 5:21 p.m. July 31 reported there are now three sinkholes opened up in DeLeon Springs, and said the swimming area at the state park is now closed. The county also said one of the smaller sinkholes caused damage to Park Avenue between Cortez Avenue and Desoto Drive, which was being repaired by county Road and Bridge crews. Also, the DeLeon Springs Community Association advised residents in an email, on advice from the Department of Health, that DeLeon Springs residents with muddy or unclear water coming from their faucets boil their water for cooking or drinking, or buy bottled water for consumption. The Community Association also advised running the water until any sediment clears.

Two sinkholes opened along Ponce de Leon Boulevard in DeLeon Springs this morning or last night, and that underground activity may have muddied the water in the swimming area at DeLeon Springs State Park.

Cindy Sperling, a DeLeon Springs resident who lives near the state park, said the water is much cloudier than normal.

“Even in the shallow area you can’t see through the water down to the bottom,” she said.

Sperling noted there were still plenty of visitors swimming at the springs when she visited this morning.

According to Pat Kuehn, in the Volusia County Community Information office, a Volusia County Sheriff’s deputy called the state sinkhole hotline at 11:30 a.m. today to report a 40-foot-wide, 20-foot-deep sinkhole at 484 Ponce de Leon Blvd. in DeLeon Springs, just down the street from the park entrance.

Nearby homeowners were advised by the county’s chief building adviser to keep an eye on the sinkholes and vacate their homes if they caverns open further. The opening of one of the sinkholes caused a large tree to fall.

Kuehn said the county believes the change in water quality in the springs swimming area is related to the sinkholes.

“When that part of the underground-aquifer cave system caved in, it created a bunch of sediment to be pumped up in the spring head,” she said.

Florida’s underground aquifer system is delicate and any change can cause disturbances. One employee at the Old Spanish Sugar Mill on the park property said she arrived to work today before the sinkholes were reported, and already noticed cloudy water.

Farley Palmer, a biologist and environmental consultant for Palmer Biological Services, said any disturbance in the aquifer could cause a change in water quality.

“When a collapse occurs in one place, you may see an effect somewhere else,” Palmer said.

The spring at DeLeon Springs flows from the Floridan Aquifer, a system of freshwater and carbonate rock that lies beneath most of the state of Florida. Palmer said the sinkholes may have caused the change in the spring’s water, but it could have been any number of other things, as well.

“Cave-ins can occur anywhere in a limestone aquifer,” he said. “I don’t think it would have to be a sinkhole. Any disturbance could cause it.”