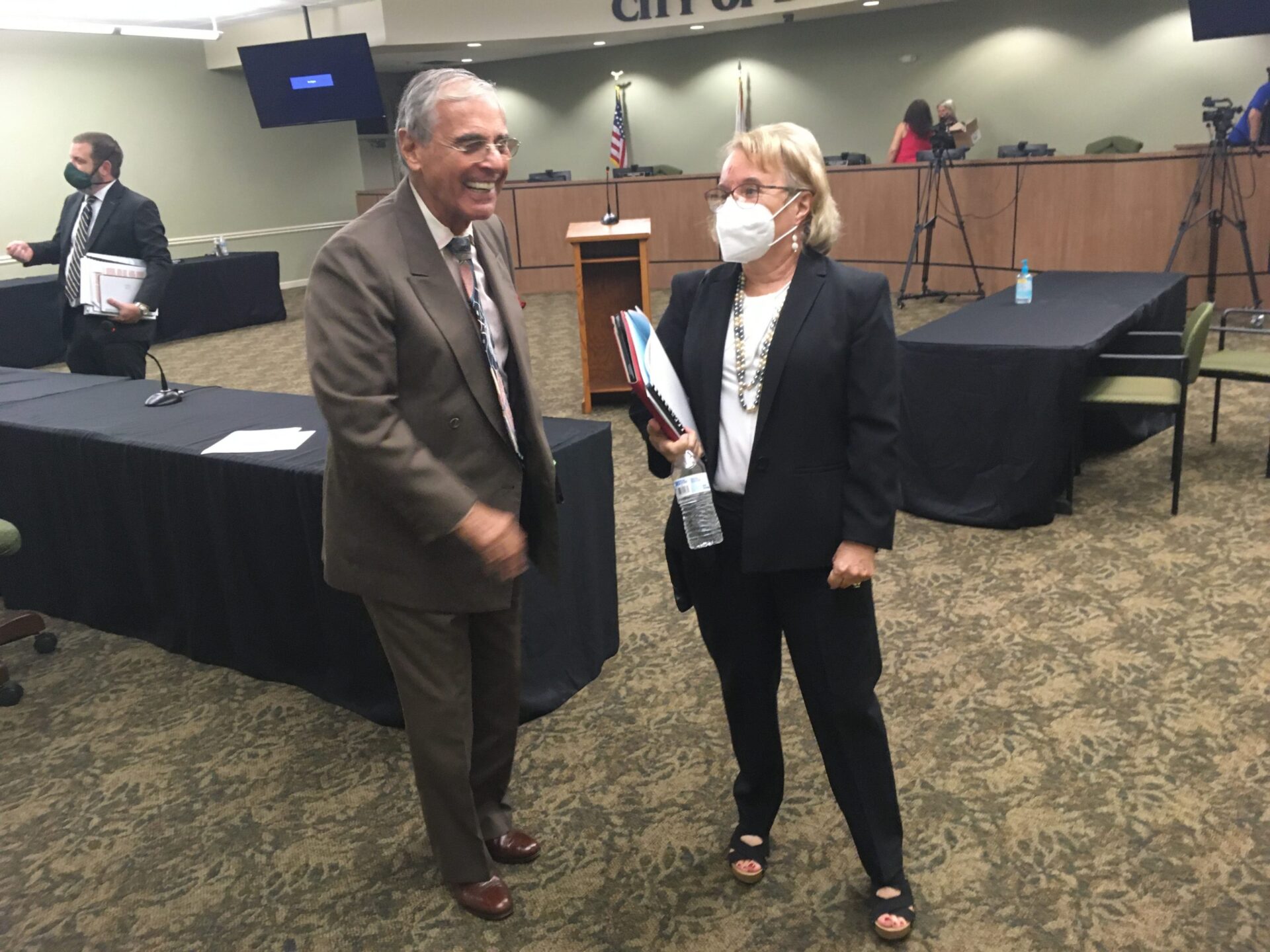 At the Aug. 5 hearing, a majority of the City Council concluded Bacon had violated the charter by improperly ordering City Clerk Annette Hatch to include some material in the minutes of a meeting.

Yet, the elected body agreed not to remove him.

“To me, it does not rise to the level of removal,” Mayor Karen Chasez said.

The forfeiture hearing played out despite an attempt by Bacon’s attorney, Jacob Stuart Jr., to delay it by filing a request in court earlier in the day. Stuart, speaking to the City Council via video, warned the removal of his client from office would not be the end of the story.

He said Bacon could not receive a fair hearing, because the City Council was “the judge, the prosecutor and the jury.”

The council nevertheless decided to go ahead with the hearing.

Following the testimony of four witnesses, statements by attorneys and debate among themselves, the City Council voted 4-1 to find Bacon guilty of breaching the charter’s strict separation of powers, by interfering in the work of DeBary’s administrative branch.

Bacon cast the dissenting vote. He also declined to testify in his own defense.

DeBary’s charter provides for a council-manager form of government. The elected five-member City Council, which includes the mayor, is the legislative and policymaking body, while the city manager, now Carmen Rosamonda, oversees the administration and its employees.

Individual council members are prohibited from involving themselves in the routine operations of the staff or directing the employees. Such involvement is a charter violation, and may be punishable by expulsion from office, upon a majority vote of the City Council.

A charter violation is not a criminal or civil offense, and does not result in a loss of civil or political rights, including the right to run for a municipal office in the future.

The incident that landed Bacon in trouble occurred followed the City Council’s May 22 meeting. Bacon approached Hatch and handed her notes he had read, and urged her to include them in the meeting minutes. Hatch told him she did not need the notes.

Drew Smith, the attorney hired by DeBary to represent the city staff, argued Bacon had given Hatch a wrongful order.

“This was direction authoritatively given,” Smith said.

“Telling someone to do their job is not an order,” he said. “It doesn’t mean you violated the charter.

When he learned Hatch had been troubled by the May 22 incident, Manager Rosamonda said he was concerned about possible “harassment and intimidation of an employee” and a “charter violation.” Rosamonda conducted an internal investigation and forwarded a report to the City Council.

The City Council decided at its June 3 meeting to slate a forfeiture hearing. It was first scheduled for July 1, but was postponed because Bacon hadn’t arranged for legal counsel, and also because City Attorney Kurt Ardaman was absent. Council members noted, too, they wanted to ensure that Bacon would have “due process.” The hearing was rescheduled for Aug. 5.

“This is not a personal issue,” Council Member Patricia Stevenson said at the Wednesday night hearing. “We’re protecting our charter and protecting our balance of power.”

“I have determined that there has been a violation of the charter,” Council Member Phyllis Butlien said.

When the time came to decide if Bacon should be punished with forfeiture of his elected office, Bacon made a humble plea.

“I like working as a team, and I think I can work as a team,” he told the other council members. “I would like to continue. … I can concentrate on what’s good in this community.”

By unanimous consent, the City Council decided to allow Bacon to remain in office.

Bacon is running for re-election for Seat 1 on the DeBary City Council. His opponent in the Tuesday, Nov. 3, general election is William Sell.

Council members are elected citywide for four-year terms. The races are nonpartisan, and all registered voters who live inside DeBary city limits may cast ballots.