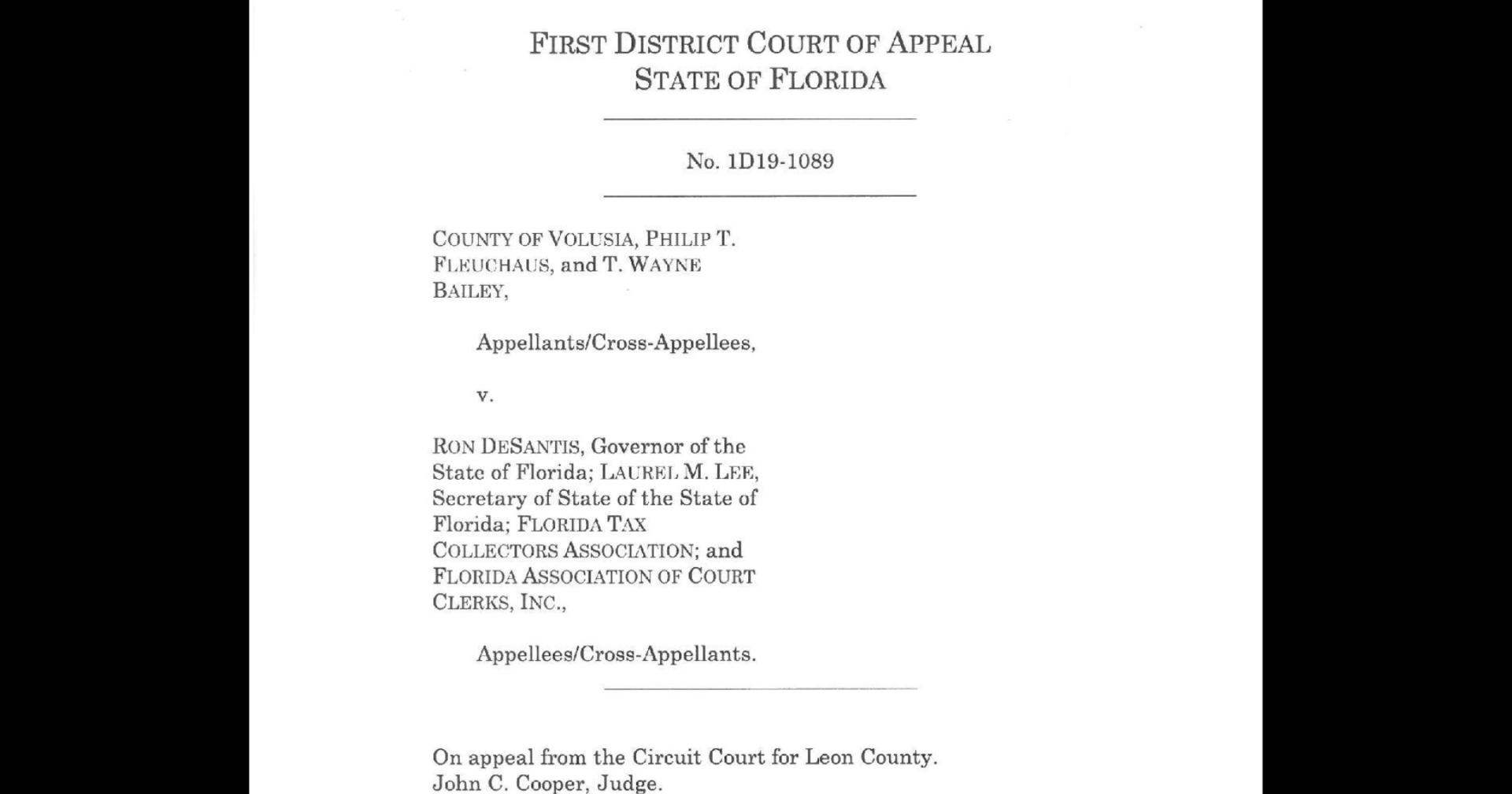 It was a case that pitted Volusia County’s half-century-old charter against a 2018 voter-approved change in the Florida Constitution, and the county lost the latest — and perhaps the final — round of the legal battle.

The county, which objected to the changes mandated by the change in the Florida Constitution and upheld by judges, may decide Aug. 25 whether to appeal to the Florida Supreme Court.

Bailey, along with Dr. P.T. Fleuchaus, created the county’s charter that made the county a somewhat unique place in the Sunshine State.

“We did fight Amendment 10, and we lost. We accept the outcome,” Bailey added.

More than 10-and-a-half months after the case was argued before the 1st District Court of Appeal in Tallahassee, the panel ruled the county must restore constitutional status to certain elected officials.

The case that has wound its way through the political process and the state’s judicial system for the past two years involves controversy and myriad legal and historical factors:

— By a popular vote, Florida’s voters adopted a new constitution in 1968, the first since the Reconstruction-era constitution of 1877.
— The 1968 Florida Constitution, still in effect but amended many times over the past 52 years, granted more autonomy, or home rule, to counties wishing to establish their own form of local government, subject to the will of the electorate. Volusia was the first in the state to experiment with home rule, by adopting a charter that set up a new type of government, one that mirrors the city-manager form of government.
— On June 30, 1970, in a special referendum, a majority of Volusia County’s voters adopted the charter drafted by Bailey, Fleuchaus and their allies. The new charter would replace the five-member County Commission with a seven-member County Council.
Whereas the county commissioners wielded both legislative and executive power, the County Council would be strictly a legislative and policymaking body that would hire — and fire, if necessary — a county manager who would be the chief administrative officer of the county’s hierarchy.
— The charter went into effect Jan. 1, 1971, and the then-newly elected first County Council subsequently hired Dr. Tom Kelly as Volusia’s first county manager.
Not only would the elected members of the County Council be restricted from involving themselves or interfering in the routine administrative activities of the county government — from such things as fixing roads or cleaning up county parks — but other elected county officials, including the sheriff, elections supervisor and property appraiser, became elected department heads within the hierarchy headed by the county manager.
The elected tax collector vanished over time, as the duties of the office were transferred to the county’s revenue and finance staffers.
— Fast-forward to 2018. The Florida Constitution Revision Commission, a special body that comes into being every 20 years, recommended a series of amendments of the state’s basic law. One of those propositions was known as Amendment 10, or Revision 10. The proposition on the ballot contained a number of miscellaneous items bundled together in a single package that required the citizens to vote for or against all of them — yes or no, up or down.
Amendment 10 conferred constitutional status for the aforementioned elected officials, meaning they would actually become state officials answerable to the governor and could appeal to him/her in local budget disputes. That point, however, was lumped together with a requirement for a permanent state department of veterans affairs and a mandate for a state agency on homeland security.
— Aware of the changes that could be in the making, Bailey and Fleuchaus sued to prevent Amendment 10 from going on the ballot. The plaintiffs contended the changes, if approved by Florida’s voters, would undermine and even negate Volusia County’s home-rule charter. The plaintiffs lost their lawsuit to stop Amendment 10 from being placed before the state’s electorate.
The plaintiffs, joined by the county, argued Volusia County’s home-rule charter, adopted in 1970 under authority granted by the 1968 Constitution, was in place before the adoption of Amendment 10. Therefore, the logic ran, the county and its charter should be “grandfathered in” and protected against any changes to its existing government.
— A supermajority of Florida’s voters — 63 percent — ratified Amendment 10 at the polls in the 2018 general election.
Volusia County sued to prevent the implementation of the constitutional status for its elected officials, based on the charter’s pre-existence vs. the late advent of Amendment 10. The county lost at the Circuit Court level, and it appealed to the 1st District Court of Appeal in Tallahassee.
Throughout the post-election legal battle, the county argued that if Amendment 10 were to be implemented, it should be applied prospectively, rather than retroactively. Volusia County, the plaintiffs said, should be exempt because its charter was already in effect before the constitutional change.
— The appellate court heard oral arguments Oct. 3, 2019, and the court ruled Aug. 17 that Amendment 10 takes primacy over the county’s charter.
“This amendment [Revision 10] effected a prospective change, giving the County a deadline of January 5, 2021 to comply, expressly beginning ‘with respect to the qualifying for and the holding of the primary and general elections for constitutional officers in 2020,’” the ruling reads. “The amendment required the County only to alter its future structure for county constitutional offices, which makes the amendment prospective and not retroactive.”
— All is not lost. Bailey said “the basic structure of the county government remains.”
“The only thing it [court ruling] does is that some of the elected become constitutional officers,” he added. “The only question is how much it will cost.”