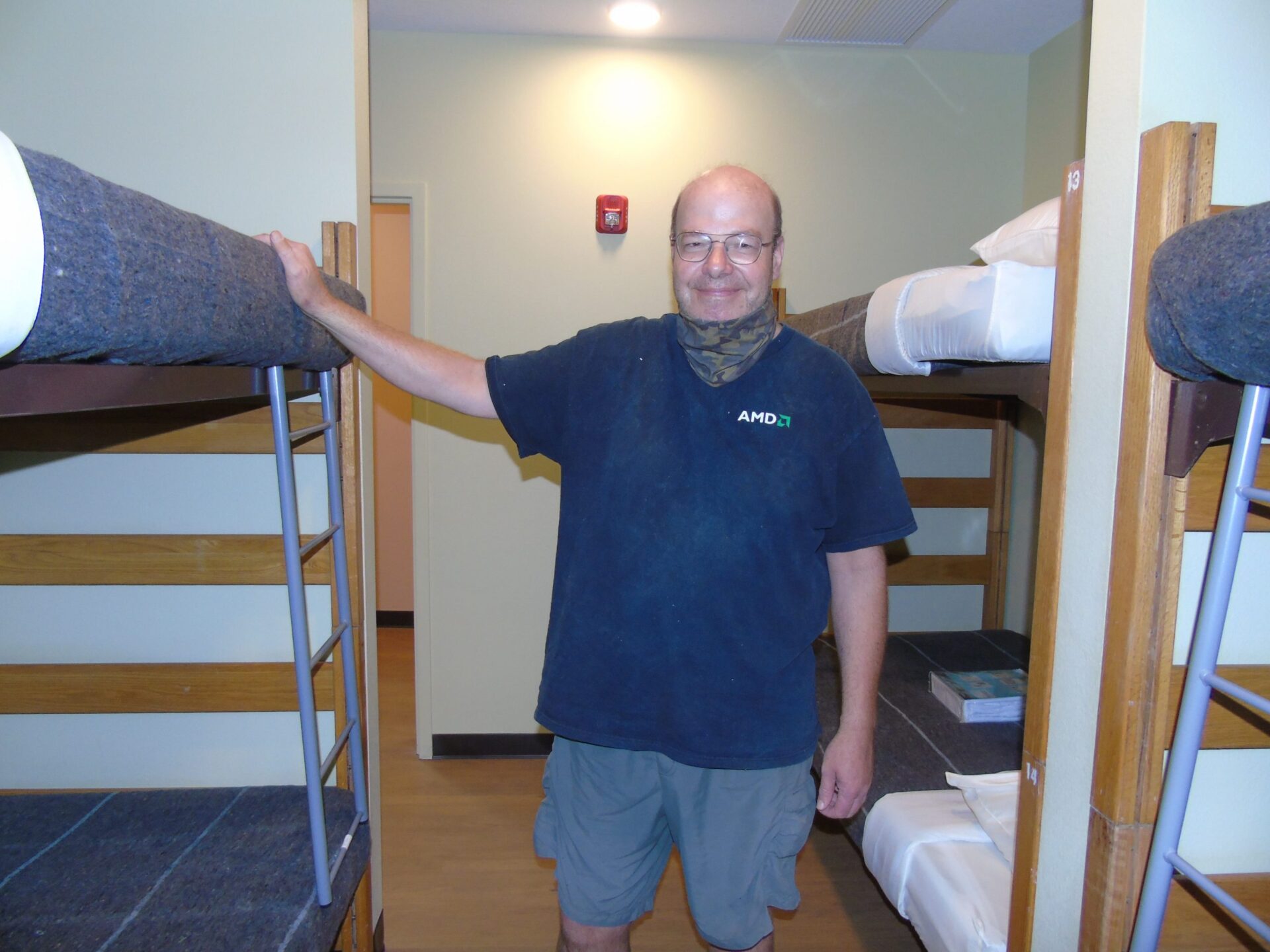 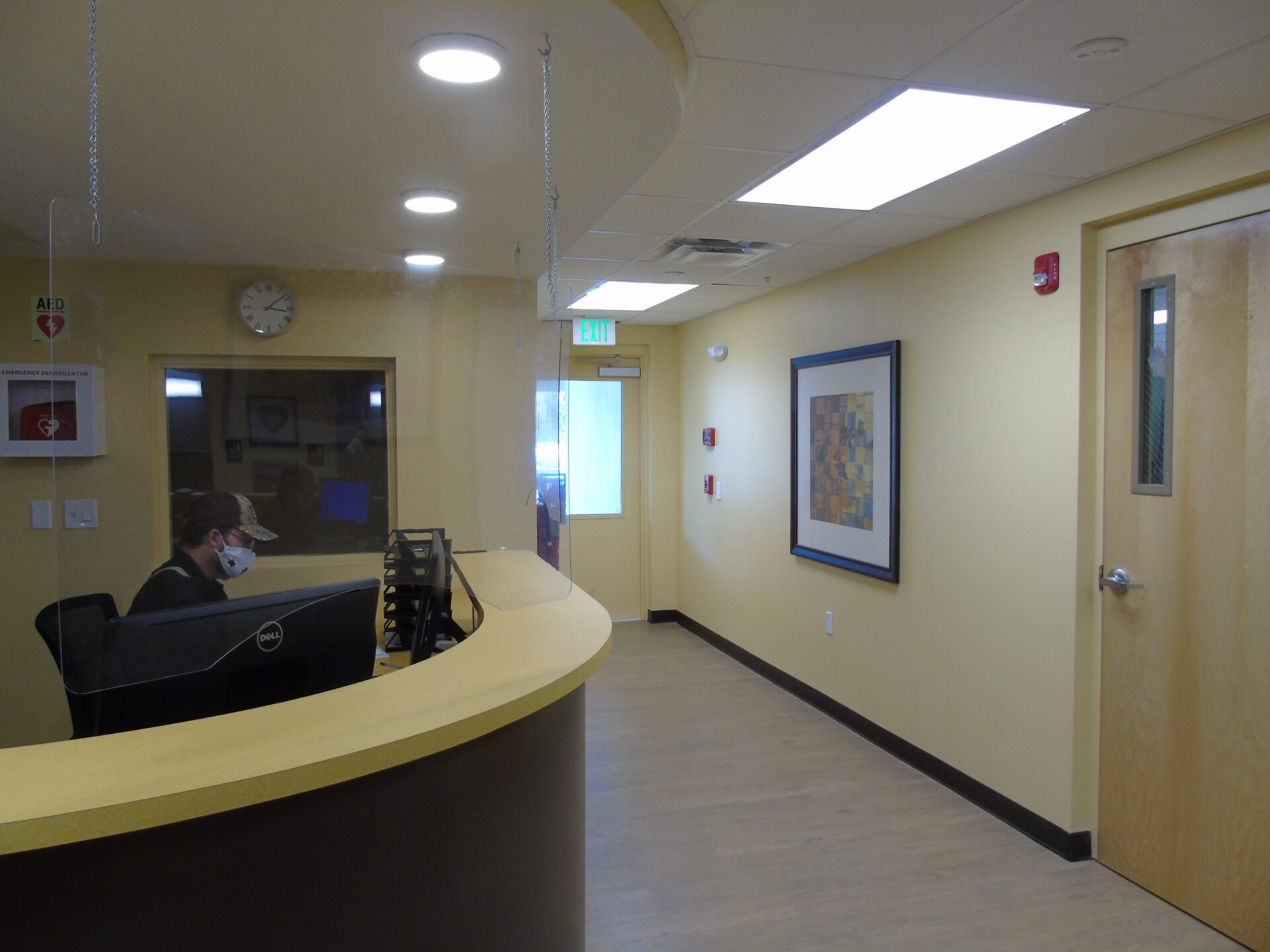 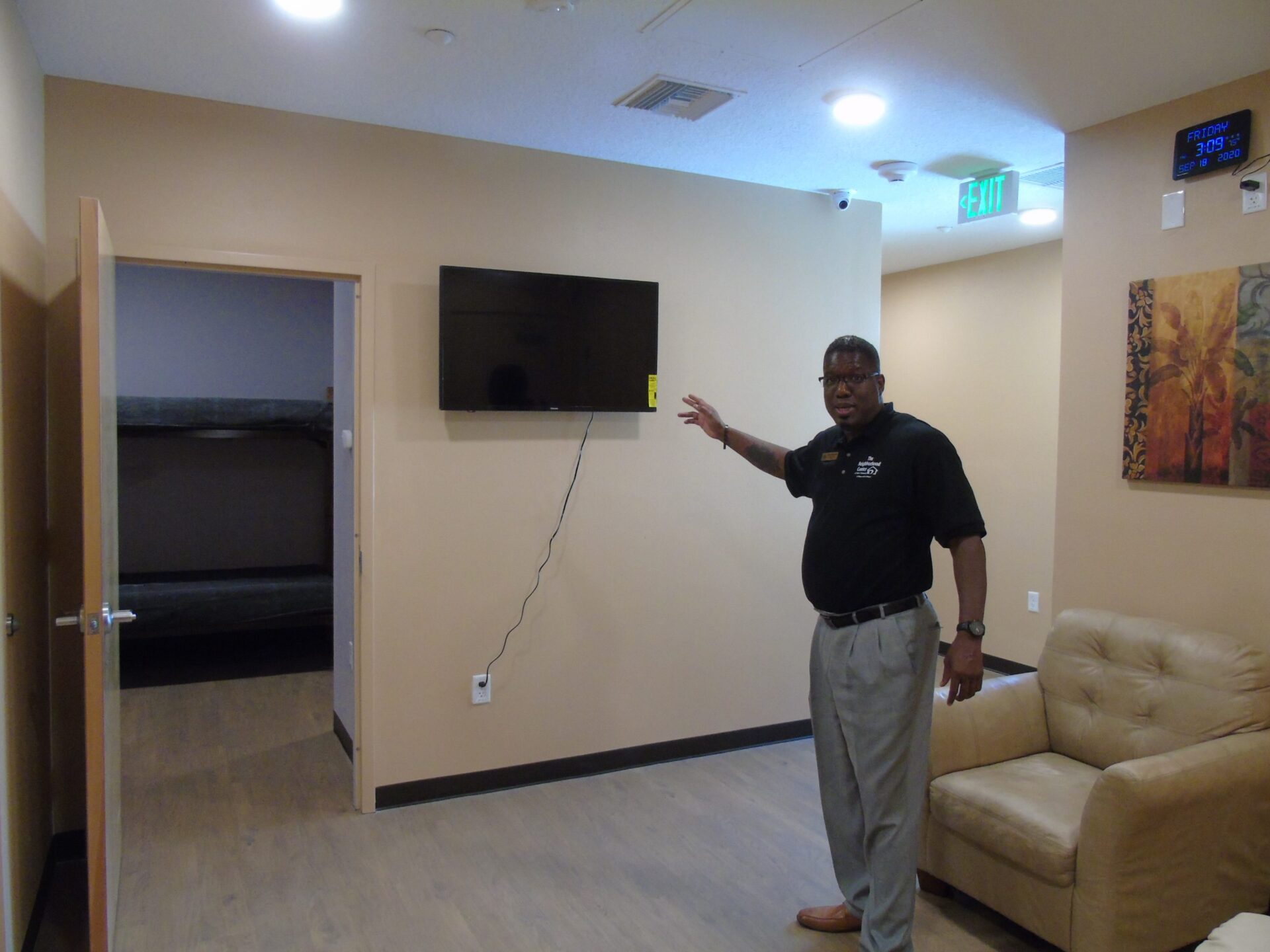 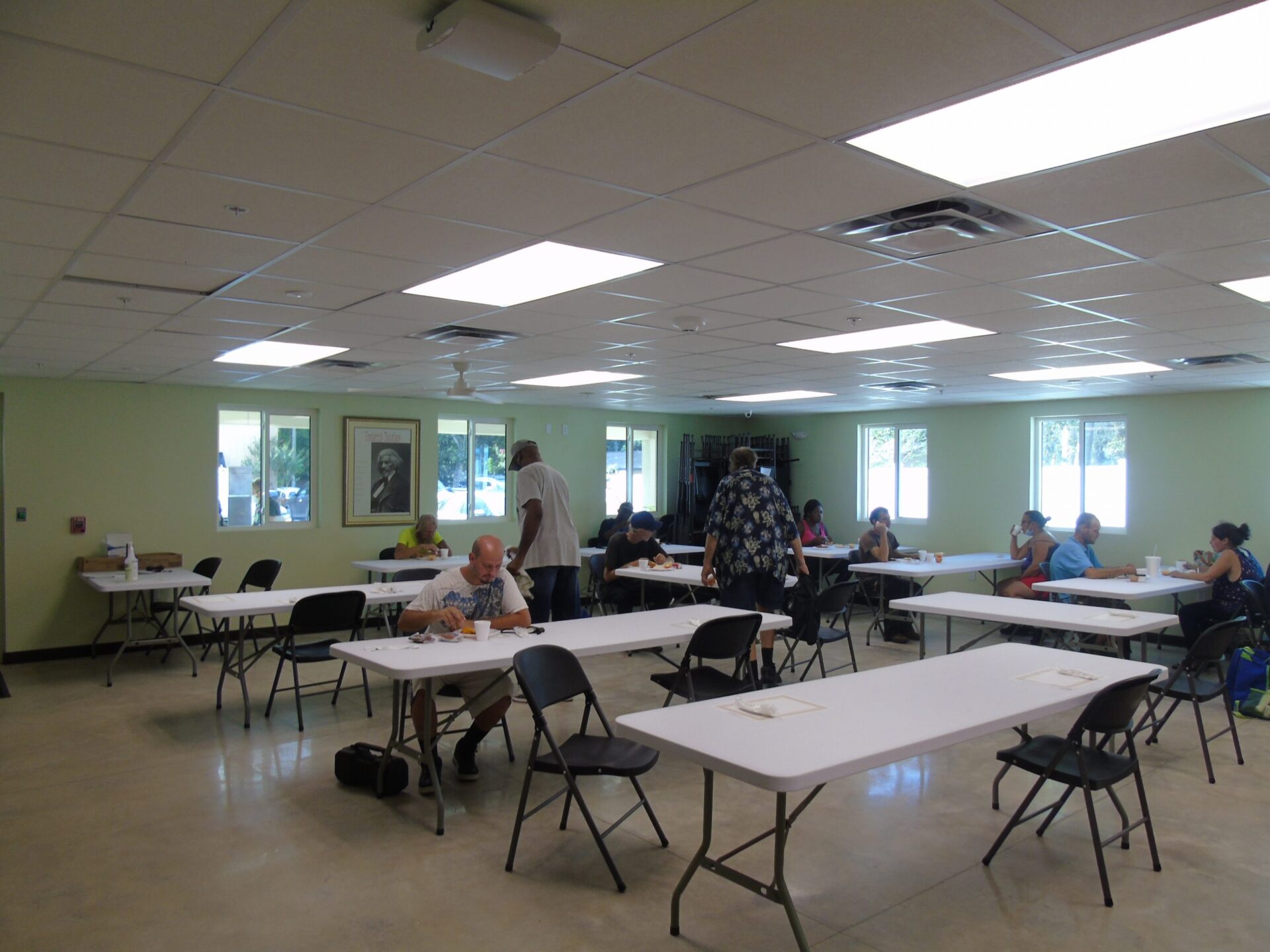 After years of visioning, fundraising and construction, a new facility south of Downtown DeLand is finally ready to fulfill its primary mission: giving West Volusia’s most vulnerable residents a hand up.

The shelter has been partially open for meals and other activities for a couple of weeks, with the kitchen opening Aug. 18, shelter director Michael Forrester said.

“We wanted to open that first — kind of roll that out first, just to kind of get a feel for how we wanted to open each department, each stage of the operation’s process,” he said. “We wanted to go through and make sure it rolled out smoothly, and that the clients were receptive and they were happy about everything, and that it met our specifications from an operational standpoint.”

The $2.1 million facility is operated by The Neighborhood Center, a long-standing charity working to prevent and alleviate homelessness in the area.

The shelter can house up to 30 people, and it is designed to be closely integrated with services provided by The Neighborhood Center and other groups like Interfaith Kitchen, who already provide transitional housing and homeless feeding, respectively.

It also gives DeLand police and other officials a nearby place to send homeless individuals in Downtown DeLand and around the city, rather than having to direct them to a shelter in the middle of the county, like Volusia County’s First Step Shelter.

“The plan is to offer to them that The Bridge can help you, and we’ve all talked about that, and talked about it with the chief and the command staff, and certainly, that is the plan,” Pleus said.

The average stay for a client is estimated to be anywhere from 30 to 90 days, depending on services needed by a particular client. Forrester said because of the shelter’s connection with The Neighborhood Center, “wraparound” or transitional housing is available for clients who “graduate” from the shelter and are ready for a more permanent living space.

Forrester, a St. Augustine native, was recruited to this area specifically to head up The Bridge. He said he’s had experience working with residential homelessness-alleviation programs for the past 12 years.

While having the facility open for meals and other services was a significant step, Forrester said he was excited and overjoyed to serve The Bridge’s first residential client.

“We are just overjoyed for the opportunity to meet the needs of the client, whether it be with mental-health issues, whether it be social services, getting a Social Security card, getting them Medicaid, and then just putting them with our case-management team to provide them with their own individualized career-service plan that will guide them back to a sense of normalization and stabilization,” he said. “The number one piece is getting them into housing.”

The shelter is designed to be a “low-barrier” shelter, meaning homeless individuals can come as they are, and leave the shelter’s campus during the day as they please.

The hope, however, is that the facility’s programming will keep clients engaged enough during the day that they’ll be busy working toward meeting their personalized goals.

The facility’s first official client is a man named John Hill, a former computer-repair technician who has fallen on hard times.

Hill expressed nothing but gratitude when asked about The Bridge and its programming.

He has been homeless for about three years, most recently living out of a camper van, due to a combination of health and financial issues.

Hill said he hoped The Bridge could help him find medical services and more permanent housing.

Asked what success for the facility might look like some months down the line, director Forrester said it’s all about being able to find out what a given client needs and how those needs can best be met. Clients are often defeated and at a low point in life when coming into facilities like The Bridge.

“When they go through the process, and you’re constantly doing check-ins with them … you’re doing all types of interventions, and you’re assessing them along the way, and you’re making sure they feel supported and loved,” Forrester said.

“You’re making sure that they’re on track with their job awareness, their medication management if they have prescribed medication, but watching all the dots connect, and that individual taking it upon him or herself to putting a stamp of approval on it and saying, ‘I have it,’ and by them being able to keep the light switch on, it would be a remarkable and beautiful thing,” Forrester continued.

More than 150 people have already volunteered their time and energy to The Bridge, helping a contingent of 13 paid staffers.

“I just want to thank the community and the volunteers, because they are a huge piece of the puzzle, and they have committed so much time and effort,” Forrester said. “It’s just a joy to have them here. It’s remarkable how they’ve taken time out of their busy schedules to say, ‘I want to give back to a charitable organization,’ out of an abundance of love, and that’s what they’re doing.”

‘EVERYTHING HAS COME TOGETHER’

City Manager Pleus has spearheaded the project and has tirelessly advocated for funding to construct and run the facility.

He said a handful of residential clients would be welcomed during the first full week of operation, just to make sure staff and volunteers can handle the workload.

If all goes well, the facility could be up to full capacity the following week. Pleus expects the shelter to stay pretty full once it’s up and running, due to demand.

For Pleus, the shelter finally opening and welcoming residential clients is a culmination of years of work.

“It’s really cool, they’ve done a great job getting it set up. I’m really, really proud of how everything has come together,” Pleus said. “I think we’re really going to help a lot of people who are experiencing poverty and homelessness in the city.”

He talked about the long road to get here.

“For me, this has been a four-year-long project, from the initial discussion the county was having because of what was going on in Daytona Beach,” Pleus said. “I was trying to figure out what we were going to do about homelessness in West Volusia, and Susan [Clark, executive director of The Neighborhood Center] and I would have these conversations about, ‘What if we built our own place, that could serve the homeless in West Volusia?’”

The project was motivated in part because several volunteer groups based in West Volusia said they would support a facility in DeLand like The Bridge, but that they would “really struggle with” going out to the center of the county, where Volusia County built its own homelessness facility, near the Volusia County Branch Jail.

Pleus said The Bridge is estimated to cost about $479,000 annually to operate, and that the city has made a commitment to help The Neighborhood Center raise money for The Bridge for the foreseeable future.

Currently, everything is fully funded for at least the first couple of years.

“We are solidly funded for the first couple of years in terms of the commitments that we have, but we do need to fundraise some,” he said. “We’re going to be a little short in the outer years, but we’ll get there.”

Pleus acknowledged COVID-19 has put a crimp on many nonprofit groups’ ability to raise money, but he remained optimistic.

He also pointed out that The Bridge itself has COVID-19-prevention protocols, including temperature checks for all entering individuals, regular use of sanitizing foggers, and “touchless” distribution of meals, as opposed to buffet-style dining.

For Pleus, the shelter’s opening represents a capstone moment on a professional level.

“It’s probably the most exciting thing I’ve ever had a chance to work on in 25 years of public service,” he said.