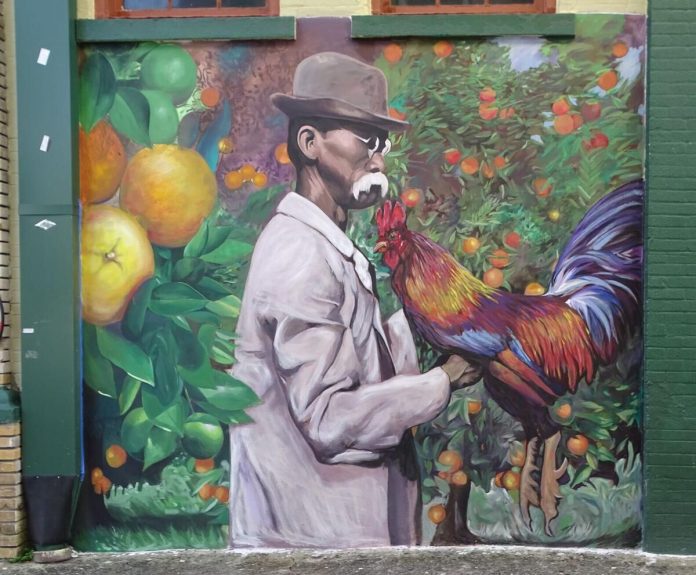 Lue Gim Gong was born in Canton, China, in the latter years of the 1850s. He grew up on a farm where rice, vegetables and citrus were grown, and his mother taught him cross-pollination and grafting.

During his childhood, China was in the midst of a sustained period of local economic hardship. When Lue heard stories of the many opportunities across in America, he longed to be part of the adventure.

With his parents’ blessing, and a bolt of silk to pay his way, he sailed off for San Francisco’s Chinatown in the company of some older boys.

Through an unlikely connection between young Lue and the well-established businessman Calvin Sampson, along with Frances “Fannie” Burlingame (both wealthy Massachusetts residents with property in Florida), Lue would go on to leave an enormous horticultural legacy.

Lue becomes a Florida property owner – but a lonely one

In 1903, Fannie died and left all her Florida property to Lue as well as a generous bequest. Considering himself now quite well set up for the future, Lue proposed to Fannie’s Swedish maid. She did not accept his proposal. From that point on, he grew more and more reclusive, devoting all his time to his experiments. His only company on his property was a mare and her foals, Fanny and Babe, and the two followed him around like dogs.

One day, Lue found a young rooster in his garden that had fallen from the clutches of a hawk. He named the rooster “March” for the month in which Lue rescued him.

March turned out to be Lue’s most faithful companion of all, always perched on Lue’s shoulder as he walked about his property. At mealtimes, March remained in this favored position, and Lue fed him table scraps from his plate. It is said that March was a true “guard rooster” who readily plied his spurs if he thought someone got too close to his beloved master.

How Florida’s freezes influenced Lue’s work and his legacy

In 1904, after a severe freeze afflicted the groves, Lue began his attempts to breed a frost-resistant orange. In 1909, he unveiled his new introduction, which he created by cross-pollinating two varieties of orange, the “Mediterranean Sweet” and the “Hart’s late Valencia.” The resulting hybrid retained the sweetness and frost-tolerant qualities of its parents and was registered as the “Lue Gim Gong” orange.

In 1911, this orange earned the Wilder Silver Medal, given by the American Pomological Society, a nationwide group of fruit growers. When the Society presented the award, they stated their belief that this was the first time the medal had been bestowed for citrus.

Growers continued to use Lue’s orange for many years into the 20th century, but despite its hardiness, the last plants of this variety apparently were wiped out in the prolonged freezes of 1983 and 1985.

While word of Lue’s work was spreading in horticultural circles, he continued his creative experiments to produce some exotic varieties of fruit. Growers from the area as well as professors, botanists and celebrities from across the country were now coming to his 40-acre grove west of DeLand to talk to this unusual and gifted man.

In 1913, Ransom Olds, the famous automaker, asked Lue to help him develop an agricultural area in the new city Olds was starting on the west coast of Florida, northwest of the city of Tampa. It was there that Olds laid out the streets of the town he called Oldsmar, and he honored Lue’s work by naming one of the new city’s streets after him.

Not great at business

Even with all this recognition, and the supportive advertising of his orange that Glen St. Mary Nursery provided, Lue spent his later years in poverty. He badly mismanaged his business transactions, typically giving away large amounts of valuable fruit and bud stock to visitors. Some of his stock was even stolen from his grove, and dealers selling his fruit and flowers often cheated him of his royalties.

During these years, his grove always hovered on the brink of bankruptcy and, all too frequently, Lue would go without food in order to feed his animals. Ultimately, it became necessary for friends to pay the taxes on his property to prevent his losing it altogether.

When he died in a DeLand hospital on June 3, 1925, Lue was buried in the city’s Oakdale Cemetery. It was later reported that boxes of uncashed checks were found scattered all around his house.

A few years later, the Society also commissioned a bronze bust in his likeness that is sheltered in a gazebo on its DeLand property and surrounded by an orange grove of late Valencia oranges.

On one of the gazebo’s inner walls, there is a plaque inscribed with the motto that guided Lue’s life: “No one should live in this world for himself alone, but to do good for those who come after him.”

She is a contributing author for two previous works: The DeLand Historic Mural Walk published by the MainStreet DeLand Association, and A Field Guide to DeLand Buildings published by the West Volusia Historical Society.

Her book A Better Country Beyond — along with many other books, videos and other materials about DeLand’s history — is available for purchase fro $29.95 at the West Volusia Historical Society’s Robert M. Conrad Educational & Research Center at 137 W. Michigan Ave., DeLand.

Ryder donated the book; proceeds from its sale benefit the Historical Society.

The center is currently open on a limited basis, and visitors are encouraged to make appointments by calling 386-740-6813, or emailing delandhouse@msn.com.