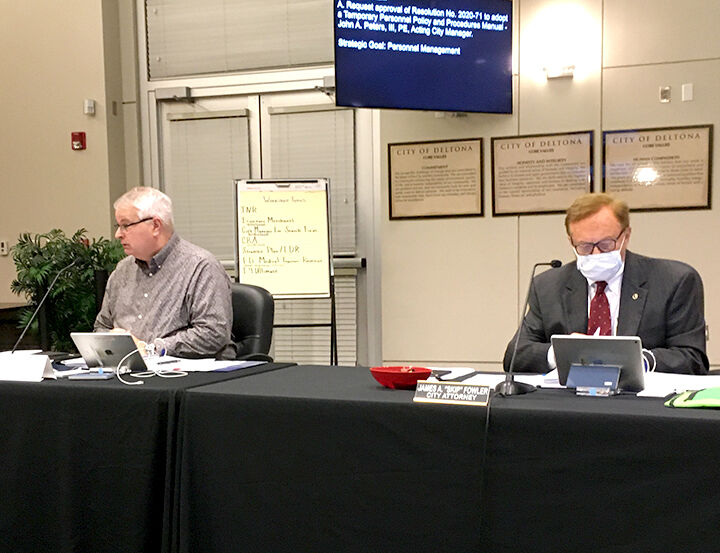 In exchange for his work directing and supervising day-to-day operations of the municipal government, Peters will be paid a starting annual salary of $160,000, with the prospects of additional increases in the months ahead.

His yearly pay as Public Works director was $125,000, for managing Deltona’s infrastructure systems, including the water and sewage utilities.

Pay was a major issue in the debate leading up to the final agreement.

After extended debate, the commission agreed to evaluate Peters’ performance at the end of three months. If the members are satisfied, he may receive a $2,500 increase in pay. If Peters receives another favorable evaluation at the end of six months as manager, he is to be rewarded with another $2,500 boost.

The pre-holiday shake-up at City Hall resulted when some members of the commission expressed their displeasure with Cooper for allegedly not keeping them informed about city business.

The demotion of Cooper, who is Black, raised concerns on the part of NAACP West Volusia Chapter President Mike Williams.

“What was the need to remove Dr. Cooper from his position?” Williams asked the City Commission. “If you had a problem, why didn’t you meet with him? … What was the urgency for doing what you did?”

Williams’ questions went unanswered; it is the policy of the Deltona City Commission not to respond directly to comments and questions during public-participation time.

The City Commission on Nov. 19 tapped Peters to become acting city manager, retaining Cooper as deputy manager but placing Peters in overall control of the city administration, until or unless a new permanent city manager is hired.

The contract also provides for Peters to receive a $400 monthly car allowance and for the city to pay an amount equal to 6 percent of his salary as deferred compensation, a nest egg that he may take with him if or when he leaves the city’s employ.

Moreover, if the City Commission removes Peters from his post, he will receive 20 weeks of severance pay. That provision raised eyebrows, but Peters explained.

“I’m taking this position at great risk,” Peters said. “My exposure is very high. … You can terminate me on a 4-3 vote, and I’m gone. I don’t even get to go back to my old job.”

The commission unanimously agreed to allow Peters to return to his former post of public-works chief in the event his tenure as acting city manager is cut short.

The City Commission set out a task for Peters in his new role: employee evaluations.

“I want everyone to have a level of comfort so that they know they are valued,” Commissioner Dana McCool said.

As for work-performance evaluations, commissioners urged Peters, and he agreed, to implement evaluations for all city employees.

“Transparency is the gateway to Deltona’s future, and that is my commitment to you,” he said.