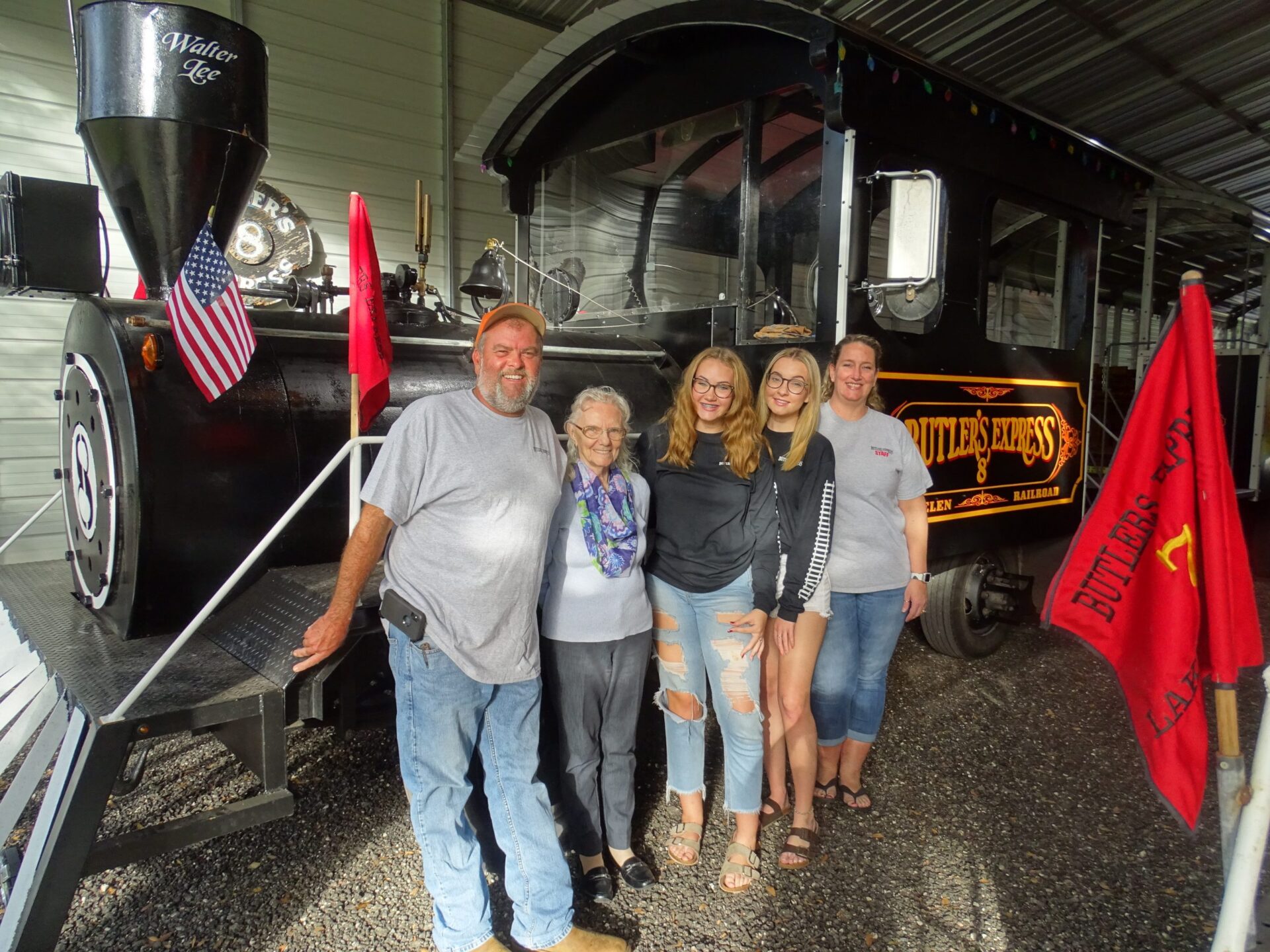 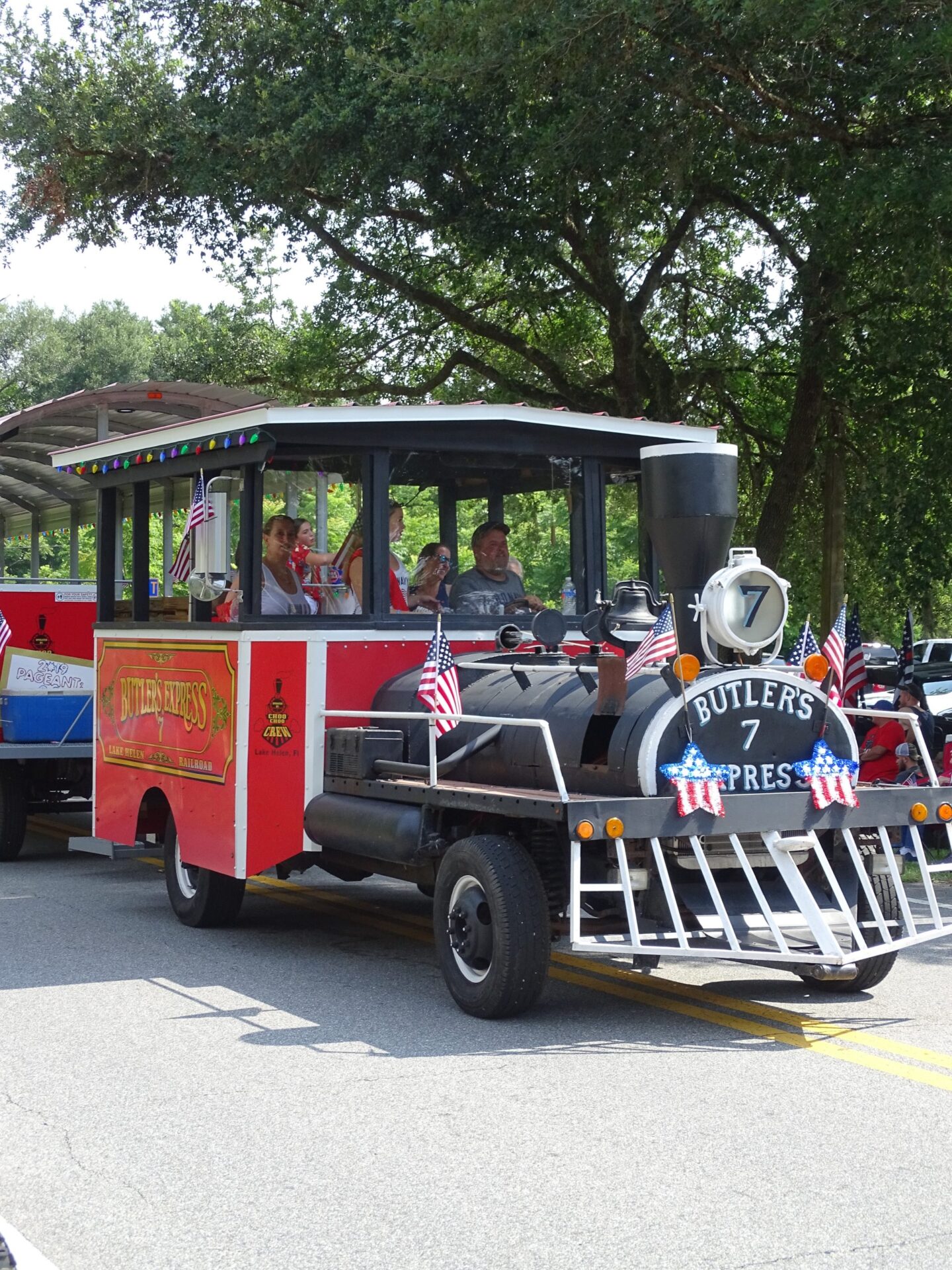 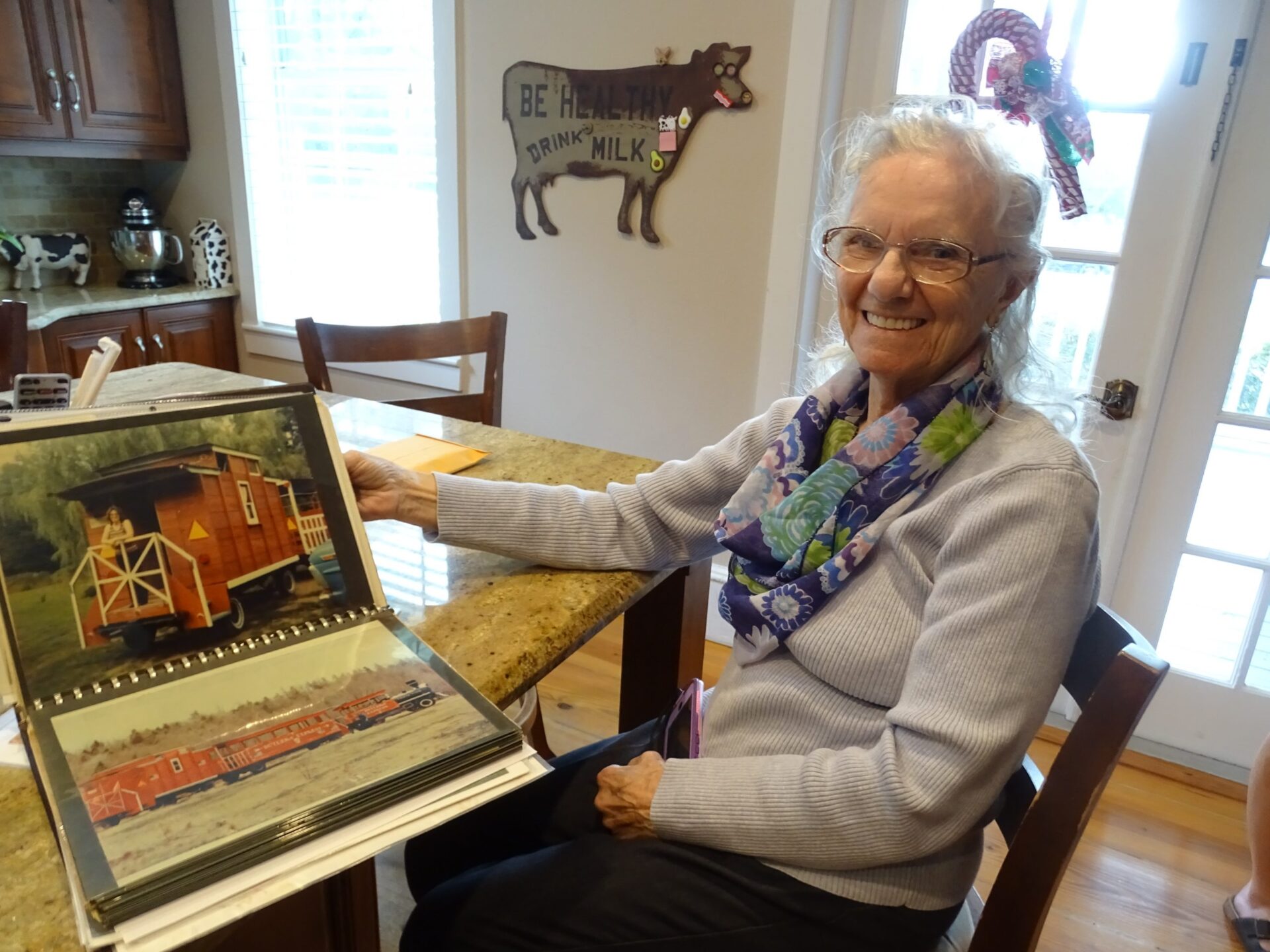 The Butler Express, a beloved Christmastime train that runs in Lake Helen, is more than a magical holiday experience — it’s a continuation of a legacy.

For more than 30 years, the handmade 1883-style No. 8 train, originally built from an old horse-drawn wagon, has chugged through the streets, steered by the competent hands of creator David Butler, an inventor and tinkerer originally from Pennsylvania.

Butler came to Lake Helen in 1975, and promptly began touring Volusia County with his contraption. On Saturdays, he would offer rides through Lake Helen in the train, which had a smoke stack built of tin, a roomy passenger car, a caboose heated with a pot-bellied stove, and a 440 cubic inch Chrysler engine.

Ultimately, not unlike many visitors to the quaint and quiet town off the beaten path, Butler ended up retiring for good there in 1985 with his wife, Virginia. Eventually he added a second train — the No. 7 — and a snack shop that sold hot chocolate, coffee, popcorn and more.

The train is part of the memories of every longtime Lake Helen resident, as it meandered a circuitous route through the city during Saturday tours, special events, or just any plain old nice day for a ride. Residents especially remember the annual Christmas tour of lights.

But eventually, David Butler’s health began to fail. He passed in early 2018, and what was to become of the train, and the beloved Christmas tradition, was up in the air.

That’s when Alan Cooke, longtime Lake Helen resident and a tinkerer himself, stepped in.

More than two years ago, the Cooke family sat down together to discuss the Butler Express.

Sitting around their kitchen island, the Cookes explained that moment.

“I explained, you guys, I said, I got this opportunity,” Cooke, patriarch of the family, said.

“And we’re like, oh, no, what did you buy?” Cooke’s 17-year-old daughter, Addison, laughingly recalled.

“He said, would you guys be OK, if we as a family, started running the Butler’s Express? We were all like … yeah! Duh!” Addison said. “Because we went on it when we were little, right. And it was always a part of our childhood Christmas experience.”

The family knew it would be a massive effort, but threw themselves in wholeheartedly. They were helped by a slew of volunteers, each with their own memories of the train.

“We have people that come in, they ask, how can I help? Can I stay?” Cooke’s wife, Dasha, said. “People just keep showing up. They just want to be a part of it.”

Now in their third year, both the No. 8 and the No. 7 trains are back up and running, with massive makeovers. Local businesses helped, often donating or charging only the cost of materials.

“I can’t do this without my family, obviously,” Cooke said. “But, also, everybody from friends and neighbors. I mean, it’s a group effort.”

On a recent train ride, even the blowing of the old-timey horn was enough to draw people out of their homes to yell and wave as the train passed by.

“There are the people that support us, whether it was a lot of lights, or greeted the train every time went above and beyond with love and, and just did 110 percent for us,” Cooke said. “This is my way of giving back to the community — the trains are part of the community.”

Dasha Cooke recalled the reaction the first year they brought the train back.

“As soon as we would go around, the next night, we see people putting up lights on their house, right? All of a sudden we get a text like, Hey, everyone on this street has lights, you know, if you could come down our street. So each day from that first year, it was spreading more and more,” she said.

A little light competition helps things along. This year, there are three categories for best Christmas lights, and the winners take home $100 and bragging rights. But the competition is second-fiddle to the memories.

“You kind of go through this phase where Christmas is just presents and that kind of stuff,” Dasha Cooke said. She said the train helps bring the meaning of Christmas to mind. “Everyone getting together with their family and getting on the train. Making that new tradition or bringing back an old one.”

Residents who rode on the train as children are now bringing their children.

“I remember feeling excited to be on the train. And now I see little kids coming on the train and they’re so excited,” Addison Cooke said.

Continuing the legacy, and making their own, is one reason the Cookes are sure the trains are a lifelong endeavor for them.

“I would say this is a growing thing. We didn’t start it; we’re just finishing it. We’re continuing it,” Cooke said. “When I’m dead and gone… I’m not the one that created them. But I’m the one that brought them back. And I will be remembered for that. That’s it’s such a cool thing to say in life that hey, I was here, and this is what I did. And as you get older, you kind of get more sentimental about that kind of thing.”

“I think it’s wonderful and I appreciate him — all of them. Because I know this is what David always loved to do. And so I figured you know, it’s his legacy — it’s going on,” she said.

Face masks are provided for those who need them.