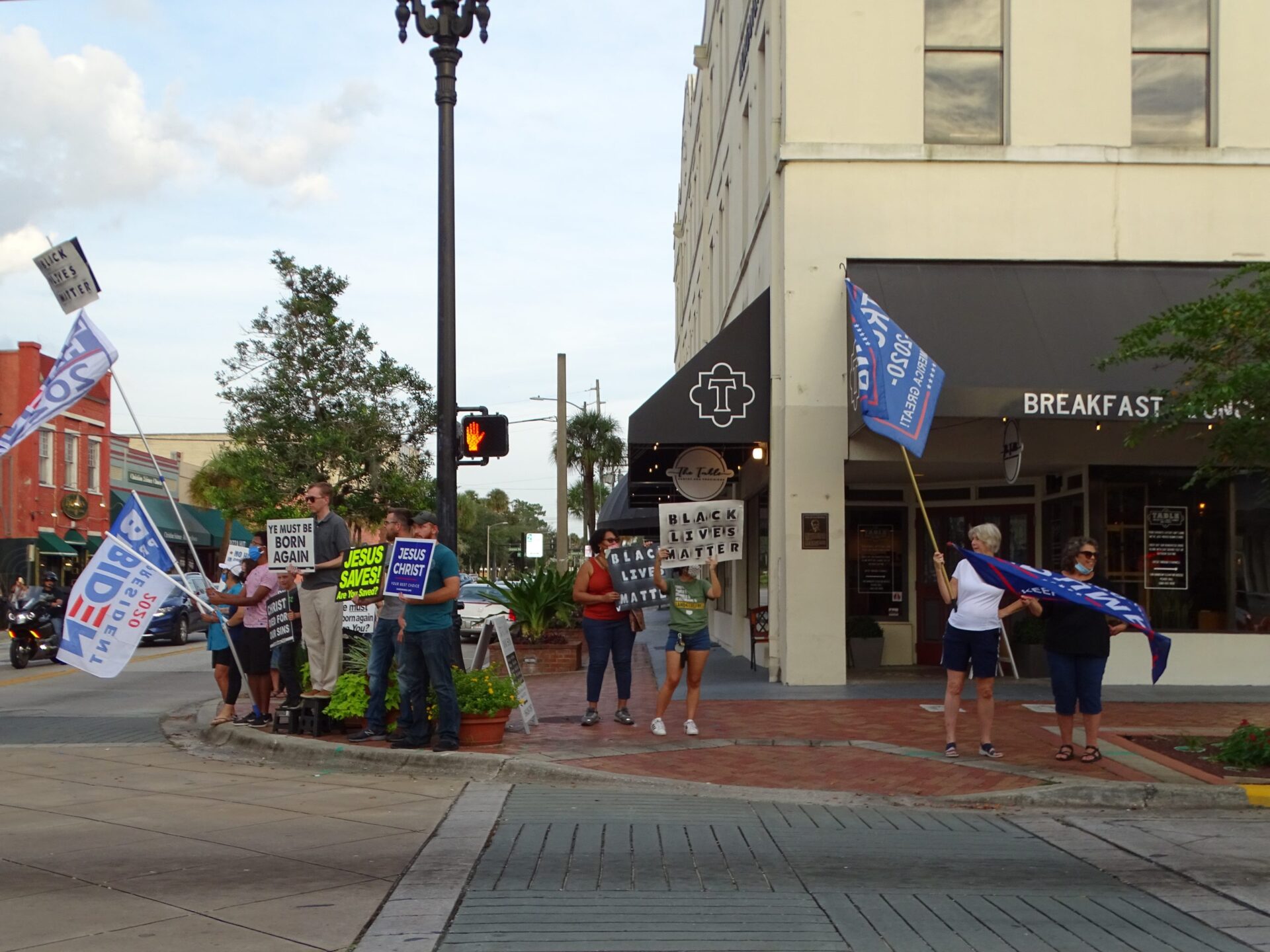 This week, we’re looking back on a strange year of fast and furious — and often conflicting — information. While we spent long days at home, often missing friends, family and our favorite activities, we followed three stories that defined 2020.

A global pandemic upended daily life for billions. For the first two-and-a-half months of the year, events seemed to unfold outside our corner of the world. Then, suddenly, in mid-March, life was changed drastically, even in West Volusia.

SCENES FROM 2020 — Masks became part of our regular apparel in 2020, as demonstrated by DeLandites Magda Hiller and her daughter, Wyatt Wilson, accompanied by their dog, Stevie Nicks. Their portrait is a part of a series shot by DeLandites Courtney and Kelly Canova, of the Canovas Photography, to document people staying at home during the lockdown that affected West Volusia earlier this year. While at home, Hiller and Wilson were among dozens of West Volusians who sewed masks for others.

Businesses were shuttered, residents were told to shelter in place, and the ties that hold us together as a community were tested. We learned how to really wash our hands, and began doing so frequently and furiously.

Birthdays and other occasions became drive-by affairs. We were still there for each other even if we couldn’t hug or shake hands.

At first, we were hopeful the situation would be resolved, perhaps “by summer” or even as early as by the beginning of May.

But as time stretched on, it became obvious that the novel coronavirus would stay too long, like a family who prolong their visit during the holidays. Tensions grew, as we were simultaneously forced together and forced apart by the threat of coronavirus.

The unemployment rate in Volusia County peaked in April at 14.6 percent, and the Florida website for unemployment benefits wasn’t working. Nationally and locally, residents were online and hungry for news.

A block party in the Spring Hill neighborhood of southwest DeLand that ended in chaos exploded into a national news story, when, in response to a Beacon article, the Volusia County Sheriff’s Office released a video more than 12 minutes long that featured Air One helicopter footage of crowds of people. The Sheriff’s Office posted on social media the perspective of deputies who responded to the party, via the officers’ body-camera footage.

The images of thousands of people gathered for an outdoor party astounded residents in different parts of the country where lockdowns were more strenuous.

But soon, the conversation changed from the size of the crowd to the apparent racial tension between officers and members of the predominantly black neighborhood.

Attendees at the block party believed the law-enforcement response during the night was racially motivated, including the arrest of seven people. The Volusia County Sheriff’s Office strenuously objected to that view.

Only a week later, race relations were thrust into the forefront of national consciousness, when George Floyd was killed in Minneapolis after an officer rested a knee on Floyd’s neck for 8 minutes and 46 seconds, suffocating Floyd.

There were protests worldwide and in West Volusia cities.

Juneteenth, a celebration of the end of slavery in the United States, again brought people together — albeit masked and socially distanced.

In September, 28-year-old Joseph Griffin, a former staff sergeant in the U.S. Army and currently a nurse manager at a hospital ICU, was stopped in Deltona and held handcuffed on the side of a busy road. Officers said Griffin — who was out for a run — fit the description of a man accused of stealing a leaf blower.

Not long afterward, another man was arrested in the theft.

After The Beacon published an article about Griffin’s experience, he was invited by Volusia County Sheriff Mike Chitwood to speak at a series of implicit-bias-training workshops for Sheriff’s Office staff, which he did in October.

VOTERS — Eric McClendon and Monica Simpson pause after voting at DeLand Middle School to talk with The Beacon about why they cast ballots. McClendon said he is a convicted felon who was voting for the first time after having his rights restored. Simpson, who said she is the mother of a 12-year-old who fears she could be killed because of her skin color, said she came out to vote against a president who teaches hatred and divisive bigotry. Both were optimistic about getting the country back to prouder and happier times. “We need to remain optimistic. We’re Americans, we’re the greatest,” McClendon said.

And, of course, there was an election.

Reflecting a national diversity of passionate opinions, residents stood on the busy corner of New York Avenue and Woodland Boulevard in Downtown DeLand, holding signs to advertise their beliefs.

In an upset, DeLeon Springs farmer Jeff Brower defeated County Council veteran Deb Denys. Brower’s election reflected a trend that had played out in city meetings throughout the year, as residents came out in large numbers to protest development in Orange City, DeLand and Deltona — efforts that nearly universally failed to stop those developments.

In an interview after his surprise win, Brower called his election an “anti-development mandate.” What he’ll do with that mandate will likely be one of 2021’s top stories.

Without regard to political party — including those registered with no party affiliation — Volusia County voters were clear on two ballot questions: The conservation programs Volusia Forever and ECHO were given the green light to continue to collect tax dollars for 20 more years.

GIVING, GIVING, GIVING — Dr. Ratan Ahuja and JoyceMarie Jones are ready to give bags of food to neighbors in need at a holiday giveaway hosted Dec. 18 by Florida Cardiopulmonary Center in Orange City. The Beacon covered dozens of stories this year about people helping people, involving thousands of individuals, as West Volusians attempted to ease the pain caused by pandemic-related unemployment and business shutdowns. People sewed masks, raised money, cooked and gave away food, and staged COVID-19-safe celebrations to help.