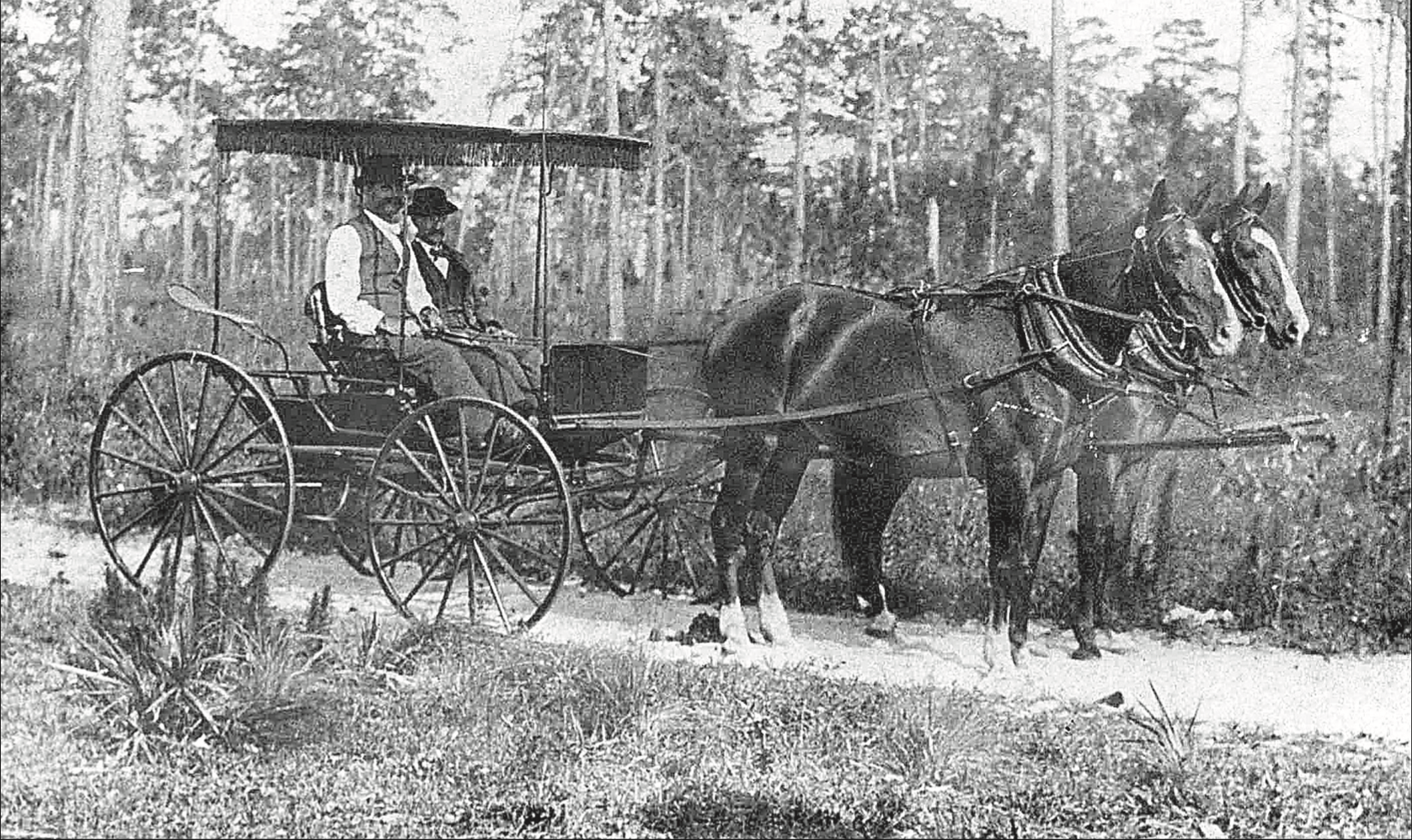 Editor’s note: Welcome to our feature, “Better Country Beyond,” with excerpts from DeLandite Karen Ryder’s book about the early days of the founding of the City of DeLand.

The Beacon is indebted to Donna Jean Flood, a DeLand financial adviser with Edward Jones, for the idea for this series, part of our ongoing West Volusia Memories series by community writers.

DeLand wasn’t for everyone. Some early settlers came to realize that trying to wrest a livelihood from the nutrient-poor sand in backwoods Central Florida was not for them. They were simply hanging on, hopeful that a buyer would come along so they could sell the property and return to their former lives.

Oliver Terry, a boardinghouse owner who had been enticed to Florida by the stories of John Rich and Cyrenius Wright, made a trip back to the home he still kept in South Carolina.

In March of 1876, Mr. and Mrs. Oliver Terry were visited in their Walterboro, South Carolina, home by Mrs. Terry’s brother — a man named Henry Addison DeLand.

This man would become a person who would offer the entire Persimmon Hollow area settlement a transforming vision for their future, and have a town named after him.

DeLand was born Oct. 25, 1834, in Newark, New York. In 1854, when Volusia County was officially established, DeLand was just 20 years old and about to join the manufacturing business of his elder half brother Daniel in Fairport, New York.

The major product of the DeLand Chemical Co. was called Saleratus in that day. The chemical component of Saleratus, sodium bicarbonate, is known today as “baking soda.”

In 1872, Daniel DeLand fell to his death down the factory elevator shaft, and Henry DeLand continued as a partner in the firm with his nephew Levi DeLand, Daniel’s son, just at the time it was becoming the largest manufacturer of Saleratus in the nation.

The company’s “Cap Sheaf Soda” brand was seen in the cupboards of many American households. With great pride, Fairport’s business community declared that Henry DeLand “sold more baking soda than any man alive.”

By 1876, Henry DeLand was a wealthy 41-year-old man. He had been engaged in the management of the DeLand Chemical Co. for more than 20 years, and had never taken a single vacation.

In March of that year, he decided to take some time off.

He planned to do nothing more than take a train trip with his family to visit his sister Martha, Mrs. Oliver Terry, in Walterboro, South Carolina, so he could relax and do some sightseeing.

When the DeLand family reached Walterboro and began their visit, it was quickly apparent that Henry DeLand’s brother-in-law was in the honeymoon stage of infatuation with citrus culture.

“I found that he had really got the ‘orange fever’ the year previous [when he] and some others who were formerly from the north took up homesteads” in the Persimmon Hollow area, DeLand wrote.

EARLY DAYS — The cabin where Capt. John Rich and his wife, Clara, lived and treated visitor Henry DeLand to “lots of fried chicken.”

Like all true believers, Terry wanted DeLand to witness all the excitement going on in the rapidly expanding central region of Florida.

“He urged me to extend my trip to Florida. I did so,” was the succinct way DeLand summarized what led him to come to Florida. “I came without any purpose except sightseeing.”

The voyage from Walterboro to Persimmon Hollow followed a three-legged pattern that was standard for anyone heading to Central Florida in those days. The first leg was a train ride to Jacksonville, which was the southern terminus of the railroad. The family had to travel up the St. Johns River by steamboat in order to get within driving distance of Terry’s homestead in the Persimmon Hollow area.

Once there, DeLand later wrote, “Mr. Terry started out with me in a one-horse rig to show me his homestead and those of others where DeLand is now.” The two men followed the primitive trail that led north from Enterprise toward the Wisconsin Settlement (present-day Orange City).

Although riding was her father’s favorite pastime, Helen DeLand noted that, because of the deep sand of the roadbed, the two men had to keep to a plodding pace that was quite different from the fast speeds that he preferred.

Terry pressed on regard- less, believing that once they got to higher elevations, his brother-in-law would find the scenery more to his liking. By Henry DeLand’s account, Terry answered all his passenger’s complaints with one simple phrase, “Better country beyond” — a promise that surely echoes the sentiments of all restless American pioneers since the time the country was founded.

Just when DeLand was reaching the limit of his tolerance, the countryside indeed did begin to change and they entered the towering pinelands of the Volusia ridge. While passing through the Wisconsin settlement that had been founded four years earlier, DeLand saw people busily clearing land and building houses.

As one who valued industry wherever he encountered it, he proclaimed, “This looks like the West. Here is snap and push…I was now quite willing to go on.”

As a measure of just how plodding the journey through the sand had been, Helen DeLand offers the fact that the two men, who had set out from Enterprise at sunrise and, except for the brief visit at Alexander’s Landing, had traveled non- stop to their destination, arrived at the Hollow shortly before noon. It had taken them roughly six hours to travel a total distance of only 14 miles.

WEST VOLUSIA SETTLERS — A group of early settlers and tourists gather near Lake Helen in the 1880s.

Henry DeLand recorded that his first image of the Rich property was of “a ten- acre enclosure with a good, solid fence, some orange trees and lots of chickens.”

Henry DeLand added that “Captain Rich and his charming wife made me feel at home and gave me lots of fried chicken and in every way were most hospitable.”

On this first visit to the Persimmon Hollow area, Henry DeLand noted that he also met “some eight or ten men and their wives who lived out among the pines; their homes scattered in all directions from the little log cabin of Captain Rich.”

The most significant of these encounters is recorded in Henry DeLand’s memoirs when he wrote he “met a couple who had entered the homestead east of Captain Rich’s on which the Putnam House now stands.”

That couple was Fred Hampson and his wife. Upon hearing of their desire to sell their homestead and return to their former home in Brooklyn, New York, DeLand struck a deal with them to buy their property.

The price the two men agreed on was $1,000 for a parcel that contained 159.91 acres of land. The property had east/west boundaries between present-day Amelia and Clara Avenues, and north/south boundaries be- tween Minnesota and New York Avenues.

Despite the lack of clarity about the number of days he actually spent in Persimmon Hollow during that trip, one thing his writing makes abundantly clear— he returned to Fairport feeling greatly excited by the intriguing prospects that had resulted from his first vacation in many years.

She is a contributing author for two previous works: The DeLand Historic Mural Walk published by the Mainstreet DeLand Association, and A Field Guide to DeLand Buildings published by the West Volusia Historical Society.

Her book Better Country Beyond is avail- able for purchase for $29.95 at the West Volusia Historical Society’s Robert M. Conrad Educational & Research Center at 137 W. Michigan Ave., DeLand. All proceeds from the sale benefit the Historical Society. Call 386- 740-6813 for current center hours.