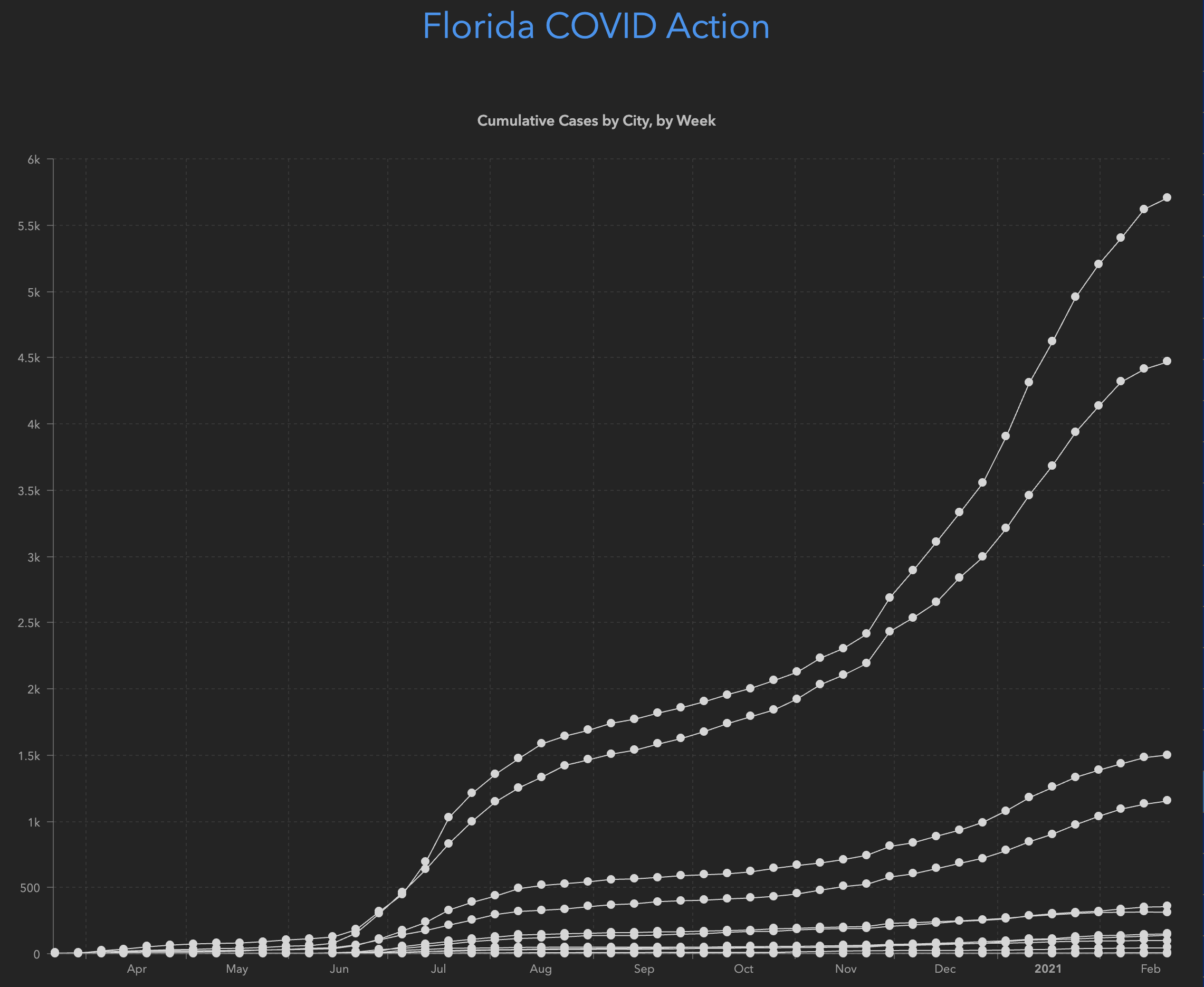 COVID-19 cases are in decline across the nation — but to understand the data, it must be put in context.

Volusia County very roughly tracks with the nation, reporting a precipitous increase directly after the Thanksgiving holiday. The increase continued through December and until late January.

January 2021 marked the most new cases in Volusia County, ever.

Also in January, from the 7th to the 14th, the positivity rate ballooned to more than 11 percent, and the total number of people hospitalized surged to 161.

That week, the Department of Health data shows COVID-19 claimed the lives of 12 Volusia residents. A month later, while new positive cases were beginning to decrease, the seven-day death toll rose to 62.

Since that recent surge, daily positive cases, on average, have declined, the Department of Health said.

Compared to the winter surge numbers, the data is encouraging, Monahan said, but “Even with these declines, however, there were 145 cases reported on Feb. 24.”

The current 119 average new cases per day is quite high, compared with pre-holiday numbers, which tracked closer to 40 to 60 new Volusia County cases a day in September and October.

The number of hospitalizations have also recently dropped off from their alarming January peak, according to data from the Florida Agency for Health Care Administration.

That decline, however, was recently described as a “plateau” by one AdventHealth doctor.

“We’re about plateauing — maybe starting to see a drop in that curve we were on from the winter surge,” Dr. Rebecca Gomez, a hospitalist and the chair of the internal medicine department at AdventHealth Orlando, said in late January.

Another sign that the surge is leveling off is the current positivity rate, which has also dropped, Monahan said.

“The seven-day average of percent positivity is now 5.78 percent in Volusia County,” she said, adding that the total number of tests analyzed has gone up in that same time period.

As of Feb. 25, a total of 36,811 Volusia County residents had received the full series of vaccine shots, representing about 7 percent of the total population.

But the race to vaccinate could face a challenge from new variants of the virus.

If a variant manages to escape the effectiveness of the vaccine, progress made to halting the pandemic may be lost, the CDC warns.

Florida has the highest level of B.1.1.7 variant cases in the nation. The strain, also known as the “U.K. variant,” is more contagious.

Volusia County confirmed our first case of the strain Jan. 27.

As this map illustrates, Florida has the highest number of cases of the B.1.1.7 COVID variant (also known as the “UK variant”) in the nation.

“By the time a variant is detected in a community, it may already be spreading,” she said. “Proven strategies to prevent spread can limit the impact of these variants,” reiterating that COVID-19 protocols — masking up, continuing social distancing, and so on — must still be followed to ensure success in stopping the virus.

Florida’s vaccine effort may soon get a new boost.

The 65-and-up age requirement for the vaccine could be lowered soon, Florida Gov. Ron DeSantis said in a Feb. 25 press conference.

January and February 2021 had daily-death spikes due to COVID-19. Both months had death totals on given days that doubled previous highs.

Both of these daily-death totals surpassed highs recorded in August, during the post-reopening summer surge.

But how are COVID-19 deaths determined?

The office is tasked by state statute to determine the cause of death in COVID-19 cases, because it is a “disease constituting a threat to public health.”

“An investigation by our office does not necessarily mean the body is examined by our board-certified pathologists,” Orozco added.

The ME may also exclusively review the decedent’s medical records, she said.

If, for instance, the death is associated with a hospitalization with the primary diagnosis of COVID-19, a body examination may not be necessary.

The death toll from COVID-19 has strained resources, especially because the Volusia County Medical Examiner’s Office long ago had outgrown its space.

In the meantime, how is the Medical Examiner’s Office coping?

“Within the building, there is a cooler where 20-25 decedents can be stored,” Operations Manager Orozco said, describing the ME’s current capacity. “Volusia County also owns a refrigerated trailer that is designed to store 20 decedents.”

This graph shows the deaths in Volusia County due to COVID-19. Deaths spiked in both January and February, after a rise in positive cases the month before.