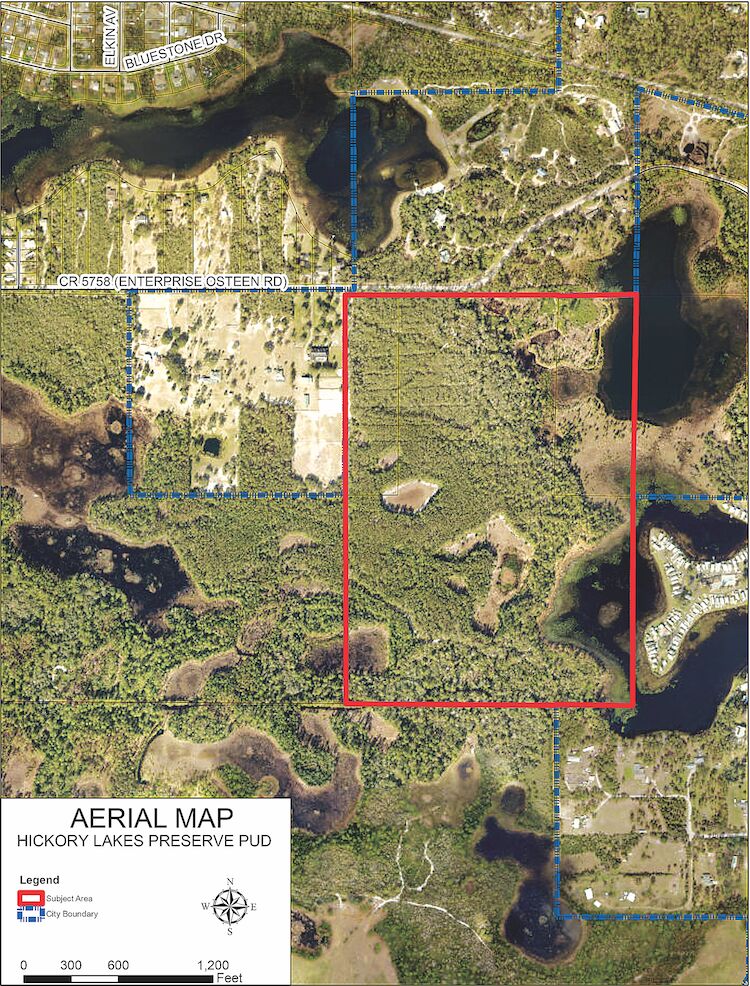 Deltona’s Planning and Zoning Board gave thumbs-down to a proposal to create another subdivision in a now-rural setting on Deltona’s southeast side, but the City Commission will have the final word later this month.

“The property is vacant and in a natural condition,” reads a report from the city’s planning staff.

A Lake Mary developer, Osteen Acquisitions Group LLC, is seeking a rezoning of the 110-acre parcel to allow 189 single-family homes. The proposed new development was previously designated for planning purposes as Enterprise Osteen West, but its new name is Hickory Lakes Preserve.

The land, located along Enterprise Osteen Road, was annexed into Deltona in 2006, but the city never changed its zoning, and it currently has Volusia County agricultural zoning. The landowner/developer is asking Deltona to change the zoning to RPUD, meaning residential planned-unit development.

Hickory Lakes Preserve would be close to the Osteen joint-planning area, a special zone established by a 2009 agreement between Deltona and Volusia County.

Because of fears of urban sprawl into the countryside — and to head off future annexations by Deltona into the undeveloped and agricultural area along State Road 415 —- the city and county entered into a pact to guide the growth.

Briefly stated, the Osteen agreement calls for a downtown area, with a business district, offices and even a high-technology element to coexist with what is left of the historic Florida frontier that includes pastures for cattle and horses.

Osteen isn’t a city, but is an unincorporated community in the county.

The developer’s original request called for 221 homes, but the limit was reduced because of concerns about impacting a flood plain. The land is bounded on its east side by Little Lake.

“There were a few lots that did have flood plain on them,” Deltona Planning and Development Services Director Ron Paradise said.

Some in Osteen object

Some people living in Osteen oppose the advent of a suburban neighborhood into rural and sparsely populated surroundings.

Whereas many parcels in the area now range between 1 acre and several acres, the proposed size of the homesites planned in Hickory Lakes Preserve is about 6,000 square feet. Most of the lots are to be 50 feet wide and 120 feet deep.

“We believe there is competent and substantial evidence in the record that you should deny this,” Shepard told the Planning and Zoning Board Feb. 17.

In addition to noting the seeming incompatibility of Hickory Lakes Preserve in the area, Shepard said the project would have a negative effect on the environment, including wildlife.

“It’s something that doesn’t fit the character of the area,” Planning and Zoning Board Member Michael Bowman said.

Another member of the board, Ruben Munoz, spoke in favor of the rezoning request.

“When you buy property, you have the right to make changes,” he said. “To me, approval is the way to go.”

The Planning and Zoning Board voted 5-2 to recommend that the Deltona City Commission deny rezoning the property for a PUD. Munoz and Alternate Board Member Susan Berk voted in favor of supporting the zoning change.

The Deltona City Commission will act on the request to approve Hickory Lakes Preserve on Monday, March 15. The commission’s meeting begins at 6:30 p.m. at Deltona City Hall, 2345 Providence Blvd. The meeting is open to the public.