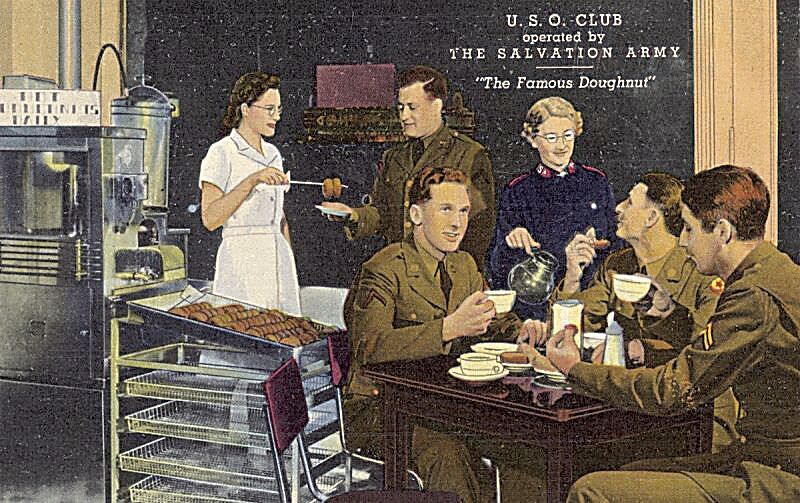 Do you feel old?

Perhaps you’re not as old as the USO, an alliance of private social-service agencies born in the American military buildup of World War II.

The USO has turned 80, and a local group of military officers recently celebrated the birthday.

The United Service Organizations, more commonly known by its initials, became a sort of home away from home for millions of American military personnel in training for war and stationed stateside or serving overseas.

The USO came into being as the nation mobilized with its first peacetime draft, which brought large numbers of young men into the armed forces, beginning with the enactment of the Selective Service Act in September 1940.

As more young draftees and volunteers left their homes for bases across the country, military and civilian leaders wondered how to raise and sustain their morale as they waited to be deployed against the Axis powers.

A HISTORY LESSON — With the help of technology, Ray Parker, at right, guides the conversation between the Military Officers CLub of Volusia County and the USO’s Annamae Kacsandi, appearing virtually at the bottom of the video screen. Parker, a decorated Vietnam War veteran, is first vice president of the club, and Kacsandi is central operations supervisor at the USO’s center at Orlando International Airport. At top left on the screen is Raul Gonzalez, president of the Military Officers Club.

At the urging of then-President Franklin D. Roosevelt, six civilian organizations — the YMCA, the YWCA, the Jewish Welfare Board, the National Catholic Community Services, the Salvation Army and the Travelers Aid Association — joined forces to form the USO.

On Feb. 4, 1941, the Congress granted a charter to the USO to fulfill its mission of meeting the social and spiritual needs of the rapidly expanding military services.

Later, the USO would become well-known for bringing entertainment to the soldiers, sailors, airmen and Marines close to the front lines. Stars such as Bob Hope, Marilyn Monroe and Marlene Dietrich — representing what is now known as “the golden age of the USO” — brought cheer and a respite to Americans longing for home and fighting for survival of their fellow warriors, their country and themselves.

CLASS IS IN SESSION — Ray Parker, right, facilitates discussion between members of the Military Officers Club attending in person, and those appearing virtually. On screen are the USO’s Annamae Kacsandi and Raul Gonzalez, president of the Military Officers Club.and Annamae Kacsandi regarding the USO, its history and its facility for departing and arriving armed-forces personnel at OIA.

Through the years of World War II, the Korean War, the Cold War and the Vietnam War, up to the War on Terror and the wars in Iraq and Afghanistan, the USO’s mission has not changed, just as the needs of Americans stationed far from home have not changed.

The Military Officers Club of West Volusia celebrated the USO’s 80th birthday by recapping the history of the group and talking with Annamae Kacsandi, director of the USO’s Welcome Center at Orlando International Airport.

Kacsandi heads a staff of four at the USO center at the airport, through which thousands of military men and women pass on their way to or returning from deployment abroad.

“It’s just trying to help our service members on their journey,” Kacsandi said, “just to say, ‘Thank you.’”

Along with the lounge for adults, the Orlando USO center has a “dedicated kids’ space” for children whose parents are leaving for or returning from deployments.

Kacsandi also said the USO has 250 locations spread out on all seven of the Earth’s continents, including Antarctica. Though it aids military personnel, the USO, she noted, receives no funding from the U.S. Department of Defense.