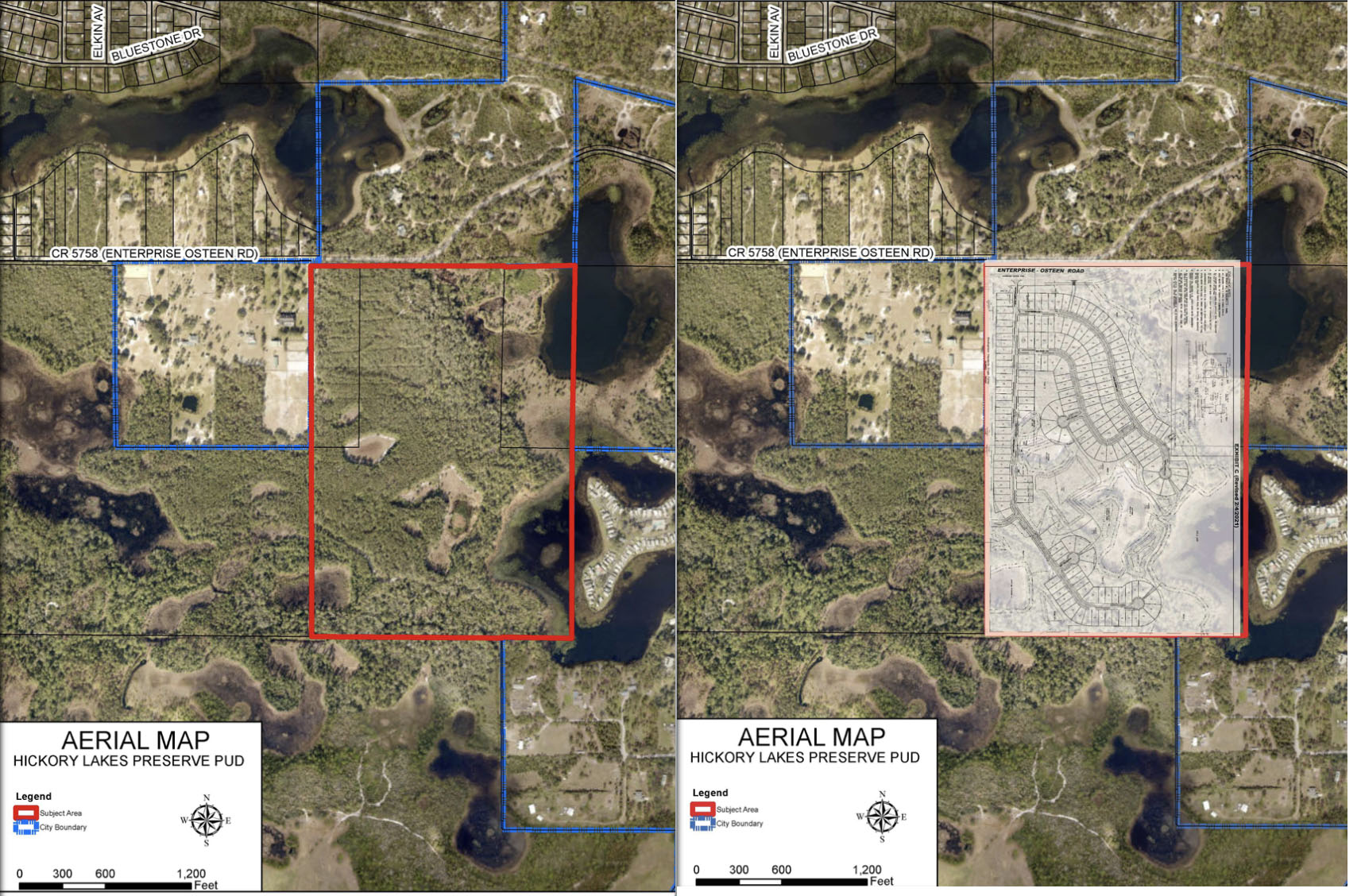 A Deltona development near Osteen illustrates clearly the tension between those who feel the need for more housing, and those who want to protect West Volusia’s rural landscapes.

By a 4-3 vote March 15, the Deltona City Commission agreed to rezone 110 acres along Enterprise Osteen Road for a 189-home development being called Hickory Lakes Preserve.

The rezoning changed how many homes could be built per acre, from one to as many as six.

Neighbors weren’t pleased. They hired Orlando attorney Cliff Shepard to argue for them at the City Commission meeting.

“This is urban sprawl,” Shepard told city commissioners. “You’re putting 189 homes in an area that is nothing like it.”

But Hickory Lakes Preserve, according to the developer’s attorney, Mark Watts, is consistent with Deltona’s state-mandated growth-management plan, also known as the comprehensive plan, or comp plan, for short.

The developer had first asked to build 226 homes, but Deltona Planning and Development Services Director Ron Paradise said the number was scaled down by 15 percent to 189 “to minimize impacts on a flood plain.”

The parcel abuts Little Lake, and has wetlands. The wet portions cover approximately 30 acres of the property.

”We are staying out of the wetland/marsh areas,” Watts said.

Watts also said Hickory Lakes will be set apart from surrounding lands and from traffic along Enterprise Osteen Road.

“We’ve got a 75-foot natural vegetation buffer,” he noted.

In any case, Paradise said Deltona has “adequate infrastructure to support development” of the land. Infrastructure refers specifically to roads, schools and water-and-sewage systems.

City Commissioner Loren King questioned a traffic study accompanying the rezoning request. Although the traffic analysis is more than 2 years old, he said, Hickory Lakes Preserve would add “about 2,300 average trips per day” on the 2.5-mile stretch of Enterprise Osteen Road between Reed Ellis Road and S.R. 415.

Over two hours of debate, opposition from those attending the public hearing was vocal.

“You are going to destroy a scenic corridor,” Planning and Zoning Board Member and former County Council Member Pat Northey said. “This doesn’t fit — 189 homes in rural residential.”

COUNTRYSIDE CONSUMPTION — Orlando attorney Cliff Shepard speaks for Osteenites who object to a rezoning for a new densely packed neighborhood on Deltona’s south side and closer to their farms and rural homesites. The attorney referred to the development, called Hickory Lakes Preserve, as “textbook sprawl.” The City Commission gave tentative approval to the developer’s request March 15. A final pub- lic hearing and vote by the commission on the proposed subdivision, known as Hickory Lakes Preserve, is set for April 19.

In February, the Deltona Planning and Zoning Board voted 5-2 to recommend the City Commission reject Hickory Lakes Preserve.

County Chair Jeff Brower also spoke out on the project, but he stressed he was speaking for himself, not as an official of the county government.

“You have the chance to decide the future of Volusia County,” he began.

Brower suggested Deltona’s leaders work to create something such as an ecotourism or agricultural attraction that would fit into Osteen’s rustic setting and draw visitors from far and near.

“That is valuable land,” Brower said. “I’m saying, let’s send it back. … if there’s wetlands, we grow water buffalo there, and I’m not kidding.”

The rezoning approval came in a 4-3 vote. When the time came for the City Commission to decide, Mayor Heidi Herzberg, Vice Mayor Anita Bradford and Commissioners Maritza Avila-Vazquez and Victor Ramos formed the majority in favor. Commissioners King, Dana McCool and David Sosa voted against the development.

And, it’s not over. The City Commission will conduct another public hearing and vote on the Hickory Lakes Preserve project Monday, April 19. If the governing body again votes yes, Shepard said, he may go to court to overturn the action. Such a civil suit, Shepard said, would be filed in Volusia County Circuit Court.