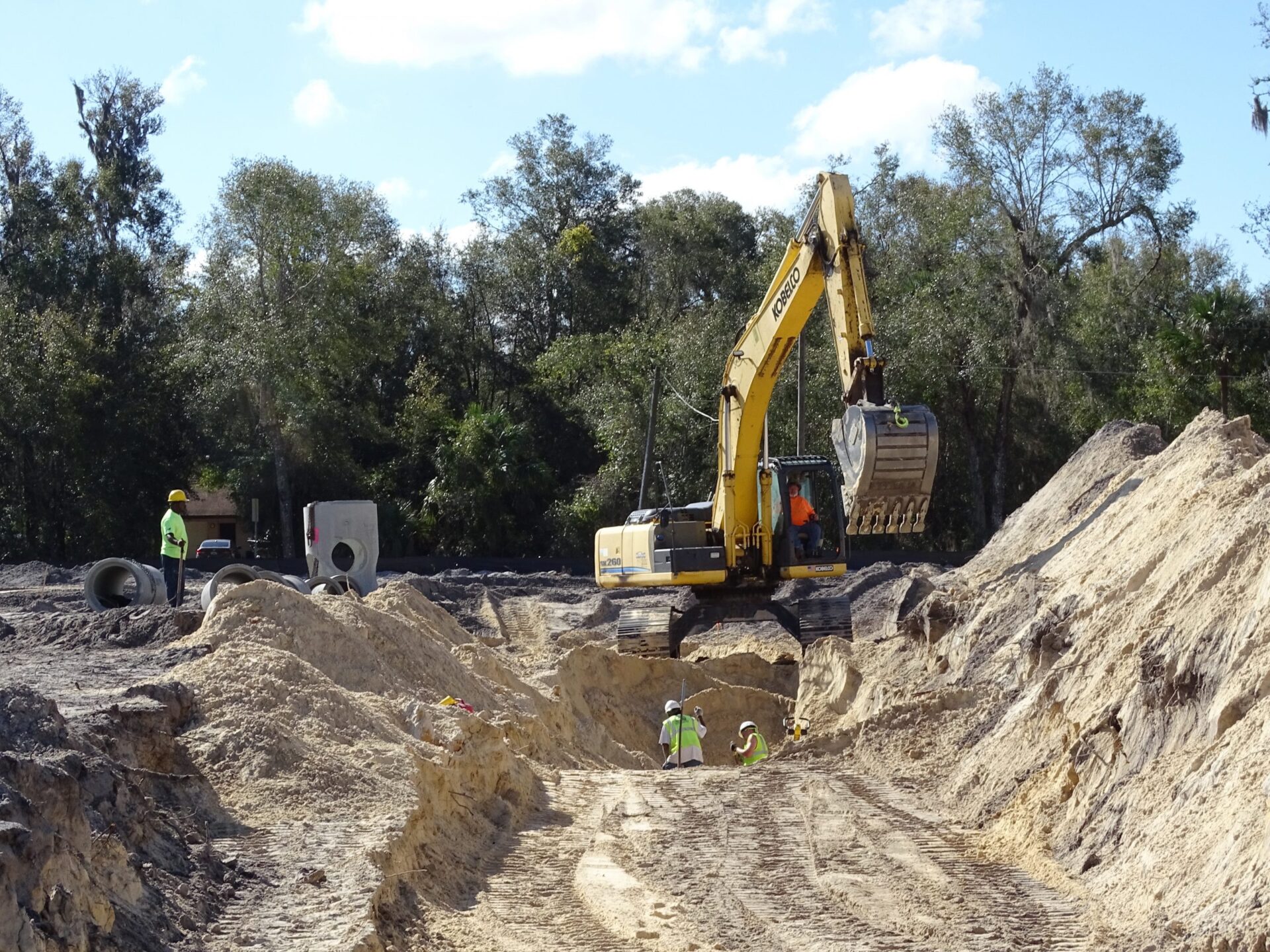 This was a comment posted on a recent Beacon story about development in DeLand.

While the assessment may seem harsh, many in and around DeLand have expressed this sentiment when it comes to the booming growth — enough is enough.

Should DeLand put up a “Closed” sign at its boundaries? What kind of power do cities have to control development?

Ervin is director of the Volusia County Department of Growth and Resource Management. A fourth-generation Floridian, Ervin understands the desire to keep Florida’s land picturesque and free of urban sprawl.

But these developments aren’t popping up for no reason, Ervin said.

“We’re victims of our own attractiveness,” he said. “It’s a beautiful area, it’s got great resources, and folks want to move here.”

When a developer notices this, they first have to take a look at the future land-use map. While the empty plot of land next to your house may have been vacant for years, Ervin said, if it isn’t owned by government or a conservation agency, it has at least some potential to be developed.

But what if people want to keep that land free of a housing subdivision? It’s not always as simple as just saying “no.”

In some cases, DeLand Mayor Bob Apgar said, a city’s hands are tied. A “no” from the City Commission does not necessarily mean a development plan disappears.

“There’s an assumption by some that the property might remain undeveloped,” Apgar said. “That’s not the case.”

Apgar used the example of the Integra Dunes apartment complex along the Dr. Martin Luther King Jr. Beltway, near Victoria Park. While technically not in the city — due to “quirks,” as Apgar put it, in utility services — the apartment complex is not far from city limits. While the city wasn’t involved in planning or controlling the development, Integra Dunes residents will use DeLand roads and other public services.

Another problem? Saying “no” to a development just because the city dislikes it leaves the city wide open for a lawsuit.

“If the government takes an action that diminishes the realistic economic expectation of a landowner, the landowner can and should be reimbursed and paid for that diminution of value,” Clay Ervin said. “That’s why you see sometimes that local governments are hesitant to make changes that reduce the entitlements allowed by the future land-use map.”

Simply put, if a landowner can prove that government action affected their ability to make money from their property, the government must reimburse them. In many cases, that gives a green light on development.

Another big shift was dissolution of the state Department of Community Affairs in 2011.

Before it was dissolved, the DCA served as a final roadblock for developers. Changing the land use on vacant land so you can put up 700 homes? Developers needed to provide analysis to justify an increase in density, and local governments needed to assure the state they were ready and able to provide the schools, roads, police, utilities and so on to serve the development.

Without DCA’s OK, a local development could be slowed, modified or even stopped.

But why should Tallahassee, some argued, govern where people could build in Volusia County? Tallahassee, others argued, had more teeth than local governments.

“The Legislature has continued to take away the tools local governments have to manage growth more effectively, or to be able to say no in certain circumstances. I think it’s really kind of unfair to blame the local government for that,” development attorney Mark Watts said. “They’re doing what they can with the tools they have available.”

Watts is an attorney with Cobb Cole, an agency representing many developers on many West Volusia projects.

It’s not as simple as city commissioners being forced to say yes to anything a developer brings before them for fear of legal action, though.

“Every project that comes through has to look at road capacity, water capacity, sewer capacity, school capacity, all of those things,” Watts said. “Each of those projects needs to pay impact fees to each of those classifications to fund capital improvements.”

What can you do?

It’s a familiar cycle — a development is introduced to a city’s planning board, and neighbors and other locals protest it. People speak out at meetings, gather signatures on petitions, post on social media. Yet, often, the development still gets the green light, even if city officials are hesitant.

“When you see something that winds up in front of your local elected officials, you’re not seeing the 20 other proposals where staff said, ‘This won’t work,’” county growth director Ervin said. “One of the things that, unfortunately, people don’t understand, is we have pre-application processes where folks will say, ‘That’s not feasible,’ and they’ll say, ‘OK, what do I have to do?’”

Ervin recognized that people generally don’t have the time to be involved in the entire, probably monthslong if not years-long, process.

“This is complicated stuff,” he said. “Unfortunately, most of the public don’t have the time to dig into this highly complicated world. They’re busy working to keep their house afloat and enjoy life. The last thing you want to do is come down to my office and go through a bunch of stale bureaucratic documents.”

But one person’s fiery comment at a Planning Board meeting still helps guide the process; it just isn’t the only variable.

“As we work through the development process, one of the keys we focus on is looking at all of those interests,” Watts said. “We always try and work well with our neighbors.”

For better or for worse, Volusia County is an attractive place to move to.

There are ups and downs to a growing population. A larger market of people may attract well-known chain restaurants and big-box stores closer to your home, but there will be more children in school, more calls to the police, and more cars on the road.

If you want a Panera Bread, Apgar said, the area has to have the population and growth to support it.

Volusia County, according to Ervin, is currently home to 551,000 residents. In the next 25 years, population projections indicate that number could grow by as much as 100,000. But, he said, Volusia is still not one of the state’s fastest growing counties.

Even with more and more growth, Apgar said, he still hears from friends that DeLand “feels” the way the city did decades ago.

Want to preserve that feeling? Get involved, go to meetings and fight the uphill battle of reading the “stale, bureaucratic documents” that govern West Volusia’s land.

The DeLand City Commission meets at 7 p.m. on the first and third Monday of every month at DeLand City Hall, 120 S. Florida Ave.

The DeLand Planning Board meets at 5 p.m. on the third Wednesday of every month at DeLand City Hall.

Also, government meetings open to the public in West Volusia are listed in The Beacon’s Government Calendar on our Opinions page each week.

Around the year 2000, the city of Lake Helen was examining its utilities and land use to see whether population projections matched what the city had to offer. Turns out, former Mayor Mark Shuttleworth told The Beacon, projections were higher than anticipated.
“Turned out it was about 12,000 people,” he said. “We all freaked out, we said ‘Lake Helen, 12,000 people?’”
It became clear, Shuttleworth said, that if the city were to maintain its Mayberry-esque quiet and charm, measures would have to be taken.
Over the next few years, the city began a rezoning campaign to keep the number of units per property low. Another measure prevented growth in Lake Helen — the city has no central sewage system.
“What this means is you can’t have a multifamily house, a five-story apartment building,” Shuttleworth said. “That’s what we wanted, that traditional village feeling.”
Some of these measures enshrined in Lake Helen’s Comprehensive Land Use Plan have been scaled back over the years, but Lake Helen is still comparatively quiet compared to some of West Volusia’s growing cities.