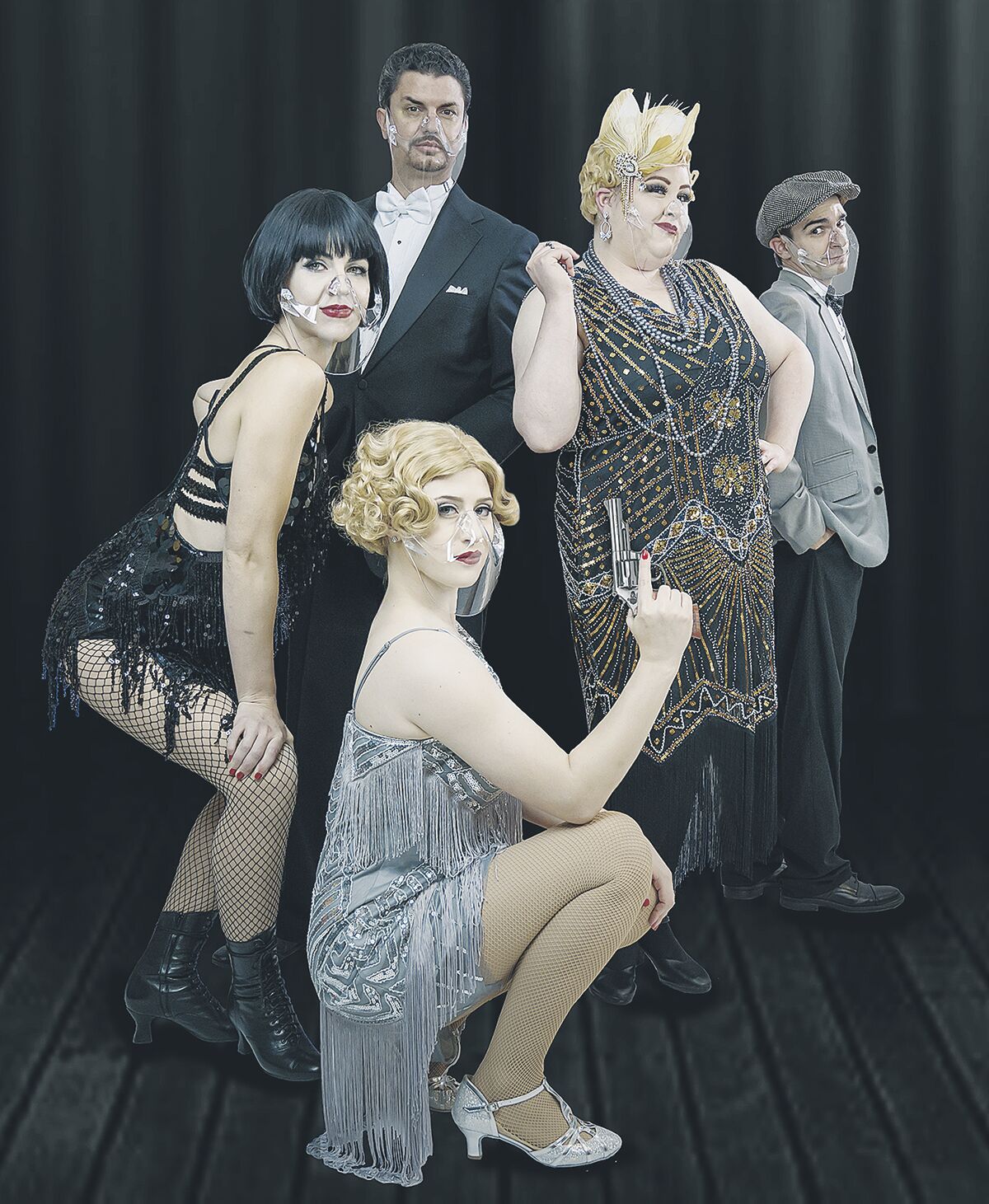 “Start the car, I know a whoopee spot,” and let’s get ready for all the jazz and vaudeville you can handle, as Chicago, the second-longest-running American musical in Broadway history, packs up its “Razzle Dazzle” and brings it to DeLand’s Athens Theatre April 16-May 9.

Roxie Hart (played by Madeline Regier, who also starred in Singin’ in the Rain and The Producers) and Velma Kelly (Athens newcomer Sarah Ruth Joyner) show us the night it all begins — the night our married Roxie “reaches for the gun”… and tries to get her “funny, sunny, honey hubby” Amos (Gavin Waid, who wowed audiences in Into the Woods and 9 to 5) to take the fall for killing her lover.

In the women’s block of Cook County Jail, several other “merry murderesses” are presided over by Matron “Mama” Morton (Anna Banks) the warden, extortionist and blossoming vaudeville booking agent.

Billy promises he can get Roxie off scot-free while turning her into a celebrity. The case becomes a media circus, complete with a ventriloquist act and Roxie’s very own tabloid columnist, Mary Sunshine (Zeshan Khan). “Razzle Dazzle ’em,” Billy says, “and they’ll never catch wise!”

Iconic husband-and-wife creative team Bob Fosse and Gwen Verdon struggled through the ’60s to bring Chicago to life. They finally gained the rights to the play that served as the musical’s basis — the play Chicago by reporter and playwright Maurine Dallas Watkins.

Based on true trials, it shone a spotlight on women offing their husbands and lovers during the 1920s jazz era. The trials were also noted for the long string of acquittals of attractive women whom male juries refused to sentence to death … and the momentary celebrity status of these “not guilty” women.

Fosse and Verdon teamed with the songwriting team of John Kander and Fred Ebb, and the true stories of the notorious women were set to music based on traditional vaudeville songs and performers — and the play became a satire on corruption in criminal justice.

When the musical Chicago opened on Broadway in 1975, audiences were not yet ready for such a savage satire, but when Chicago’s revival hit the stage in 1996, it slayed ’em — and since then has brought in six Tony Awards, two Olivier Awards, a Grammy, and thousands of standing ovations.

Featuring classic vaudevillian musical-theater songs like “Funny Honey,” “Roxie” and “When You’re Good to Momma” — and filled with legendary dance numbers such as “The Hot Honey Rag” and the darkly infectious anthem “Cell Block Tango” — Chicago is sure to make you wanna “paint the town… and, All That Jazz!”

The historic Athens Theatre, which has taken extensive precautions to ensure the safety of its patrons, staff, volunteers and actors, is at 124 N. Florida Ave. in Downtown DeLand. Tickets cost $30 for preferred reserved seating (rows A-E, center); $25 for adults; $23 for senior citizens; $11 for students/children; and $21 per person for groups of eight or more. A $3-per-ticket processing charge will be added to each purchase.

To purchase pairs of tickets in advance or to find out more specific information about dates, times and safety precautions, visit the Athens Theatre website at www.AthensDeLand.com. If you are looking to purchase more than two tickets, call the box office at 386-736-1500 to find a socially distant spot where your whole group can sit together.

Box-office hours are 1-5 p.m. Wednesday-Saturday, and 1 1/2 hours before live performances.